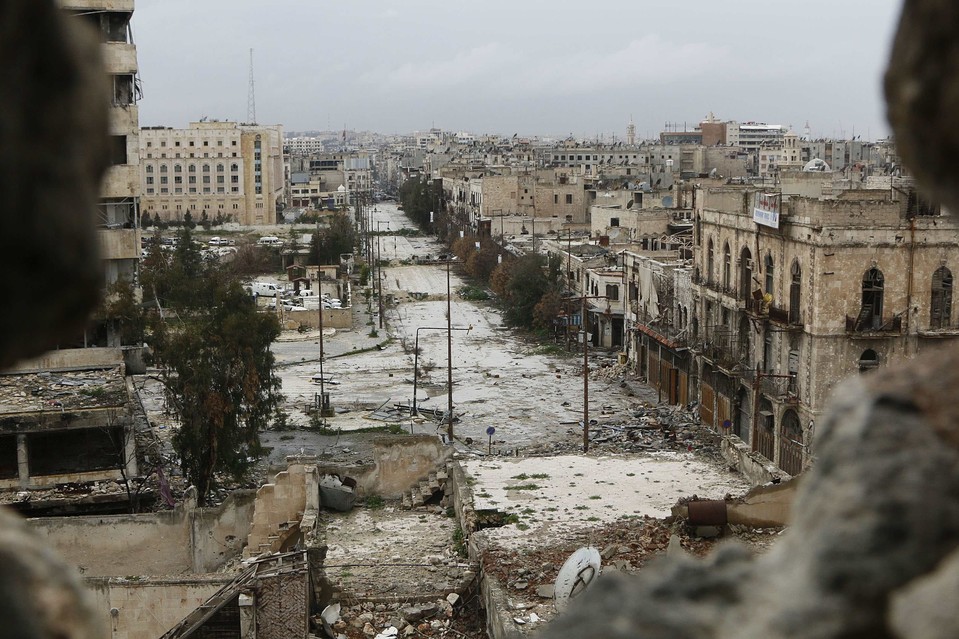 Aleppo, Syria’s largest city, is once again the center of media attention. Two weeks of devastating airstrikes against the rebel-held parts of the city ended on Wednesday after the United States and Russia agreed on a new cessation of hostilities in the city. However, clashes continued in nearby rural areas in southern Aleppo province, and the government and the rebels traded accusations that the truce has already been violated by the other side.

The city faces uncertainty and the scale of violence witnessed over the past two weeks might resume any moment. The deals agreed by the U.S. and Russia since March are dangerously flawed, since the regime has repeatedly increased its use of force just before the agreements are struck to improve its negotiating and tactical positions. A radical approach is necessary, one that views Aleppo as a potential model for peace across Syria rather than as a bargaining chip.

Aleppo will be central to any effort to steer the country toward a positive outcome. The military stalemate in the city has been in place for three years with little change and no end in sight. An agreement to end violence in the city—and more importantly, to force the regime to change its tactic of crippling the city—is the only way forward. Such an agreement should be formulated and firmly supported by Washington and Moscow as part of a long-term strategy to rebuild the city and drive extremists out of it. There are already signs that such a plan is feasible, if the two major countries seriously push for a strategy that helps the regime and the opposition to share Aleppo.

The calm after the storm

In nine days after a shaky truce collapsed two weeks ago, around 150 people were killed—including 19 children and 14 women—by airstrikes that targeted the city’s rebel-held eastern half, according to statistics from the Syrian Observatory for Human Rights. Several health clinics and hospitals were hit in different parts of the areas controlled by the anti-government forces. Local activists report unprecedented destruction and an around-the-clock air campaign targeting non-military targets including residential areas, health facilities, and first responders known as the White Helmets.

“The regime has clearly indicated the willingness, over a period of time now, to attack first responders, to attack health care workers and rescue workers,” Secretary of State John Kerry said on Monday. “And the attack on this hospital is unconscionable, under any standard anywhere. It has to stop.”

Before the latest offensive, violence in the city had been reduced greatly since the United States and Russia agreed on February 27 to a cessation of hostilities in Syria that excluded the Islamic State and al-Qaeda’s Jabhat al-Nusra. The truce was largely observed, especially by the Russian air force, and opposition activists could organize protests to reaffirm commitment to their demands for the removal of Bashar al-Assad. But violations were recorded in most areas; there was merely a reduction, not a true cessation, of hostilities.

The resumption of violence and the kind of targets that had been struck over the past two weeks raise several unanswered questions. Why, for example, did Russia refrain from striking anti-government forces advancing on the Eis hilltop this time last month, even though it was clear that the battle was led by truce-exempted Jabhat al-Nusra? If Russia struck against the forces, that would have had little bearing on a ceasefire that was not wholly upheld in the first place. In contrast, airstrikes inside Aleppo last week have been justified, including indirectly by the Pentagon, by the claim that Jabhat al-Nusra holds the city. Jabhat al-Nusra’s presence in Aleppo is no different from its presence in other towns, such as near Damascus or in Idlib, where such pretext was rejected by Washington.

So what changed Moscow’s calculus? The reason was clearly not the desire to protect the ceasefire from collapsing, since Jabhat al-Nusra was exempted from the deal. The Russians watched as the regime’s forces were being attacked by rebel forces led by Jabhat al-Nusra in the Eis hilltop and adjacent areas. Following the loss in southern Aleppo, Syrian Prime Minister Wael al-Halki claimed that Russia was preparing to resume its support for Damascus through a joint operation to retake Aleppo, a statement promptly rejected by Moscow.

Three main reasons for the escalation can be identified. First, the regime is simply seeking to cripple the city by targeting its critical infrastructure and driving out its population. This is a familiar tactic that, had it had the choice, Damascus would have continued after the major Russian-led offensive in February in northern Aleppo. The offensive in February ended when Moscow abruptly announced a “partial” withdrawal from Syria and agreed to a cessation of hostilities on behalf of the regime. Typically, Damascus would have escalated the violence to further weaken the opposition, which had begun to show serious signs of crumbling in the north.

The second possibility is that Moscow wants to force the Syrian opposition back to the negotiation table after the latter pulled out from the talks two weeks ago. Riad Hijab, the coordinator of the opposition’s High Negotiations Committee (HNC), announced their withdrawal after the regime carried out airstrikes that killed more than 40 civilians in Idlib. The airstrikes hit Maarat al-Numan, where a local Free Syrian Army group clashed with Jabhat al-Nusra, and dozens of its residents took to the streets in favor of the FSA.

The peace process in Geneva had reached a deadlock, and the HNC’s withdrawal angered Moscow. “For God’s sake,” the Russian foreign minister, Sergei Lavrov said at the time, “we shouldn’t be running after them, we must work with those who think not about their career, not about how to please their sponsors abroad, but with those who are ready to think about the destiny of their country.”

A third possibility for the escalation is the regime’s desire to disrupt the peace talks in Geneva. The parties in Geneva had begun to discuss specifics related to the political transition, and the escalation put the opposition’s representatives under immense pressure to abandon the talks as a result of the regime’s attacks, the deadliest since the cessation of hostilities deal started. The regime’s airstrikes mainly targeted civilians, which opposition leaders say increased pressure on them to announce their withdrawal.

To be sure, the motives for escalation could be a combination of these reasons. In general, it is a common trend for the warring sides escalate before or during negotiations. But the regime’s violence is typically excessive, its backers’ support is unconditional and targets tend to be justified as direct at terrorists or their sympathizers.

As the biggest city in Syria, Aleppo is central to peace in the country, especially given its strategic location in the lawless north, where groups such as Jabhat al-Nusra are seeking to entrench themselves, and proximity the Islamic State’s strongholds in the Aleppo eastern countryside and in Raqqa. The city used to have more than two million residents. Today, the rebel-held part has around 250,000 people, while the regime side has more than a million people, according to Hakeem al-Halabi, a civil society leader from Aleppo. The urban center is one of the areas worst hit by the regime’s lethal barrel bombs, and thus a main contributor to the refugee crisis.

Unlike last year, the military situation in Aleppo is more favorable for the international community to turn groups inside the city against extremists.  Last year, Jabhat al-Nusra’s growing strength as a leading faction of Jaish al-Fatah, which made a string of substantial gains against the regime in northern Syria, complicated the effort to integrate the rebels in the fight against the Islamic State in that region, even though Aleppo’s eastern countryside has two of the Islamic State’s most vital strongholds, namely al-Bab and Minbij. Today, Jabhat al-Nusra does not have the same momentum. In Aleppo and neighboring Idlib, tensions between it and other groups have been on the rise. Jabhat al-Nusra has been attempting to dominate in Aleppo, which led to clashes with rebel forces there, including with its putative ally Ahrar al-Sham. If a credible truce is established that ends the regime’s tactics that aim to strangle the city, extremist forces can be marginalized.

Aleppo is controlled mostly by rebel forces that emerged out of the Tawhid Brigade, the coalition that expelled the regime from much of the city in 2012; the group fractured after a draining fight against the Islamic State in 2013-14. The most powerful factions in the city include the Levant Front, the main group inside Aleppo and the northern countryside; the Noureddine al-Zinki Movement, a faction that operates in the city and the western countryside; Jaish al-Mujahideen, based in the western countryside of Aleppo; and the Fastaqim Coalition, which fights throughout the city.

Jabhat al-Nusra has a nebulous yet important presence in the city. Although it does not hold territory, it controls vital services and institutions, such as the electricity company and the sharia commission. Its sharia commission serves as a parallel system to the civil society groups operating in Aleppo. Jabhat al-Nusra’s presence in the city is relatively new. A previous local faction affiliated to it had pledged allegiance to the Islamic State and was driven out in early 2014. The group then began to build new influence, and was successful to a large degree last year with the rise of Jaish al-Fatah.

Jabhat al-Nusra is widely rejected by citizens of the city, and clashes with local groups are not infrequent. Representatives of different groups have expressed a willingness to challenge Jabhat al-Nusra, but the regime’s bombardment and the worsening situation in Aleppo makes it impossible for fighters to fight on two fronts.

Although the HNC walked out of the peace talks in Geneva, it still has a technical team in place to discuss the process with the United Nations and international powers. The United States continues to appeal to the Russians to deescalate violence and to include Aleppo in a new cessation of hostility deal, dubbed as “regime of silence,” that currently includes Latakia in western Syria and East Ghouta near Damascus. The opposition is seeking to rectify major flaws in the deal, primarily the absence of a mechanism to report and end violations and the lack of clarity about the location of factions that will be not targeted. Failure to do so makes it harder to monitor and punish violations, which the regime might commit under the pretext that it is targeting extremist forces.

The international community can present a different model for Aleppo that moves away from continued bombardment and attempts to encircle or counter-encircle the opposite side. This model should put an end to the regime’s indiscriminate tactics and help people from Aleppo return to rebuild their neighborhoods, and for the rebels to refrain from bombing civilian areas under the regime control. Such a situation will undoubtedly shift the focus onto Jabhat al-Nusra, as it did in Idlib last month when armed groups and civilians rose up against al-Qaeda’s local branch after violence was reduced there.

The alternative is a deadly stalemate. Despite hundreds of attempts, the regime failed to retake the parts of the city it lost to the rebels in 2012, even when its army was still strong. It is unlikely to succeed today with an army that relies heavily on foreign militias to conduct its war, especially outside its heartlands in western, central and southern Syria. Damascus sees no benefit in alleviating the suffering of the population of Aleppo or turning its people against extremists. On the contrary, it may oppose any attempt to make that happen, as such a scenario will undermine its narrative that it is fighting terrorists. So, the onus is on the United States and its “Russian partners” to turn Aleppo from a living tragedy to a model for all of Syria.