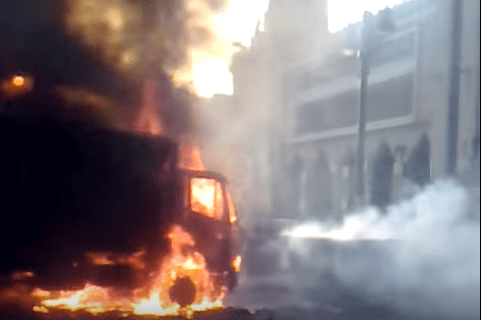 A police vehicle burns near Matariya Square on January 28, 2011. (Video still via YouTube)

Six years after the January 2011 revolution in Egypt, much of what has been written focuses largely on analyzing the events, limiting the analysis to the moment of January 25, in line with the discourse which confines the uprising by calling it the “January 25 Revolution.” This limited scope ignores another moment within the course of events no less important than that of January 25: the moment of January 28.

I believe that the current stagnation gives us an opportunity to look at the events from a distance, allowing us to see more clearly. The dominant discourse on January 25 assumes that the uprising of 2011 was a youth-led, nonviolent revolution whose participants were mobilized on social media, and that the leaders were well-educated, resembling their counterparts in the west. While important, this approach only tells one side of the story. It falls short of explaining why the Egyptian masses who do not have Internet access either joined the movement in Tahrir Square, or chose to fight the state in different ways like storming the local police stations in Cairo’s popular quarters.

The Popular Quarters, from Welfare to Neoliberalism

Matariya is one of those popular quarters which witnessed the most number of causalities in Cairo in the clashes of January 28, between the people and the police station. It is also where I was born and raised. Throughout my years there, I’ve witnessed the manifestation of government in the neighborhood limited to the local police station. For the people of Matariya, uniformed personnel were not just agents of the Ministry of Interior, which is in turn part of the executive authority; they were the actual government. As in all popular quarters, police personnel were referred to as al-Hokoma—the Government.

The government being limited to the local police station has to be understood through the development of the popular quarters themselves. Popular quarters, which emerged rapidly after 1970, were where Nasser attempted to create Egypt’s modern middle class. An important component of Nasser’s welfare state model was popular housing (al-masaken al-sha’biyya). Popular housing projects were set up in poor neighborhoods on the outskirts of the city of Cairo; Matariya is at the northeast border of Cairo, separating it from Qalyubya. The government used to take care of the quality of life in these neighborhoods, by taking care of the public space and the services provided by the government to the inhabitants. These housing projects comprised five-story buildings, provided with government services and facilities, including public gardens taken care of by government officials which were also arenas for sports.

After Nasser, Anwar Sadat came with an economic liberalization agenda. He, and then Hosni Mubarak with his neoliberal agenda, relieved the government of its social responsibilities. The Egyptian state gave up the welfare model and stopped providing quality services to the population. This gave rise to the private sector, and to informal ways of life outside the boundaries of government planning. Sixty percent of Cairo’s inhabitants occupy informal housing built on former agricultural land without government permit. This phenomenon is a result of the dramatic increase in government delegation of housing to the private sector starting in the mid 1970s. The private sector operation created such inflation in real-estate prices which made formal housing inaccessible to low-income citizens. Hence, the poor’s solution was to resort to informal housing.

Islamists and the Threat of Informal Sectors

The popular quarters therefore morphed to become the sites of informal housing. Government services and facilities were either nonexistent or inadequate. Many social assistance roles were delegated either to the creativity of the people or to charity organizations, which were mostly Islamic organizations like the Muslim Brotherhood and al-Gamiyya al-Shariyya. These groups’ charitable efforts paved the way for Islamic activism in those quarters.

Utilizing the social capital they acquired by providing services for the people, the Islamists exploited the absence of government in the popular quarters, and thought of them as a safe haven. One potent example of this pattern is when a group of militants declared the popular quarter Imbaba the “Islamic Republic of Imbaba” in 1992. This premature group was crushed in a few months, by December 1992, after the government deployed about 18,000 heavily armed police troops to occupy Imbaba.

After that, the government started to perceive the popular quarters as a threat to the country’s stability and security. It began intensifying the police presence in those neighborhoods. However, the informality of these neighborhoods was beyond the government’s capacity to formally police the space. So it shifted the focus to orchestrate a hybrid network of government combining formal and informal governing techniques.

As a neighborhood emerging from the encroachment of the capital on the rural areas, the clan power structure is highly present in Matariya. Most clans emerged as powerful through working in illegal construction, antiquities, and drug dealing. They made use of the government’s absence of the government to expand dependence on illegal activities. Yet, the same illegal activities were also the local police station’s entry point into this traditional power structure. The deal between the local police station and the powerful clans in the neighborhood was exposed after January 2011.The deal was that the local police station would facilitate illegal activities for a commission to the police personnel. But most importantly; for the big clans to perform the role of the police in the neighborhood:  disciplining the public space. Hence, both the police officers and the big clans formed a mesh of power to govern the public space of the neighborhood. Since the basis for this mesh of power was informality, the exercise of violence essential to governing was not bound by legal rationality. Rather, it was exercised by the police officers and the big clans in the public space on a daily basis, which made violence the main theme governing state-society relations in Matariya and popular quarters at large.

This mesh of power was inherently contradictory. It sought to police the informality by investing in it, thus intensifying the informality which was constantly challenging the government operative mode, which rests upon rationalization. For decades, informality has been maneuvering this hybrid mesh of power. These maneuvers were accumulating and waiting for the right moment, which struck in January 2011 when state institutions were suspended. Mass unplanned protests erupted in the neighborhood, and flowed spontaneously to the main square of Matariya. A couple of hours of clashes with the police were enough trigger for the people to channel their anger towards torching the police station. On January 28, 2011, Matariya, ignored by the political activists, was the neighborhood that suffered the most killings by the police in Cairo. The fights with the police forces in almost all popular quarters severely exhausted the security forces of the city, who were not able then to crush the sit-in of Tahrir Square; making it possible. This is how we perceive the moments of January 25 and January 28 as complementary moments.

As a final word, I would like to say that exposing the dynamics of the local police station, in Matariya and other popular quarters in Cairo, may be thought of as instances of liminality as explained by Victor Turner, when the power structure was temporarily suspended before fully recovering back. However, those days cannot be limited to their temporality. They posed a serious challenge to the logic of government, beyond their happenings, and exposed its inherent contradictions. For example, the local police station of Matariya was able to return to its original place just five years after January, 2011. People still whisper whenever they pass by the police station, reminding themselves of the moment when they were victorious over this building and keeping the memory even in whispers. The contradictions of the neoliberal governmentality in the popular quarters cannot be fully restored back. It will always be challenged at different scales on a daily basis.

[1]“Popular quarters” is used to refer to working-class neighborhoods, often outside the major city centers.