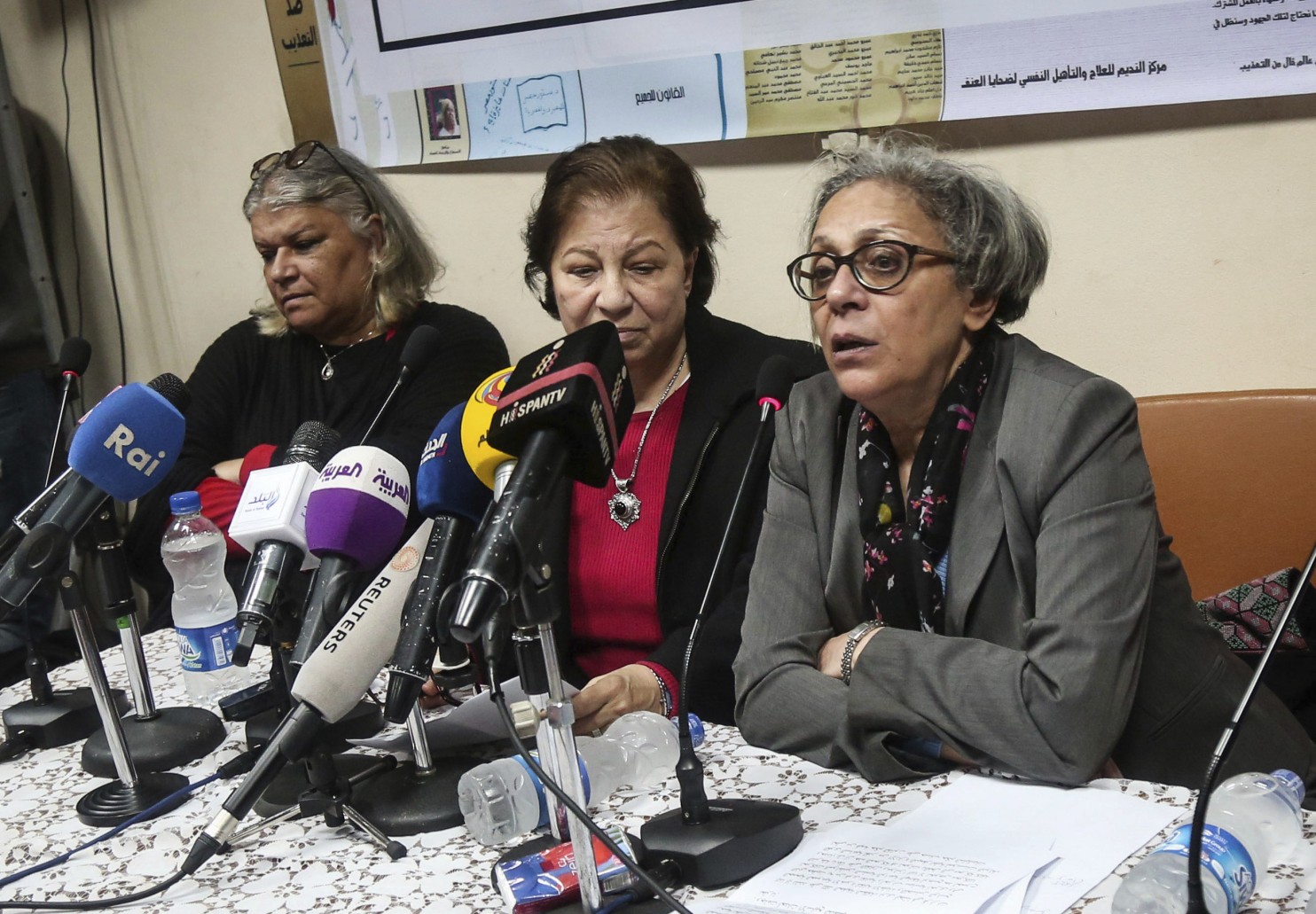 At 11 a.m. on the morning of February 9, 2017, two doctors from the Free Treatment Department of the Ministry of Health, accompanied by about 50 policemen, headed toward the El Nadeem Center for the Rehabilitation of the Victims of Torture. Once there, they proceeded to seal the doors to the rooms belonging to the center.  The center’s employees, were not present, as Thursday is not a working day for the organization. On their way back, the police force arrested the building doorman and questioned him at the police station before allowing him to leave. It appears that the police had investigated the center’s opening hours in order to shut it down in the doctors’ absence, something they had failed to accomplish twice last year, in February and in April.

Egypt’s ruling regime seems unable to tolerate any opposition or criticism of its policies, especially when it comes to human rights violations generally, and particularly violations by the security services. Over the past two years, human rights violations by the police have reached new heights, from torturing victims to death to extralegal killings to intentional negligence of healthcare in jails and finally to an outbreak of forced disappearances to a degree never seen in Egypt’s modern history. Under the guise of the war on terrorism, scores of citizens have been killed. Most of these killings have occurred in Sinai, which has become isolated from the rest of the country; so much so that the only sources of news and information from the peninsula are the Ministry of Interior and the Armed Forces.

In light of the declining human rights situation in Egypt, the state has bared its teeth against civil society in general and rights organizations in particular. Over the past two years, tens of people have been banned from travel without legal notification, with the constant possibility of a surprise denial of passage through passport control. In addition, the funds of a number of rights organizations have been frozen, as well as the personal funds of their principals. What happened at the El Nadeem Center this week is but one link in a long chain strangling rights organizations and silencing any voice that refuses to cheer the ruling regime day and night.

In spite of the increasing limitations on human rights activists, as well as their constant defamation by state media, and in spite of our constant expectations of renewed attacks against the El Nadeem Center, this particular attack came as a surprise, especially after the publishing of the 2016 violations report. The attack was particularly surprising, first, because it occurred on a weekend; and second, it was surprising because there is currently a pending lawsuit filed by the El Nadeem Center against the Ministry of Health with the State Lawsuits Authority, during which the Ministry of Health has failed to present any documents against the treatment and rehabilitation center, although it has been touting such evidence in the media constantly.

A more logical scenario would have dictated waiting until the Administrative Court had ruled on Case 173, publicly known as the foreign funding case. Another scenario would have been to file a lawsuit against all human rights organizations, including the El Nadeem Center. A final expected scenario was a suffocation of the center by freezing its bank accounts, stopping its ability to provide therapy to the survivors of violence. Such an attempt to freeze the center’s finances occurred in 2016 and was abandoned later in the year, and was expected again since another human rights organization had had its accounts frozen.

The actions taken, however, were even worse than we had expected, with a large police force showing up—while we were not there—to shut down the center without carrying out an inventory and taking a record of its contents. Even worse, the 2016 decision by the Free Treatment Authority to shut down the center’s medical clinic was exceeded, leading to two additional apartments belonging to the center being sealed as well.

So far, none of El Nadeem’s doctors or founders have been arrested. It is worth noting that Dr. Aida Seif al-Dawla was banned from travel indefinitely last year while on her way to Tunisia to attend a workshop for centers that work on the rehabilitation of the victims of torture. Other than that, the center’s three founders—Dr. Seif al-Dawla, Dr. Suzanne Fayyad, and I—are all awaiting the results of Case 173; our names are included in the leaked version, although none of us has been subpoenaed for investigations to date.

The state is mistaken to think that shutting down the El Nadeem Center will stop its support of the victims of torture or the publishing of their cases. The center is not just a medical clinic or a collection of desks and equipment: It is the only center that has provided psychological treatment and rehabilitation for the victims of torture for 24 continuous years. The center has also contributed to the creation of similar organizations in a number of countries across the region and is a founding member of the Network for Rehabilitation of Victims of Violence and Torture in the Middle East and North Africa, a member of the International Society of Psychiatry, a founding member of the Salma Network Feminist Organization against Violence in the Arab World, and the Regional Alliance for the Defenders of Human Rights in the Middle East and North Africa.

The El Nadeem Center and its founders have received numerous international awards, including the Reebok Human Rights Awards, the Human Rights Watch Award, the Karama Organization Award, the Amnesty International Award, and the Barbara Chester Award. The Center also came in second place for the Tulip Award; one of its founders, Dr. Seif al-Dawla, was nominated for the position of President of the United Nations Human Rights Council, and I am a member of the Advisory Committee of the Regional Office of the United Nations Women.

With all of the above in mind, the El Nadeem Center is considered a pioneering scientific, vocational, and rights school in the field of the treatment and rehabilitation of the victims of violence and torture. With its 24-year history, the story of the El Nadeem Center will not end with such a juvenile move. Its doctors will continue to provide rehabilitation services even if it means treating the victims at home. The work team will continue to track violations by the police and security organizations against civilians, all while following the legal route. In fact, we expect the number of volunteers looking to defend the victims of torture to increase significantly.

There are concerns about the effects of the closure of the El Nadeem Center on smaller or newer human rights organizations, as well as on the young men and women who work in civil society. The center’s high esteem may discourage some, leading them to think that resistance is futile under the shadow of this dictatorial regime. We must remember, however, that these transgressions by the regime make others even more resilient and determined to fight the regime’s human rights violations and adhere even more closely to the demands of the January 25 Revolution of freedom, dignity, and social justice. History has taught us that tyrants dig their own graves when they go against their people.

What is truly unfortunate is how bad the situation in Egypt has gotten after the great revolution the Egyptian people undertook. It is no secret that even though military rulers, by virtue of their occupation, are as far removed from democracy as possible, some military regimes try to improve their social and economic performance while others succumb to restricting freedoms and other still use one faction of their country against the other. What we are seeing in Egypt, however, is a regime that has made enemies out of everyone, arresting journalists, removing media personnel, breaking into syndicates, shutting down human rights organizations, and violating its citizens’ freedoms, all while increasing poverty, and growing the national debt to unprecedented levels. All these things combine to point to an absolute lack of strategy and political intelligence, and to a level of pride that can only lead to destruction. There is no indication that such a regime takes any time to recalculate its steps or determine how best to position itself to absorb the local and international reactions. The regime has drawn its sword and is lashing out at a very stormy sea.