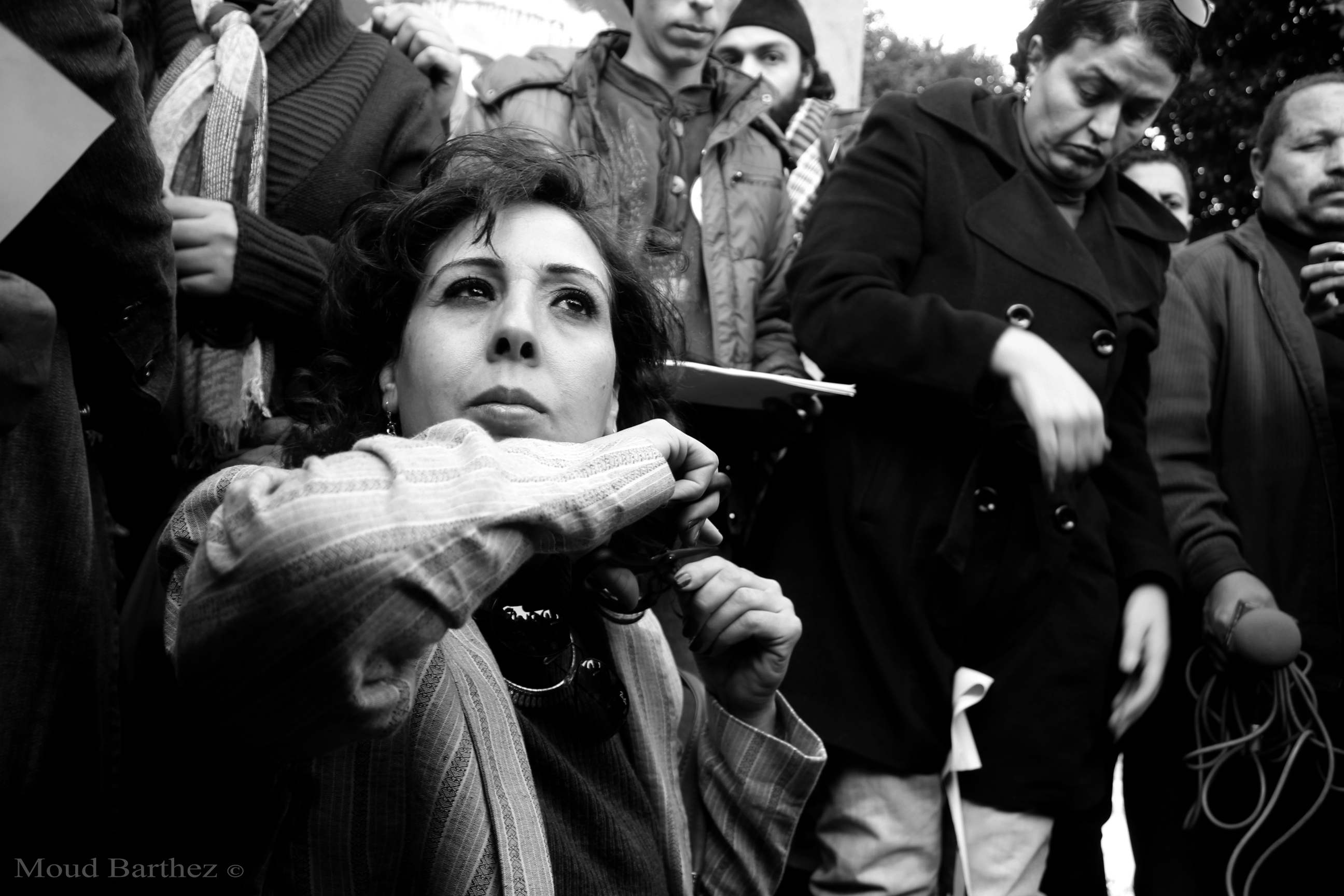 Woman cuts her hair in a protest against the persecution against women - Tahrir Square - Flickr: Moud Barthez

Cassandra, the legendary princess of Troy whose name meant “she who entangles men,” was a beautiful woman. So beautiful was she, in fact, that the Greek god Apollo wanted her for himself. In order to seduce her, he granted her the gift of prophecy, and she became known as the woman who had incredible insight into the future. However, Cassandra spurned Apollo’s advances and vowed to lead a chaste life. This decision did not sit well with Apollo, and he chose to give her the curse of never having her prophecies be believed. In Greek mythology, she is for this reason known as the insane beauty, and to this day, her name is associated with brilliant insight obscured by insanity.

This legend resonates strongly with observers of the condition of women in the Middle East, where the phrase “beware of the women, for they are beguiling” is uttered whenever a woman’s presence, ideas or behavior is perceived as threatening to induce “insanity.” This “threat” necessitates politicizing women—their bodies, their movement, their space.

In Egypt and elsewhere, the appearance and presence of women in general is effectively (and collectively) controlled by men. What a woman wears is not her decision; her dress code is established by the men of her society, often explicitly, and any attempt to challenge this code is often met by violence, thus affirming that there is nothing that she alone can do to break the unwritten laws of the culture in which she lives.

In a country like Egypt, though, it is sometimes true that appearing to stand up for women’s rights against a tyrannical regime can be a beneficial act, particularly when the feminist-oriented demands are in alignment with (or at least not opposed to) the male-centered status quo. In these cases, the condition of women in society can be exploited by groups that have no real interest in promoting the rights and freedoms of women. In many cases, women are then led to believe that their battles are being fought for them and that calls for their rights have been truly integrated into the core demands of others. In turn, this obscures their awareness of being victimized yet again.

Oppression can be defined as the absence of choice. Every day, choices are taken away from women under the justification that they need “protection.”

Co-opting the feminist cause started when certain “liberals” took photos of themselves holding up signs indicating support for “The Uprising of Arab Women” after women were shamelessly harassed and assaulted during a march held on International Women’s Day in 2011 (the first after Mubarak’s ouster). At the time, the Supreme Council of the Armed Forces was in charge, and the narrow alleyway occupied by anyone opposing the military’s rule was filled with those who took up advocating for minority and women’s rights as their new initiatives. Now, in summoning support for their cause, the Muslim Brotherhood has recently launched a top-of-the-line website called Stand for Egyptian Women: Save Cleopatra (a pagan reference according to their taste, but appropriate for the intended audience). Egyptian women have thus found themselves yet again the object of propaganda that neither challenges the status quo nor addresses the problematic issues that women face daily. Rather, it portrays them as victims of the select elite that currently holds power in order to harness support for the ever-changing face of the “opposition.”

Time and again, women are both the scapegoat and the ally; the pawned and the pawnbroker. Ultimately, they are hostage to a system that perennially relishes abusing them. The same liberals and leftists who claimed to support women’s rights neither loudly condemn the almost-nonexistent quota for women in the new parliament nor challenge the constant attacks on women in the media. The same Muslim Brotherhood that now specifically counts female detainees and deaths since July 3, 2013, also fought to legalize FGM as soon as they came to power in 2012. They similarly defended the military after the emergence of the virginity tests scandal, and they pilloried the girl who became known as both “the blue-bra-girl” and “sitt el-banat” (the queen of the girls) after the photograph of her assault at the hands of the military police went viral. It is almost humorous to watch Muslim Brotherhood supporters now co-opting her image to garner support against the military considering the vicious attacks they launched against her then, including claiming that she was a spy sent to tarnish the image of the military.

In this political chessboard, women—particularly women of the working and middle classes—are merely pawns in a very sick game between two tyrannical entities. However, this is not to say that there are no women who participate in the politics of domination and derive direct benefit from furthering the current, patriarchal hierarchy of power. In fact, the role of these women is far more damaging than that played by the men in power. As they pander to the idea that they are the weaker sex, such women promote two beliefs: that a person (read: a man) in authority is necessary to secure their interests and that this person has the right to use force to maintain this authority. Such individual or small-group opportunism masquerading as—dare I call it—feminism undermines the appeal of a truly collective struggle for women’s rights, one that is not a struggle for the benefit of a few women or one political group or class but rather a struggle for the benefit of all women and by extension, all of society.

So far, however, the political powers-that-be, taking advantage of the political naiveté that has characterized the actions of women in male-dominated cultural bounds, have purely sought to grow the existing social and political structures, never going so far as to challenge the pillars of the existing regime. This renders the common demand of “down with the regime” a hollow, baseless mantra. The system that churns with sexism, racism, bigotry, classism, and elitism has remained—and without action, will remain—intact to protect and maintain the authority and dominion of any ruling party.

This context illuminates what happened on the premises of one of the most prestigious public universities in the Middle East on March 19, when a female student was attacked by a mob of male students who, judging her by her dress and style, decided that she was “fair meat.” This event may have provoked disgust, but it was certainly not a surprise. Sexual violence against women is a daily occurrence to which Egyptian society as a whole has become desensitized. When the President of the University of Cairo, Dr. Gaber Gad Nasser, openly blamed the student for dressing “inappropriately” and challenging the implicit dress code of the university, he was merely echoing the hegemonic thought pattern. Though he later retracted his words, claiming that they were “misunderstood” and denying that the woman would be punished over the incident, it was clear that the social media backlash had caught him by surprise. It was too late, however, to contain the situation. National media had already started discussing the incident, and TV presenter Tamer Ameen made an international spectacle of himself when he declared that the student was dressed like a prostitute. Even when Ameen apologized for his wording the next day, he justified his reaction by claiming that it emerged out of his sense of duty towards women, who are “our dignity” and “our honor.”

For a working- or middle-class woman to defy the standards associated with the public space by simply challenging a dress code shakes the very foundation of the ruling regime. The sexual assault she received was a deliberate act to maintain a sphere where systematic acts of oppression are left unchallenged and unquestioned. Such an incident would have been unheard of in the closed environment of the American University in Cairo, for instance, not because male students there are less frustrated sexually but because the politics of domination are applied and practiced in the open, public spheres.

It is worth remembering that gender equality is at the heart of social justice, one of the main demands of the revolution. To achieve gender equality, the politics of domination in all respects must be abolished before true reform can take place. The public space, where those who went out on the streets calling for the downfall of the regime congregated, needs to be revolutionized by embedding the ideals of mutual respect, cooperation, and social responsibility among men and women first and foremost, regardless of other characteristics. A space for women needs to be created where they can make choices that do not result in their vilification for any reason, regardless of their personal characteristics.

Oppression can be defined as the absence of choice. Every day, choices are taken away from women under the justification that they need “protection.” Yet the irony of using systemic tolerance of assaulting women sexually, emotionally, and mentally to rationalize such “protection” is not recognized. There is no longer a space where an Egyptian woman or girl feels safe, whether at home, on the street, at school, or at university. Embedded acts of aggression aim to relegate women to the dark corners of life where they will be used again and again as objects in others’ struggles.

Cassandra’s story does not end well. As Troy fell, Cassandra clung tightly to the sacred statue of the goddess Athena before Ajax the Lesser tore her away and raped her. Her being a supplicant of Athena hiding in the sanctuary of a god did not save her. Neither did the gods avenge her.

Women in many places admirably display an extraordinary level of courage in the face of systems that vilify their every move and try to justify their oppression, and this is particularly so for women in Egypt over the past three years. However, no one has the right to demand that women be so courageous simply in order to live their lives, and those who do demand it, whether as a nation or as individuals, are depraved.