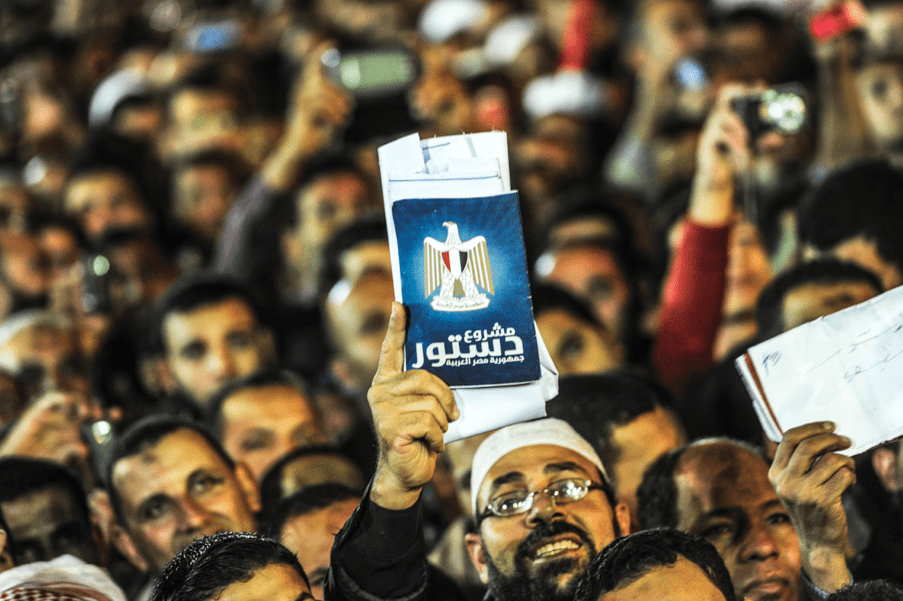 The new Egyptian Constitution is not a particularly bright beacon of democracy.

The voluminous document, comprising 247 articles, was recently approved by 98.1% of voters in a popular referendum that witnessed a 38.6% turnout. Although the Constitution specifies an expansive laundry list of theoretical individual rights, recognizes the binding nature of international law, and simplifies the legislature by eliminating the consultative Shura Council, it falls short of the mark in a number of significant areas. Briefly, the text adheres to a broken constitutional framework; limits religious recognition by the State to the three major Abrahamic faiths; distinguishes between men and women unequally; deprives citizens of a transparent judicial system by permitting the military trials of civilians; and grants an excessive amount power to Egypt’s state institutions, notably the Armed Forces and the judiciary.

While international hype has focused mostly on the content of the document, seasoned activists and politicians know that what has mattered more than constitutional language in determining the course of the country’s day-to-day affairs has been both the implementing legislation and the jurisdiction of state institutions. For these actors, the constitutional fight is far from over; rather, it is just beginning.

Describing the history of Egypt’s constitutions, Nathan Brown and Roni Amit explain that “the texts have “enable[d] more than [they] [limited and defined] the authority of the state and the government.” In light of such a history, it is not surprising that Egypt’s latest constitution, which was drafted within previous historical frameworks, exudes the same vague qualities. The text is littered with phrases like “determined by law,” “specified by law,” and “organized by law.” Such wording, while potentially expansive regarding rights and liberties, indicates that the constitution will not itself determine the trajectory of Egypt’s transition. Instead, the laws that are passed to implement the constitution will be a defining factor.

For example, the state is committed per Article 11 to achieving equality between men and women “in accordance with the provisions of this constitution.” In a constitution that enshrines everything from international legal standards to shari’a, there is no indication of which “provisions of this constitution” will apply. Thus, while it is conceivable that Egypt swears in its first female president under this constitution, it is equally possible that a new presidency law, based on conservative constitutional “provisions,” be adopted and wholly bar women from the office. Similarly, Article 80 states that no child shall be detained or held criminally responsible “except in accordance with the law.” Thus, while a strict children’s law could be passed to ensure that no child is detained by the government under any circumstance, it is also equally possible for the state to create legal exceptions in which children continue to become prisoners of state detention facilities in times of terrorism and states of emergency.

Women’s and children’s rights are not the only provisions subject to the Constitution’s vague language. Comparably expansive and open-ended phrases are found in many articles, including but not limited to those detailing: the processes for electing legislators and the president; the selection of governors; the establishment of representative quotas within Parliament; the topic of transitional justice; and the exceptions to the ban on forced labor. With a constitutional structure like this, it will be the laws passed to implement the constitution that will matter much more than the constitution itself.

In addition to implementing legislation, the actors who carry out such laws will also have a significant impact on Egypt under the new constitution. For example, the constitution theoretically enhances habeas corpus protections and unequivocally bars torture. However coupled with a culture of impunity and the widespread absence of the rule of law that has long colored Egypt, the police and security forces tasked with implementing these laws, the justices who determine the constitutionality of these laws, and the Ministry of the Interior who governs its internal affairs are the institutional actors who will ultimately determine whether or not the rights of detained Egyptians are respected, irrespective of the constitutional text.

The immense influence of institutional actors becomes blatantly clear when looking at the country’s most recent protest law, which was passed before the constitutional referendum. To begin with, the law fails to meet international legal standards and is arguably at odds with a number of constitutional provisions, including the right to dignity, the rights regarding state detention, and the right to be free from torture. The country most recently saw the exaggerated implementation of the protest law with the November 26 dispersal of the Shura Council protests. In addition to the Central Security Forces’ use of force beyond that mandated by the law itself, reports of police abuse, torture, and illegal investigations have all surfaced. Even in the face of a number of potential constitutional violations at stake, the actors in power, whether they be the Ministry of the Interior which is in need of long-overdue reform or the justices who are conservative in determining issues of security, are unlikely to pursue justice that addresses the reality of the circumstance.

Despite this, all is not lost. As political scientists Michael Albertus and Victor Menaldo point out, a number of modern democracies that exist today have had constitutions that arose from less than ideal circumstances. Research indicates that a total of 71% of new democracies, including South Africa, Indonesia, and Turkey, “inherited a constitution that was designed under dictatorship and where outgoing elites dominated the transition process.” Savvy political negotiations and long-term approaches to handling strong militaries, however, may produce a scenario in which Egypt slowly democratizes despite its less-than-ideal constitution and the illiberal institutions and actors which remain. Albertus and Menaldo underscore the 31% of the countries that democratized under autocratic constitutions, ultimately to replace their foundational documents with new and improved constitutions.

Ultimately, while the constitution as it stands may disappoint idealistic democrats, the future of Egypt’s trajectory is far from set in stone. Recent history indicates that what will matter more for the country’s future will be the laws that are passed to implement the constitution and the actors who rise to claim power under its auspices. While the current scene does not necessarily look promising, much remains undetermined and the fight for each of Egypt’s interested actors is only beginning. There remains hope that politicians and activists will lead campaigns to call for the reform of institutions, that activist judges willing to challenge archaic laws will come to the bench, and that the Egyptian people will continue to push the envelope and slowly challenge the status quo in the fight for a more democratic Egypt.