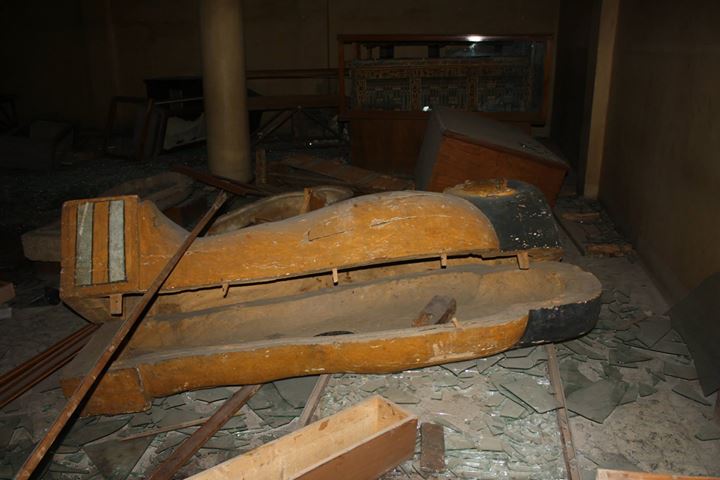 Elizabeth Wickett, a lecturer on Upper Egyptian folk styles and performances who has lived in Egypt for over 15 years, recalls Amm Rizq Būlos’ name elegiacally. She has roamed Upper Egypt extensively, following the trail of its rich oral narrative tradition, which can be traced back to tales of Canaanite gods and goddesses and life in ancient Egypt. Amm Rizq, a weaver from the primarily Coptic town of Nagada, was renowned within his community for his ability to recite the stories and religious legends of the Saints. When Wickett returned to Nagada after the January 25, 2011 uprising, she learned that Amm Rizq was among the many who had disappeared during that turbulent time. Gone with him are his melodic renditions of historical ballads, part of the vanishing tradition of folkloric arts in Egypt. Wickett captured Amm Rizq’s renditions of two Coptic tales—Qissit Marī Jirjis and Qissit Ãdam wa Hawa—in her book Seers, Saints and Sinners: The Oral Tradition of Upper Egypt. Sadly, the family of the self-styled hagiographer fear that he was killed in a sectarian conflict. 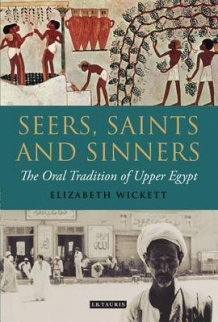 Fortunately, Wickett had been there to record and immortalize Amm Rizq’s ballads, which were unique to him. However, there are others like Amm Rizq who are little known or valued in their role as history keepers. They peddle through life in rural Egypt, trying to protect their art from creeping urbanization. Their verbal stylings, rich in paronomasia and erotic similes, hearken back to well-known expressions from the Song of Solomon and ancient Egyptian love poetry. One may be surprised to learn that, given the conservatism of Upper Egypt, such allusions still feature strongly in Upper Egyptian weddings and hen night ditties.

To many, the loss of stories and the lives of the storytellers are incomparable to the loss of ancient Egyptian artifacts, a problem that has particularly increased following the January 2011 uprising. The human chain that aimed to protect the Egyptian Museum during the eighteen days of the uprising is still hailed as one of the greatest examples of national pride and patriotism; however, it is also a symbol of how Egyptian treasures have diminished in value in the eyes of some of the Pharaohs’ progeny.

In August 2013, the Malawi National Museum in Minya was ransacked and looted during the unrest that followed the government’s dispersal of the Muslim Brotherhood’s Raba’a and Nahda sit-ins. The losses were extensive, and even the artifacts that were left behind were damaged. As a result of a bomb explosion outside the Cairo Security Directorate building this year, the Museum of Islamic Art was badly damaged, destroying artifacts and the work of an eight-year, multi-million dollar renovation project.

A glance at the port city of Alexandria reveals the extent of the devastation its historic buildings and antiquities have suffered, all while the government has conveniently ignored—and even sometimes blessed—the destruction. Last week, the noted Gustave Aghion villa, designed by renowned Belgium-born French architect Auguste Perret in 1927, witnessed a last-minute, partial rescue when locals raised the alarm surrounding its impending demolition. The standoff between activists for “Save Alex” (an initiative run by Alexandrian volunteers) and the bulldozers brought attention to the disaster, though it was a little too late. Despite the demolition being halted by the governor of Alexandria, former Major General Tareq al-Mahdy, more than 50% of the villa had already been destroyed. The legal battle over the villa continues between the municipality and the property owners, who claim that the villa is in a state of disrepair and that no one, whether from the Egyptian government or UNESCO, has offered to invest in restoring it. Few could blame the villa owners for wanting to get rid of it, as the villa stands bereft with no plans to utilize its potential for investment while the general real estate market continues to boom around it.

Villa Ambron, the former home of Nobel Prize nominee Lawrence Durrell, whose renowned tetralogy The Alexandria Quartet was inspired by his time in Alexandria, stands nervously awaiting a sealed fate. The villa, which stands in the middle class district of Maharram Bey, faces imminent destruction if the Ministry of Antiquities fails to act. This district has witnessed a boom in its real estate market in the last two decades, and particularly tall buildings (often illegal and even unfinished) are being installed, adding ever-more eyesores to the landscape.

Sherif Farag, a cofounder of the “Save Alex” initiative, is currently detained in prison, having been charged with allegations of “disturbing the peace,” “robbing a bank,” and “murdering protestors,” among other ludicrous accusations. His project was born out of a passion for Alexandria’s rich architectural heritage, which stands as the only witness to Alexandria’s cosmopolitan past. The owners and architects fled during the nationalistic wave of Gamal Abdel Nasser’s era. Driven by despair over the gradual destruction of the once-poetic anatomy of the city, Farag and others have been organizing protests and awareness campaigns to defend the Alexandria that was once a pharos to the world. Looking around Alexandria, the need for initiatives like ‘Save Alex’ is an evident necessity. The second largest city in Egypt is becoming more and more like the Cairo jungle: haphazard concrete blocks are being erected that are not only in disharmony with the aesthetics of the city, but are also often towering many floors above the levels authorized by their legal permits (if, in fact, permits were even obtained). Alexandria has borne witness to more building collapses than any other city in Egypt in the last few years, yet no one has been held accountable for the crimes that have led to these disasters. Even the deaths of the occupants have been passed over as collateral damage in the city’s rush for development.

Today, Alexandria stands a ghost city; its beauty haggard, its history being erased in favor of money-reaping high rises and shopping malls. Soon, the world will only be able to appreciate Alexandria’s belle époque as captured in novels set in Alexandria, and of those, there are not many.

For a country that lays claim to one-third of the world’s historic monuments, Egyptians are rather blasé about what happens to them. Outcries are heard when Egyptians learn that a museum in Country X has “acquired” an Egyptian artifact, but the same people would have done nothing when the artifact was seen being sold on EBay a few months earlier. The sentiment that “it’s a revolution and we want to make some money” has been expressed too often on Egyptian streets, and increasingly so since the January 2011 uprising. Perhaps having Egyptian heritage locked up in museums abroad is a blessing in disguise at this stage.

Certainly, it is difficult to make people care about threats to their collective heritage when many are struggling to put food on the table, mourning lost and killed loved ones, or fighting to free unjustly detained family and friends. It is indeed the best time for “culture vultures” to make a juicy profit. Moreover, it is too much to expect the government to help when it is simultaneously keeping so busy arresting and defaming activists such as Sherif Farag, whose activism and service to his country are unblemished.

There will be generations who will not recall a better Alexandria or Cairo or Mansoura than the ones they have grown up seeing. There will be generations who will never learn the stories of the places that have shaped human civilization more than any others in the world. These generations will not hesitate to destroy their collective past for the sake of a lucrative check. In fact, these generations are already here. Competence in caring for the past cannot be assumed of the Egyptian government, and this is especially so for the Ministry of Antiquities, which already has a disturbing history drenched in corruption. What has been happening for the past three years is empirical proof that the government is bankrupt of wisdom, lacking in forward thinking, and utterly without a clear plan to secure, protect and invest in Egyptian heritage.

When discussing the loss of Egypt’s heritage, objectivity is unaffordable. Anger should prevail, and lawful action should follow in tow. With the new discoveries archeologists are making even today in Egypt, every endeavor must be made to protect and enrich priceless Egyptian heritage—both physical and nonphysical—on the Egyptian soil where it has resided for decades, centuries, and millennia. It would be beyond shameful if history records that the creators of this unique civilization were the ones who squandered it. It is indeed fortunate that the pyramids are immovable, for now.