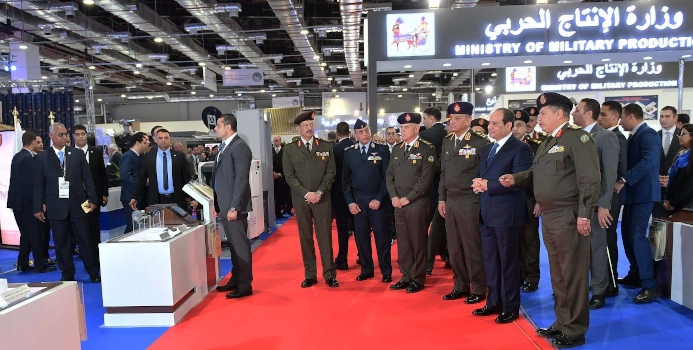 In late 2018 on the outskirts of Cairo, Egypt hosted its very first tri-service arms fair. The Egypt Defence Expo (EDEX), which began December 3, brought arms companies from around the world under one roof in an attempt to capitalize on a booming weapons market.

EDEX was a rare opportunity for the country to showcase its military industry on the international stage. Egypt’s recent grandiose arms procurements from multiple sources, combined with aspirations of indigenous, self-sufficient arms industries, are efforts toward securing strategic and sustainable arms supplies but are likely destined to fall well short of government expectations.

Months after Abdel-Fattah El Sisi was sworn into office as president, defense spending skyrocketed; according to statistics from the Stockholm International Peace Research Institute, Egypt’s arms imports grew 215 percent over the five year period from 2013 to 2017. Formerly reliant on U.S. Foreign Military Financing (aid provided to rebuild the Egyptian military after the peace treaty with Israel), Egypt recently became the third largest importer of arms behind India and Saudi Arabia, penning billions of dollars’ worth of high-profile deals with European nations and Russia, despite potential political and technical challenges.

The shift in policy was partly a reaction to a U.S. hold on military aid after the 2013 coup and massacre of protesters at Raba’a al-Adawiya Square, as the Egyptian state realized that depending on the goodwill of American policymakers may have its drawbacks (particularly amid growing concerns over Egypt’s domestic political and human rights climate) and served as a signal to Washington that viable alternatives were lining up to do business. But what seemed as a stark change after 2013 really marked the fulfillment of longer-held desires. Egypt was beginning to look for other sources of armament than the United States as early as 2005 when it purchased air defense systems and helicopters from Russia. The U.S. had placed restrictions on current-generation weapons systems such as air-to-air missiles, air superiority fighters, helicopter gunship radars, and tank modifications due to concerns around the military balance in the Middle East.

Repeated Egyptian requests over the span of two decades to lift restrictions were met with continual resistance in Washington. The insistence that Israel maintain a qualitative and quantitative military edge in the region has remained the largest obstacle for sale approvals, though Egypt’s human rights record and information security issues remain points of contention.

Thus the more undependable American position (particularly in Congress) has expedited the transition to diversified supply, although it was not the root cause. Whereas extravagant arms deals have been making headlines, renewed Egyptian efforts to modernize its military production industry have garnered less attention, due to the relatively opaque nature of the subject and a lack of access to arms factories.

At the forefront of these efforts are national companies that fall under the umbrella of the Ministry of Military Production and the Armed Forces’ National Service Products Organisation (NSPO). Though they have a great deal of overlap, the former largely supervises the country’s national arms factories while the NSPO manages the military’s civilian economic interests. The exact scope of these agencies remains obscure, as their activities have been kept from the public under the guise of national security concerns. However, they are prominent partners in ambitious infrastructure and construction projects integral to Sisi’s visions for national development and economic self-sufficiency.

Egypt’s military production companies had already made strides into civilian economic sectors under former president Hosni Mubarak, making everything from construction supplies to pasta. The moves were justified as necessary, but limited, measures to generate revenue for the Armed Forces without straining scarce government resources. Under Sisi, though, the military has been granted far more latitude to oversee ambitious government-driven infrastructure megaprojects and make major inroads into civilian services. The minister of state for military production, Major General Muhammad al-Assar, recently inaugurated the country’s first artificial glass factory, and the NSPO is a partner in Egypt’s New Administrative Capital and has even opened fish farms.

Al-Assar, a Sisi confidant who was appointed minister in 2015 after his tenure as head of Armed Forces procurement, has played a pivotal role in both bolstering the military’s grip on the economy and working toward self-sufficiency in modern arms production. He has been instrumental in forging new partnerships with foreign nations and nationalising modern production technologies.

Alongside Israel, Egypt has been one of only two countries in the region with significant arms production capability, though it has mainly relied on licensed assembly of Western products and the manufacture of Cold War-era weapons in Soviet-built factories. Today, most of these factories have either been transformed into maintenance, repair, and overhaul facilities, or repurposed to produce civilian products.

But Sisi has reiterated his desire for a modern and self-sufficient military industry that can successfully compete on the international arms market and provide new revenue streams that contribute to wider development goals. And EDEX was a perfect opportunity to relaunch the image of the national arms industry. However, longstanding institutional deficiencies belie any image of serious progress.

At the expo, Egypt’s national defense companies introduced new products such as armored vehicles, radars, and future soldier systems. The military was keen to show off its latest products, to showcase their industry’s capabilities, and boast to a domestic audience. But the majority of the systems on display were heavily reliant on imported technology and came with considerable export restrictions. Ultimately, the weapons featured were designed to meet the country’s low end needs rather than seriously compete on international arms markets.

Why then has Egypt, a country with a large military workforce, little civilian oversight over military projects, scarce resources, and a political will to modernize, failed to successfully develop its domestic production? For one, historic deficiencies continue to hobble any effort toward modernization: Poor management, workforce training issues, and dismal marketing have resulted in staggering amounts of inefficiency that has continually impeded attempts to launch self-sufficient industries. The Egyptian pavilion at EDEX, for example, showcased three separate, competing lines of armored vehicles, and some of the products were obsolete despite just being introduced.

The biggest challenge, however, is that attempts at building credible military production capabilities are predicated upon the unrealistic assessments of political leadership, rather than sober evaluations of feasibility and need. Previous plans under Gamal Abdel Nasser and Mubarak accomplished little. Despite these leaders’ bluster about their defense industry as a symbol of martial strength, they had little export success and failed to meet anything other than basic domestic needs. Today Sisi, without undertaking any real structural reform of the sector, follows in their footsteps.

Efforts to modernize production bases have mostly secured assembly lines that come with some material and design technology transfer but do little to build essential scientific capacity for self-sufficient industries, apparent repeats of initiatives spearheaded by Mubarak-era Defense Minister Abdel Halim Abu Ghazala, which introduced assembly lines for arms such as Abrams tanks and Gazelle helicopters but failed to launch any follow-up indigenous projects.

Egyptian defense industries, then, would be better served by focusing on eliminating longstanding workplace deficiencies that waste scarce resources and hinder understanding of current domestic and international market needs. Long-term strategy should be predicated on the nationalization of sub-component and legacy weapon systems modification technology, meeting low-end internal demands and attracting buyers from export markets with similar requirements across Africa, Asia, and Latin America. Ultimately, they should aim for consistent but modest arms sales that can contribute to new progressive and wide-ranging indigenous arms-production programs.