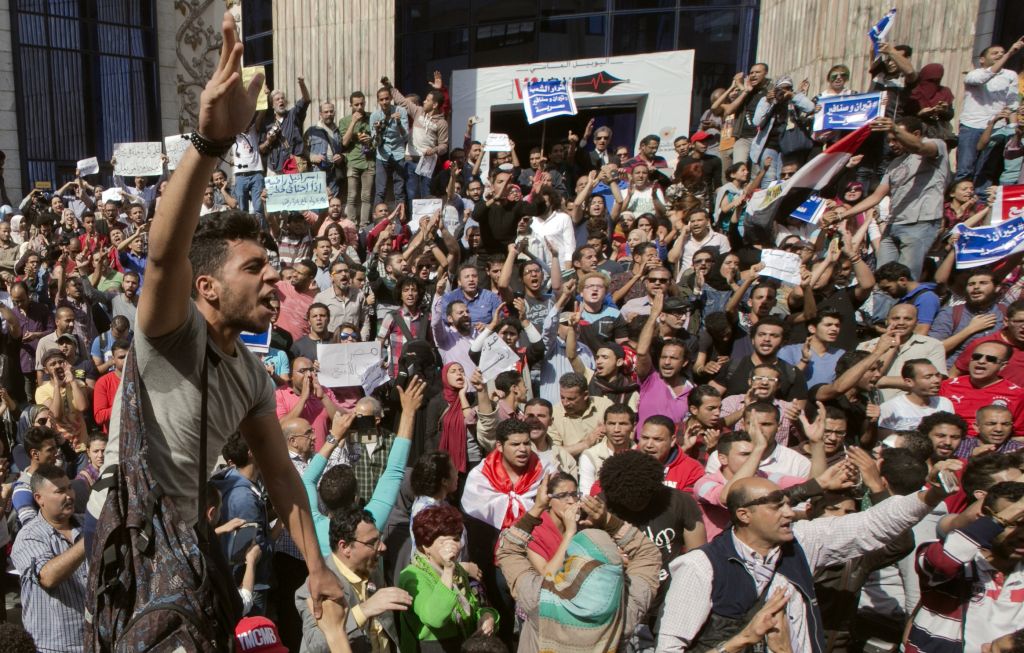 Egyptians shout slogans against Egyptian President Abdel-Fattah el-Sissi during a protest against the decision to hand over control of two strategic Red Sea islands to Saudi Arabia in front of the Press Syndicate, in Cairo, Egypt, Friday, April 15, 2016. (AP Photo/Amr Nabil)

In Egyptian politics, the stances of political movements and parties on human rights and citizenship vary according to their relationship with the incumbent regime. A quick review of the positions of the prominent political parties on the plight facing human rights organizations over the last five years helps to clarify the contradictions of their stances on a key freedom: the freedom of assembly.

Shortly after the January 2011 uprising broke out, the regime launched a crackdown on independent human rights non-governmental organizations, as groups routinely criticized human rights violations of by the Supreme Council of the Armed Forces (SCAF) during its 16 months ruling Egypt. The military and other remnants of the regime looked at human rights advocacy organizations as one of the key factors behind the January uprising, and aimed to crush these groups to prevent another uprising.

Late in 2011, the state and its security apparatus declared war on human rights civil society organizations by attacking the offices of 17 American, European, and Egyptian organizations. At the time, the uprising was still alive with a buzzing political life in Egypt and constant interactions of the political parties and SCAF. Some of the liberal and leftist parties that emerged after the revolution showed clear support for enhancing and defending human rights. Their position was best manifested during the assaults against and killings of protesters in the Maspero Massacre, Mohamed Mahmoud Street violence, and the Cabinet Clashes. However, with the crackdown on civil society, some parties moved and others turned a blind eye. Some liberal and Islamist parties chose instead to attack human rights groups.

After breaking into NGO offices, the Egyptian Social Democratic Party (ESDP) was quick to call for a protest supporting CSOs. The EDSP founder wrote a scathing editorial criticizing the SCAF crackdown on human rights groups. The Free Egyptians Party (FEP) did not take a clear position on the attack on human rights groups, contrary to its stance on the SCAF assaults against peaceful protesters. Some FEP parliamentarians only referred to the attack on NGOs and the prosecution of their staff as a political decision of the ruling regime. The Salafist Nour Party said, “If this is legal and constitutional, we welcome the measures.”

The Muslim Brotherhood and its political arm—the Freedom and Justice Party (FJP)—hailed the crackdown on organizations as rule of law measures. Prior to the attack, the Brotherhood was keen on officially decrying foreign funding of the civil society. It denounced the call of then-American Ambassador Anne Patterson to end civil society investigations. Furthermore, recent WikiLeaks relating to the emails of Hillary Clinton indicate that SCAF consulted with the Brotherhood before deciding to raid NGOs headquarters and prosecute the staff.

The Wafd Party joined in smearing human rights groups and described them as the Trojan horse of the West to manipulate the revolution. The party newspaper published ungrounded reports on human rights advocates receiving secret US funds. The newspaper adopted an editorial policy permitting anti-human rights propaganda. The party also blocked chairmen of NGOs that receive foreign funds from running for party leadership and dismissed a member for working in a U.S.-funded NGO.

Under the Brotherhood’s rule, the FJP proposed a bill that was deemed by the human rights groups as repressive of the civil society. The bill proposed restrictions largely exceeding those imposed by the Mubarak regime to stifle civil work. The bill came under fire by the UN Human Rights Commissioner at the time.

The National Salvation Front (NSF) was an umbrella group founded in November 2012 for Brotherhood opponents, comprising key civil opposition figures from political parties and movements. The EDSP, FEP, and Wafd were all members of the NSF. The NSF took a positive stance on freedom of association. On May 18, 2013, in a statement delivered by the head of the FEP, the NSF referred to the bill proposed by the FJP as “an attempt to silence and subjugate the society and any free voice against their policies.” The NSF considered the bill as reintroduction of the police state – placing human rights groups under the grip of the security apparatus. It is noteworthy, however, that the NSF did not comment on the criminal conviction by a Cairo court on June 4, 2013, sentencing 43 civil society workers to jail.

Political interests pushed some parties to change their positions on civil society organizations and freedom of association. For instance, the Wafd Party supported a position contrary to its beliefs and views on human rights groups by approving the NSF statement defending these groups. Wafd saw it as an opportunity to oppose the Brotherhood regime rather than as a genuine defense of the freedom of association and human rights advocates. It is also noteworthy that the Brotherhood and its party used to reject comments by Western governments on the situation of human rights and public freedoms during the rule of President Muhammad Morsi of the FJP. However, since its ouster, the Brotherhood and the FJP have been actively advocating for Western governments to interfere in the Egyptian affairs to achieve their goals and reinstate Morsi. The Brotherhood has always been suspicious towards human rights organizations advocating in the U.S. and in European capitals, but are themselves active in Europe and the United States, even competing with human rights groups at the U.N. Human Rights Council in Geneva.

After toppling Morsi, the political and party landscape in Egypt changed. The FJP was dissolved and the Muslim Brotherhood was banned, in a move welcomed by the NSF. The latter soon disappeared to be replaced by the military as the key actor in public affairs. Political parties were weakened and their role in ousting Morsi was marginalized. Media propaganda in state-owned and private media outlets focused on the role of the army and the then Defense Minister, Abdel-Fattah El Sisi, in materializing the will of the people in the June 30, 2013, uprising against Morsi. This was coupled with an excessive media campaign against human rights organizations, which proved to be an easy target. Political parties lost their stamina in defending those groups and freedom of association, contrary to their position under Morsi.

In 2014, the Egyptian government issued an ultimatum for civil society institutions and allowed them a grace period to align their operations with a law passed under Mubarak. Human rights groups have always criticized the law and proposed numerous alternatives over the last few years. Some political parties were opposed to the move, but not as staunchly as when Morsi was in power. The EDSP, Egypt Freedom Party, and the Dostour Party issued a joint press release criticizing the crackdown and the ultimatum against the organizations only to be silent since. EDSP did not call for a protest in support of the civil society as it did under the rule of SCAF. With the exasperating case of human rights groups in 2016 and the unprecedented fierce attack against the civil society, the same parties that jointly criticized the NGOs in 2014 issued a new statement in solidarity with the human rights organizations.

As controversy renewed on the new associations law late in 2014, the FEP alone called on the government to pass the law in coordination with the civil society or wait until a new parliament is elected. In mid-2015, despite criticisms from Egyptian and international human rights organizations for the human rights record of the Egyptian government, the FEP praised freedoms in Egypt. In 2016, the party criticized the European Parliament for commenting on the status of human rights in Egypt, including the repression of human rights groups. The party accused “illegal” human rights organizations of communicating with and presenting a false image on the situation in Egypt to the European parliament. The FEP also criticized statements by U.S. Secretary of State John Kerry on the case of civil society organizations, describing the statements as premature. The party participated in a parliamentary delegation to meet the European Parliament to defend the human rights records of the Egyptian government.

In 2014, the Nour Party criticized the NGO bill as permissive of executive branch influence. Nour was not defending the principle of freedom of association per se; at the party supported Salafist associations, who are largely dependent on foreign funds from the countries of the Gulf Cooperation Council. As the human rights situation worsened anew in 2016, the Nour Party criticized the European Parliament statement and rejected the organizations propagating ideas and values contrary to those of the party. It supported the Egyptian government in accusing human rights groups of being illegal and boasted of participating in the delegation assigned to meet with the E.U. It is noteworthy that the Salafist groups did not undergo any government harassment, unlike human rights defenders who are under travel bans and asset freezes.

Defending human rights and freedoms has always been central to the struggle of non-Islamist parties against the rule of the Muslim Brotherhood. Defending freedom of association and free operations for human rights groups was a key statement of the battle. However, after the ouster of the Brotherhood, many political parties proved to be two-faced when it comes to defending human rights and freedoms. It can be argued that some of the key political parties see human rights as a tool to exert pressure on the regime. The tool is abandoned once those parties are in power or manage to topple their opponents from power. The rule applies to parties across the spectrum, from Islamists to liberals.

The situation of human rights and civil society organization in Egypt now is at its worst, exceeding the situation under Mubarak or Morsi. However, most of the parties that grouped early in 2013 to defend the principles of human rights and freedoms changed their stances later in the year, despite the flagrant human rights abuses of the interim regime. The parties striving for a minimum respect for human rights and civil society freedom do not put forth enough efforts, even compared to their actions under SCAF or Morsi. The Brotherhood, which suppressed the civil society once in power, is now criticizing the repression of NGOs only to smear the Sisi regime, not out of a genuine belief in human rights and the role of the civil society. The Brotherhood is yet to review its positions and actions over the last five years. They are certainly not alone in having to review their positions. Non-Islamist political parties need to realign their stances on the human rights system in general and the crackdown against human rights groups over the last three years, in particular, as they helped aggravate the situation by either supporting the regime actions or turning a blind eye.