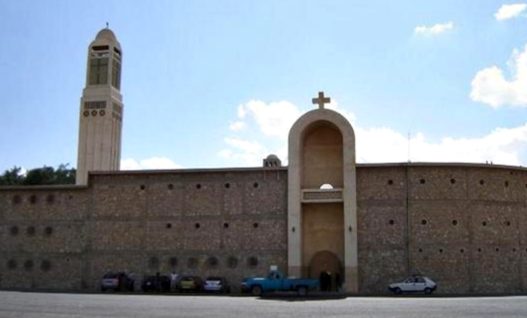 This article was translated from Arabic to English. Read the original version here.

It is no secret that the 2,000-year-old Coptic Orthodox Church is currently going through a period of hardship, specifically in the wake of the murder of Bishop Epiphanius, the abbot of the Monastery of St. Macarius, inside his monastery. The prosecutor-general charged two monks—Ashayaa (or Isaiah) al-Makari (now Wael Saad Tawadros), 34, and Faltaos al-Makari, 33—with killing Epiphanius. The first trial of the monks was scheduled for September 23 and adjourned until October 27. In response, Pope Tawadros II has issued 12 decrees seeking to restore discipline in monastic life. The most important of these are a freeze on accepting new candidates for monkhood for a year and a ban on current monks leaving monasteries without “valid justification or prior approval by the abbot.” Monks are also prohibited from using social media.

Regardless of the motives for committing the crime, the scenarios for its interpretation are viewed as a cause for concern, in light of the context in which the crime took place, the responsibilities of the late bishop, and the crime scene itself. To put it more pointedly, it was the first time such a horrendous murder of an abbot took place inside a monastery—which was emphasized by the church’s urgent decrees to regulate monks’ behavior in Egypt. Although it is too early to reach final conclusions about such an incident, the murder and the church’s response offer insight into the church’s relationship with the government.

What happened at St. Macarius (or Abu Makar) Monastery is not an “ordinary” criminal offense, committed by a citizen against other, but the assassination of a prominent bishop by a monk with the help of another from the same monastery. The murder was due to a number of overlapping reasons. One potential motive is “administrative differences” between the main suspect—Ashayaa al-Makari—and his superior. As a result, Makari was defrocked several days later over what church officials called “violations of monastic rules.” Other reasons could be related to ideological differences in the church. In other words, the motive for the crime could be the victim’s intellectual movement and the perceived need to put an end to this growing movement within the church.

This murder warns of repercussions that will be serious and tough if church officials fail to properly deal with the crisis. The first warning is that violence has crept into monasteries. These places were usually far removed from the world of crime, especially murder, given the ascetic nature of the monastery. If ideological difference is among the crime’s motives, a second warning suggests that theological differences among clerics are moving from a stage of defamation and accusations of heresy to a stage of physical violence. The third warning shows there is a significant problem in the monastic admission and teaching system.

It is difficult to read the murder of the abbot in isolation from the importance of this monastery in the theological conflict within the church and the papal headquarters, not to mention the role of Bishop Epiphanius in the decision-making process. For many years, the relationship between the monastery and the papal headquarters—before the election of Tawadros II in November 2012—witnessed not only heightened tension, but also intellectual and administrative estrangement. There were two dominating movements inside the church. The first, led by Pope Shenouda III, was a conservative Coptic movement. It is a dominant, powerful, and more one-sided movement that combines the scripture and its interpretations, and supports the church’s crucial role of representing the Copts and dealing with them as a religious sect. This movement was backed by the Egyptian state for many reasons, the most important of which was that treating the Copts as a single bloc supports the political regime. The second movement was a reformist Coptic one, led by the late Father Matta al-Meskeen (or Matthew the Poor). Being in charge of the monastery for many years, Matta was opposed to seeing the church as a Copts’ institution or a replacement for the state. In fact, he refuted the idea that the church speaks to the state on behalf of Copts. This movement was found mainly in St. Macarius Monastery, especially after the wave of accusations launched by the first movement against the second, which was mainly that the latter corrupted the doctrine. Matta’s books were banned and removed from circulation at churches.

The administrative estrangement was caused by the failure of Shenouda III to control St. Macarius Monastery during his 41-year papacy. The monastery remained far from the centrality of the church, and enjoyed great independence in selecting its monks, setting the rules governing them, and managing the monastery’s economic resources. Since the election of Tawadros II in 2012, the tension between these two movements was palpable. It was mainly about Tawadros II’s views, which were more closely aligned with Matta’s and, in turn, did not coincide with Shenouda III’s. These views were clearly reflected in Tawadros II’s heavy emphasis on taking action toward the administrative reform of the church, addressing critical cases such as personal status issues, encouraging openness to other world churches, and strengthening relations and theological dialogues with them.

Pope Tawadros II sought to bring his supporters to the papal headquarters and exclude a number of officials of the old guard from the process of decision making in the church. Epiphanius, who had been one Matta’s disciples, gained the trust of Tawadros II, particularly in reviving the patristic heritage and strengthening relationships with world churches.

Thus, the anger of the other extremist movement—led by former secretary of the Holy Synod Bishop Bishoy, a number of senior bishops, and the Faith Protectors Association—was rising and growing. The Faith Protectors Association, which was made up of priests and teachers, used to publish lists of those believed to corrupt the doctrine. One of the most noticeable differences was the mutual recognition of baptism with the Catholic Church during Pope Francis’ visit to Egypt in April 2017. There was more disagreement before the recent meetings of the Holy Synod last May. Many decisions were made during these meetings, which caused a radical and structural change in the positions of the committees’ officials in the highest religious authority in the church, the Holy Synod. The late Epiphanius was appointed as an observer of the Papal Commission for Dialogue with Churches, and the Secretariat of the Holy Synod was changed.

It is difficult to reach a generalized conclusion, at least from the circumstances in which the incident took place, about the relations between the conflicting parties inside or outside the church. However, the ideological differences within the church have cast a shadow over the way the church’s leaders handled the crisis. It is important to note that the church showed a desire to announce the results of investigations. They stated from the outset that the criminal would not be covered up; this was also underscored by the pope in a sermon. This attitude was shown when the investigating authorities announced the names of the perpetrators and instigators and their motives for the crime. The church did not minimize the impact of the incident. Church leaders realized that the death of a bishop could not be described as an isolated incident. Therefore, the Committee for Monasticism and Monastery Affairs issued decrees for regulating monastic life in light of the martyrdom of Bishop Epiphanius. According to the statement issued by the committee, new admissions to the monasteries shall be suspended for a year, no financial transactions shall be conducted without permission of the abbot, no monks shall speak to the media, monks shall close their social media accounts, and no monks shall leave the monastery without permission.

Despite the institutional response, conflict still exists between the two movements within the church, even though Tawadros II asserts that the church is not a commodity that needs protection, as the church is protected by Christ, the Lord of the Church. However, an extremist movement of clergy is silent now, waiting until these difficulties pass and confronting another challenge. The leaders of this movement ignored the killing of the bishop, as if nothing had happened.

Outside the church structure, Coptic activists tackled the incident with extensive and heated discussions, especially on social media. The extreme sensitivity usually associated with discussing such issues relating to the church and the Christian clergy dissipated. Coptic activists are no longer worried about expressing their opinion. In addition, there was no fear of how the Muslim majority would react to this incident. Each side presented its view, which included clear accusations that some clerics played a direct or indirect role in such circumstances. This may be due to the Copts’ participation in the public sphere after the January 25 Revolution. They acquired community experience and wanted to discuss Christian issues with transparency and without sensitivity.

As for the state’s response, this incident may be used as a justification for imposing further restrictions on visits to monasteries, and the effective presence of the security services. For a year and a half, church trips were banned, unless permitted by security agencies, on the pretext that they could be targeted by armed groups. Now the security agencies may be present inside monasteries instead of being outside, which will affect the independence of monasteries.

On the other hand, this crisis affords the opportunity to conduct structural reforms in the church’s teaching and management system. This incident may be a chance to restore the balance lost in the relationship between the clergy and Coptic laymen. The announcement of the killing of Bishop Epiphanius, the decrees issued by the Committee for Monasticism and Monastery Affairs, and Tawadros II’s speech are considered to be the first steps in a long and hard journey to address the repercussions of the crisis. Such change will not work without a common understanding between the church leaders and Copts of the adverse effects of the current situation on both the Coptic church itself and on Copts.