Egyptian artists were deeply involved in spearheading, capturing, and influencing the January 2011 uprising. In fact, the artistic community lost one of its own when 32-year-old Ahmed Bassiouny died in the early days of the uprising while taking part in the protests. For four days, the contemporary digital artist and experimental musician documented the protests in videos, which were then posted online each evening. On January 28, 2011, known as the Friday of Anger, Bassiouny left home and was never again seen alive. The footage he filmed that monumental day was never recovered. In May 2012, at the 54th Venice Biennale, I stood in awe as I watched the videos filmed by the now-martyred artist represent Egypt as the country’s official entry in the state’s pavilion at the Giardini.

In the years leading to the 2011 uprising, two significant changes took place in the Egyptian art world: graffiti art became legitimized and digital art blossomed. These two developments were spurred in large part by artists under 30, who did not always conform to more traditional expectations of what art should be. For them, Cairo itself became a canvas, and new media meant that their imagination was no longer limited by the physical constraints of older forms. In addition to the established Cairo galleries, a number of underground pop-up shows started appearing in Cairo. These pop-up shows were hosted in artists’ apartments and other common spaces, where they could be free of any state-imposed restrictions.

However, while the media of these revolutionary artists may have been novel, art activism is by no means a recent phenomenon in Egypt. After all, Egypt is no stranger to political upheaval, and artists are no strangers to political activism. In fact, many of the themes tackled by the new artists of the revolution— revolution, resistance, freedom, and social justice— have been treated by artists during times of upheaval throughout the last century.

As early as the interwar period, Egypt saw a proliferation of activist artist societies, including the pro-leftist Society for Artist Propaganda, conservative pro-Muslim Brotherhood artists, and the nationalist artist society, Young Egypt.

Perhaps the most famous of these societies was the Art and Freedom Group, which “identified with the European antifascist resistance and rallied for freedom of expression.” In 1936, George Henein, who would go on to found the Art and Freedom Group two years later, travelled to Paris and met the French writer and founder of the Surrealism movement, André Breton, who inspired Henein to defend artistic freedom ((Grove Encyclopedia of Islamic Art & Architecture. p. 226.)) in the face of Hitler’s campaign against so-called degenerate art. The group, which included artists such as Ramsis Yunan, Fuad Kamil, Kamil El Telmesani, Kamal al Mallakh and Inji Aflatoun, announced their “Long Live Low Art” manifesto ((The Middle East in Focus: Egypt. Edited, by Mona L. Russell, p. 256.)) in 1938.

The Egyptian activist artists were no strangers to regional political developments either. In 1948, Henein broke off relations with Breton in an emotional letter following the French artist’s position on the creation of Israel.  According to Sarane Alexandrian, Henein’s biographer, a painter of the group “[claimed] that it was contradictory for surrealism, having always fought the state, might [sic] now help form a new one.” ((Al-Tatawwur (Evolution): An Enhanced Timeline of Egyptian Surrealism, by Alexandra Dika Seggerman, p. 21.))

In 1949, only few years before the collapse of the Egyptian monarchy, the 23-year-old son of an Alexandrian religious scholar unveiled what was to become his masterpiece, and one of the most recognised Middle Eastern works of the 20th century. Abdul Hadi El Gazzar’s 89-by-96 cm oil on cardboard painting is known by at least half a dozen names, including Line of Hunger, The Theatre of Life, and Popular Chorus against Injustice. The painting depicted eight barefoot women and one girl standing side-by-side with empty plates in front of each of them. It may be unclear what El Gazzar wanted to name the painting, but its message was crystal clear to all who suffered the crippling poverty common during the rule of the inept and corrupt King Farouk.

The painting, a clear criticism of the monarchy and ruling elite, was submitted to an exhibition at the request of Egyptian art scholar and artist Hussayn Yousuf Amin, founder of the Contemporary Art Group of which El Gazzar was a member. Following its unveiling in Cairo, both El Gazzar and his teacher Amin were arrested and put in jail only to be released following an intervention by the renowned Egyptian lawyer-artists Mohammed Nagi and Mahmoud Said ((The Politics of Art in Modern Egypt: Aesthetics, Ideology and Nation-Building, by Patrick Kane, p. 49)). In fact, following the fall of the monarchy, the new Egyptian republic commissioned a second version of the Popular Chorus after the original went missing. 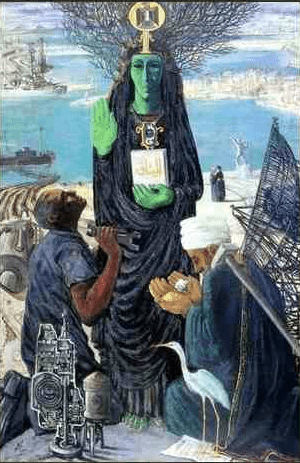 Artists are political by nature. They may equally challenge authority as sympathise with it. El Gazzar, having suffered through the monarchy, embraced the new republican regime led by populist Egyptian president Gamal Abdul Nasser. Perhaps El Gazzar’s most famous and recognisable painting was the 1961 piece The Charter, which depicts a woman wearing a crown, holding Abdul Nasser’s manifesto [left]. The piece, which is now exhibited in the recently reopened Egyptian Modern Art Museum, instantly became an icon of the 1952 revolution ((Creative Reckonings: The Politics of Art and Culture in Contemporary Egypt, by Jessica Winegar, p. 270.)).

Among the youngest members of the aforementioned Arts and Freedom Group was Egyptian Injy Aflatoun who joined the group at the age of 18. Coming from an upper-class family did not prevent Aflatoun from joining the Marxist movement in Egypt. In 1959, the 35-year-old French-educated daughter of a wealthy landowner became one of the first female political prisoners in Egypt and was jailed for four years for belonging to the banned Communist party. Rather than end her social activism, Aflatoun’s imprisonment reinvigorated it. Ironically, the countless inmates she encountered in jail, including women who were serving sentences for their husband’s crimes, encouraged her, and inspired some of her most iconic images. If the state’s goal was to silence her, then its plan had backfired.

Sadat’s era was especially notorious for its blanket blacklisting of artists including Georges Bahgoury, who was for some time forbidden from entering Egypt. Bahgoury went on to publish a book titled “Banned Artworks” of highly critical paintings and caricatures created after Sadat signed the Camp David treaty. Sadat’s strict blacklisting extended to intellectuals and artists, as well as radio, television, and theatre personalities. In some instances the blanket ban extended to family members of banned artists as well, as was the case with actor Salah El Sadany, whose younger brother Mahmoud was the original target of Sadat’s ire.

The two artists best known for their criticism of Sadat, however, were Ahmed Fouad Negm, a poet, and the blind composer Sheikh Imam Issa. The two regularly performed together. Negm, who Sadat referred to as “the obscene poet,” was given an 11-year sentence while Sadat was in power.  In addition, in September 1981, Sadat carried out a mass imprisonment of almost 1,500 critics including artists and intellectuals, some of whom were released soon after Hosni Mubarak took office.

Mubarak’s first years in office following Sadat’s assassination witnessed the use of art for political ends. In February 1982, Egypt’s newly-opened embassy in Israel presented an art exhibition in Tel Aviv’s Habimah National Theatre that showcased the artwork of Mahmoud Said, in the presence of Mahmoud Radwan, Egypt’s Minister of Culture at the time. The following May witnessed the first exhibition of Israeli artists in Cairo’s Le Méridien Hotel. The Egyptian intellectual elite, save a few government representatives in attendance, largely boycotted this relatively rapid state-sponsored normalization of cultural relations between the two countries. In response, a group known as “Artists Against Normalization (with Israel)” was formed.

June 2005 coincided with the anniversary of Sheikh Imam Issa’s death, an occasion that the artistic community used to launch the group Artists for Change, which demanded Mubarak not seek a sixth term. The group, whose founding statement was read by Ahmed Fouad Negm, included artists such as Adel Al Siwi and novelist Son’allah Ibrahim.

Today a new generation of Egyptian activist artists carry the mantle of social justice and human rights. At times, their work takes a humorous angle, in the form of cartoons and political satire printed in newspapers, perhaps targeting a niche audience. The work of Anwar and Andeel exemplify this approach. Other twenty-something artists including Keizer, Sad Panda, El Zeft, Nazeer and Ganzeer, are known for their giant, edgy political street art that is displayed for the general public. However, this genre often attracts the attention and disapproval of the authorities, often forcing them to show their work in pop-up exhibitions in their apartments – just like in times past. It seems that the more things change, the more they stay the same.

This was originally posted on TIMEP’s website as a blog post.
Related Content
Music in Egypt in the Last Decade: Hit and Run with the Authorities Analysis 05/03/2021
On Ahmed Naji Analysis 02/23/2016
The Jewish Quarter: A Missed Opportunity Analysis 07/21/2015
Between a Rock and a Hard Place: The Fate of Revolutionary Art in Egypt Commentary 10/31/2014
Art as Political Expression Commentary