Today marks the two-year anniversary of the Egypt Economic Development Conference (EEDC), an event hyped by the Egyptian government and business community in an effort to restore trust in Egypt’s economy and bring in much-needed foreign cash. Since the conference, foreign direct investment (FDI) has indeed increased, but that does not necessarily bring good news to the unemployed and wage earners. The EEDC might be succeeding in giving Egypt more electricity and houses, but it remains to be seen whether Egyptians will be able to pay for them and for the mounting debt they are leaving behind if they remain unemployed and increasingly poor.

But how did this impact other key economic indicators such as unemployment and real wages? According to figures from the official Central Agency for Public Mobilization and Statistics (CAPMAS), unemployment since the EEDC has seen a meager decrease from 12.7 percent at the time of the conference to about 12.4 percent at the end of 2016. Unemployment remains significantly higher among youth and university graduates. This flow of foreign cash did not stop the Egyptian pound (LE) from its freefall from LE 7.63 per dollar at the time of EEDC to fluctuating around LE 17 per dollar two years after the EEDC.

Additionally, the failure of the new investment policy to prevent the pound from declining caused real wages to decline both when adjusted for inflation and when measured in USD terms. According to figures from CAPMAS, the average monthly wage[1] at the end of FY 2014–15 was LE 3,708, or $501 by the exchange rate of the time; in FY 2015–16, that wage increased in pounds to LE 4,078 but decreased in dollars to $477. Beltone Financial has projected, in a report for its clients, that wages would go up to LE 4,894 by the end of FY 2016–17, but that is now only $316. In order for wages to keep up with inflation, the average monthly wage should be at least LE 5,278 by the end of the fiscal year, which is significantly higher than Beltone’s projection, but even that would mark a significant decline in dollar terms (see Table 1). 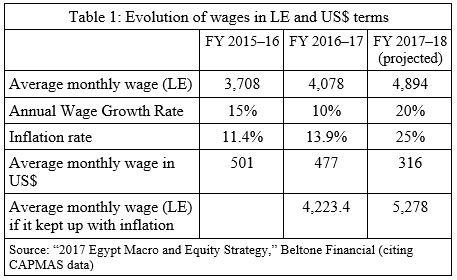 Why did the increased flow of FDI that resulted from the EEDC and Egypt’s aggressive pro-investment policies fail to prevent the dollar crisis, curb inflation, maintain real wages, and boost employment? The kind of FDI Egypt managed to attract was not designed to solve these issues—on the contrary, it might have helped aggravate it.

Given Egypt’s economic ills—high unemployment, high inflation rates, and a very large deficit in the balance of trade (which is in turn causing too much demand for foreign currency)—Egypt needs FDI that is labor-intensive and relies heavily on local expertise and products. The FDI attracted by the EEDC was not the needed kind of FDI due to a lack of a clear and coherent investment policy tailored to the specific and unique needs of Egypt.

“It is difficult to judge now after only five quarters of data,” Mohamed Gad, an economics journalist and analyst, said in an interview. “Even if petroleum investments have increased, what about the non-petroleum investment? This kind of FDI will not solve the dollar crisis because it depends on importing equipment and expertise creating more demand for foreign currency. The $10 billion Siemens deal is an example of this.”

The Siemens deal meant to build three power plants in Egypt was indeed the highlight of the conference, but most of the other deals were also in the energy sector. This $10 billion, when spent, will appear in the FDI data, but it will also be added to the external debt bill. A good chunk of it will also be added to Egypt’s imports bill for importing the quite pricey equipment needed to operate the power plants. Only 27 percent of the cost of the project will be paid in Egyptian pounds.

According to Siemens, the company’s projects in Egypt will create about a 1,000 jobs. With a capacity of 16.4 gigawatts, the new megaproject will undoubtedly increase the supply of electricity significantly. However, creating a mere 1,000 jobs will clearly not give much-needed employment to Egyptians. Also, because a good part of the equipment and the expertise will mostly come from Germany, the impact on the exchange rate was and will be minimal.

“The government is trying to make up for its failure to save manufacturing and tourism by bringing in foreign investment in the oil sector, the construction sector, and of course indirect investments in dollar and euro bonds as its means of dealing with the current economic crisis,” said Gad. “This is capable of providing short-term relief, but these investments don’t provide sufficient or stable employment and increase the long-term volatility of the economic situation.”

Among the tens of billions of dollar deals signed and announced at the EEDC, only two deals worth $500 million each were announced in the manufacturing sector (by PepsiCo and Beyti), whereas the six biggest deals in the energy and oil sector totaled about $52 billion, and the eight largest real estate and construction sector deals totaled about $15 billion (see Table 2). 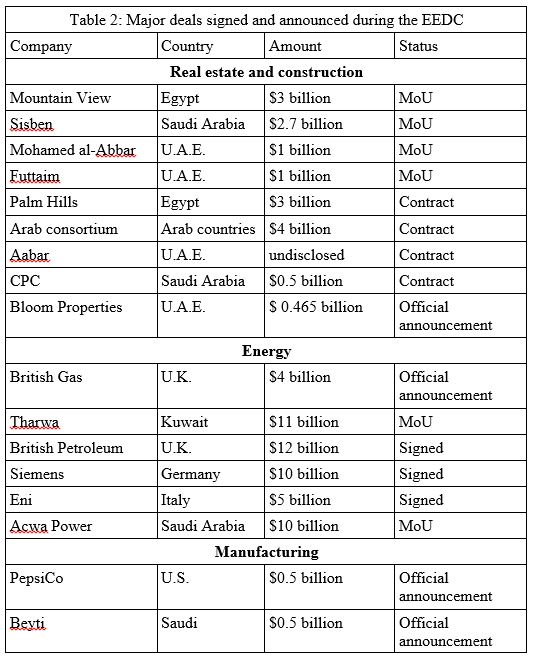 The risk now is that the current type of FDI Egypt is attracting will have minimal impact on employment, and possibly increase Egypt’s external debt and import bill. Instead, the country should be working to attract FDI in labor-intensive industries that relies on local products and expertise in sectors that do not provide only seasonal or short-term employment. This will allow Egypt to boost employment, prevent another freefall for the pound, and ensure that some of the new cash reaches local businesses and workers. More importantly, it will also ensure that Egyptians have a suitable income to enable them to pay for all this new electricity and the mounting debt it will create. The EEDC will make Egypt produce a lot more electricity, but it does not show how Egyptians will be able to pay for its increasing cost with lower wages and without creating jobs.

[1] CAPMAS does not clearly denote whether it uses mean or median wage to determine the average wage.