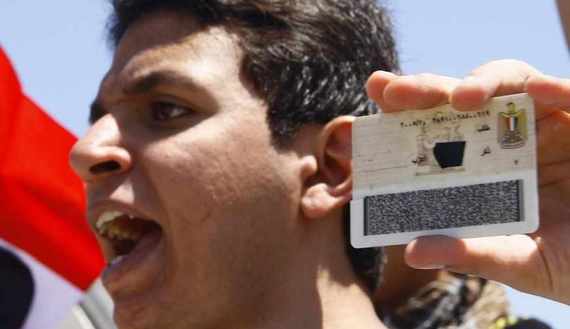 Photo by Ahmed Atteya for Al-Monitor, used by permission
This piece first appeared on Eshhad on January 16, 2017.

Though successive Egyptian constitutions have stipulated that the freedom of belief is “absolute,” “guaranteed,” and “protected,” the actual policies of Egyptian governments prove that it is inherently violated and restricted, unless under some exceptions.

Both previous and current state policies regarding the religion field reveal the restricted and conditional freedom of religions, with the need to choose from the three Abrahamic religions—Islam, Christianity, or Judaism. Outside of these options, Bahá’ís for years suffered rejection of documenting their religion by the personal status authorities, managing only rarely to register “Bahá’í” or “other.”

In 1995, the state started documenting citizen data in electronic databases, with 2008 as the deadline for using the old paper identification. At the time, Bahá’ís faced utter rejection of documenting Bahá’ísm as a religion, with some civil servants asking them to choose between Islam and Christianity. They faced numerous difficulties in receiving official documents, applying for jobs or study, administering marriage according to the Bahá’í faith, birth documentation and other basic services. After years-long legal battles in the administrative courts, in 2009 Bahá’ís were allowed to place a dash (-) in the religion field.

To implement the ruling, Minister of Interior Habib al-Adly issued decree No. 520 of 2009, stipulating:

The sign (-) shall be placed in the religion field for the Egyptian citizens previously registered or who have in their possession or in their parents’ possession identity documents with no reference to one of the three Abrahamic religions or where (-) is placed in the religion field, or in implementation of final judicial rulings. The ruling shall be applied to all templates and other documents attached to the Bylaws, provided the person concerned submits a request to the Assistant Minister for the Personal Status Authority or his deputy, to be filed in the designated records.

This ruling instituting the limited exception for this minority indicates the original restrictions on religions and creeds. It highlights the practical violation of numerous rights—religious marriage ceremonies, building places of worship, and others—by the state’s acknowledgment of certain religions. This in turn is related to the security practices criminalizing as a security threat any religious gathering or expression other than the three Abrahamic religions. In consequence, arrests, detentions, and even trials are conducted under the pretext of fighting “promotion of extreme ideas threatening national unity”, as mentioned in Article 98(f) of the Penal Code.

In November 2014, Hani al-Meehi submitted an application to the Personal Status Authority (PSA) to change his religion from “Muslim” to “Nonreligious.” His request was denied and he received a letter from the PSA legal department stating that he “must prove his affiliation to one of the three Abrahamic religions and that “Nonreligious” cannot be placed in the religion field.”

The Egyptian Initiative for Personal Rights (EIPR) has documented testimonies by other citizens whose requests to put “Atheist” or “Nonreligious” in the religion field were rejected without any official response. Their applications for national identification were not approved unless the religion of the father is documented. Such decisions and practices do not only deny citizens the right to live by their creeds, but also force citizens to disclose false information about their beliefs. Citizens have to follow the religious practices of religions other than their true ones. They have to select one of the Abrahamic religions to follow, for example, for marriage ceremonies, either according to Islamic sharia or as Christians in a church, due to the fact that the state does not officiate non-religious marriage contracts.

As such, abolishing the religion field and state approval to document citizens’ real religions without coercion or harassment make it necessary that the state adopts marriage systems other than those of Islam and Christianity (and theoretically Judaism). The state ought to approve and document any marriage according to any belief or even purely civil marriages—requiring the amendment of the Personal Status Code.

Islam: A Religion Field Destiny for the Majority

The PSA firmly rejects changing the religion field from “Muslim” to any other religion, supported by the judiciary. In that sense, any person recorded at birth as a Muslim can never change his official religion. The majority of the population are registered as Muslims for Muslim parents, and therefore their children will be registered as Muslims. This policy maintains a Muslim majority, including nonbelievers, converts, or non-followers.

Supported by judicial rulings, this policy invokes Islamic sharia in a twisted manner and considers the conversion of anyone raised in a Muslim family (or of anyone who converted to Islam and then tries to reconvert) as “apostasy”. Though Islam stipulated the killing of apostates, the judiciary rejects such rulings and instead compels deserters of Islam to remain officially Muslim, contrary to Islamic sharia. However, in cases of expressing ideas deemed apostate, the married “apostate” is forced to divorce their spouse and is denied any inheritance from Muslim family. These policies violate the freedom of religion and belief for the majority of the citizens registered as Muslims by denying them the freedom to choose any other religion and belief.

“Apostates” who were originally Christian are luckier as the administrative judiciary allowed Christians who convert to Islam and later revoked it to be registered as Christians again. The grounds of the ruling resonate with other rulings confirming that such cases are not proof of a right to apostasy:

Amending the religion field from Islam to Christianity in identification papers does not constitute an acknowledgment of the person for what was committed. Apostates do not revoke their decision, according to the Islamic sharia principles and the rulings of this court and the decisions of the Court of Cassation. This occurs in observance of the requirements of the modern state.

This apologetic text highlights the discord the judiciary finds between Islamic legal principles and the requirements of the modern state, manifested in a simple demand for citizens to register their true religions in the religion field. However, the confusion of the judiciary between the injunction in sharia to kill apostates and the impossibility of enforcing that in the modern times led the state and the judiciary to this confused situation.

The debate on the religion field and the relevant policies opens the discussion of religious policies and the state of freedom and belief at large. It calls for substantive changes, even if the consensus of the state and the Islamists firmly shuts down any such discussions.