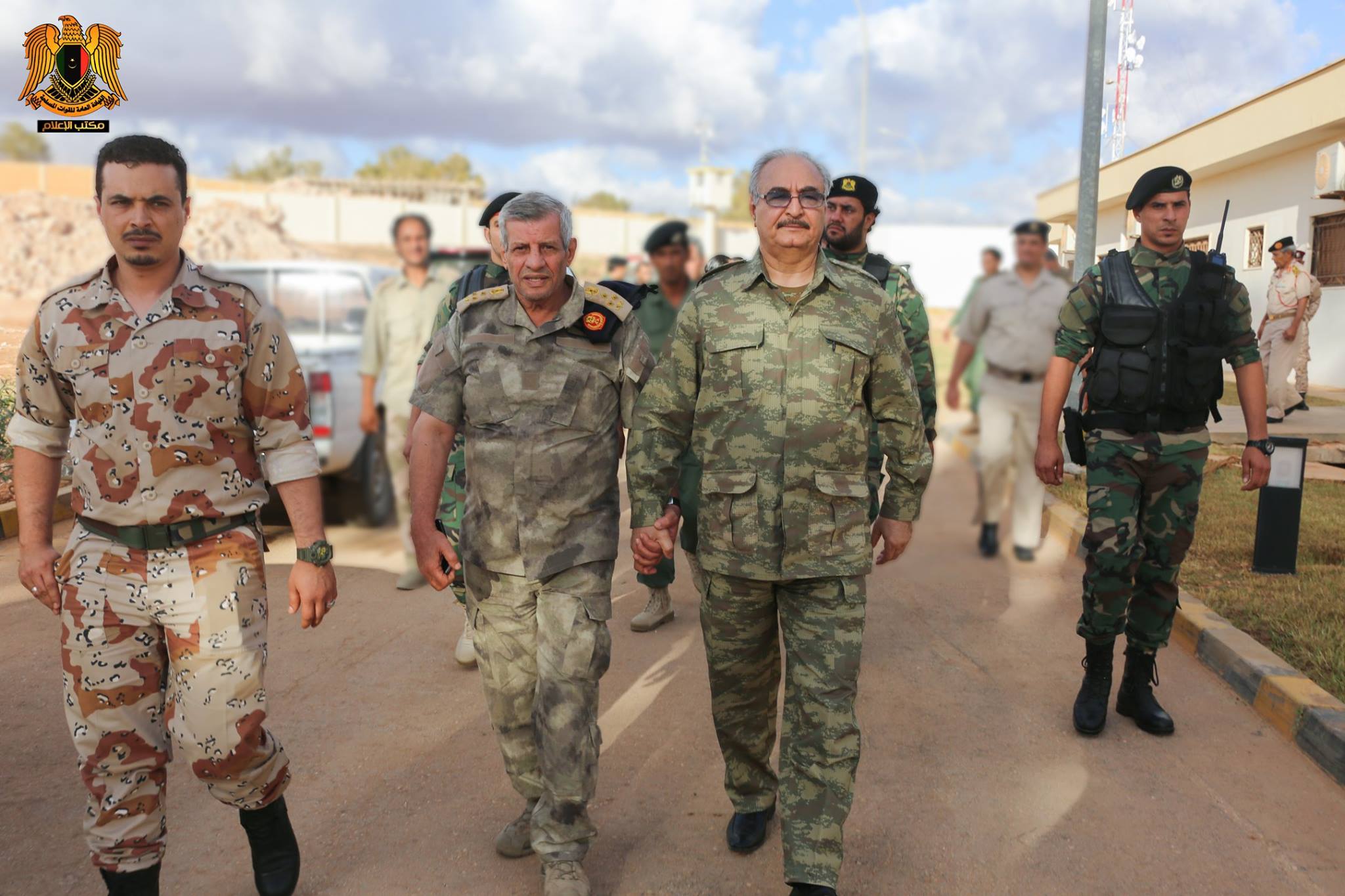 Almost a year after the signing of the Libyan Political Agreement, Libya looks no closer to cohesion than it was in 2015. The past weeks and months in particular have seen a flurry of developments, including several local political shakeups, the seizure of Libya’s largest crude export facilities, and a second failed vote of confidence in the unity government, all further empowering eastern strongman Khalifa Haftar. Through a mix of political and social opportunism and strategic calculation, Haftar and the so-called Libyan National Army are creeping into positions of incredible influence.

Political wrangling in the East
Khalifa Haftar has instrumentalized the Libyan National Army in pursuit of his political ambitions. Perhaps learning from two ill-fated coups d’état on the General National Congress in 2014, Haftar has arduously carved out power in key security, political, and social spheres using his position as LNA commander. Under the nominal control of the Tobruk-based House of Representatives, one of Libya’s competing legislative bodies, the LNA is not the country’s sole military force, but rather one of the most capable in a constellation of militias and armed factions.

Key to this instrumentalization is Haftar’s backing in the House of Representatives. Having now failed twice to pass votes of confidence in the internationally recognized Government of National Accord (that is, the unity government), the House of Representatives has effectively stalled the execution of the Libyan Political Agreement over pronounced differences on Haftar and control of the Libyan military. The United States and European Union went as far as sanctioning House Speaker and President Ageela Saleh and other figures for obstructing the political agreement. The unity government has so far largely sidelined Haftar from their process, and it even appointed one of Haftar’s subordinates, Mahdi al-Barghathi, as provisional defense minister. It is unclear just how much direct leverage Haftar has over the House—whether through surrogates or institutional power—but by virtue of his being commander of the LNA and his general popularity in eastern Libya, Haftar has enormous indirect influence over the body.

One of the most glaring examples of Haftar’s political machinations is his stacking of local offices and councils with LNA loyalists. The House of Representatives-appointed Military Governor of Cyrenaica and de facto LNA Chief of Staff Major General Abdul Razaq Nazhouri played a key role in this respect. Through Nazhouri, the LNA has replaced a dozen municipal civilian leaders in eastern cities with either military officials or loyal supporters. The eastern governor has also partially commandeered institutions like the General Electric Company of Libya and Libyan Airlines by forming committees of individuals more palatable to the LNA to lead them.

Underlying these maneuverings is an environment permissive to exploitative action, or at least one devoid of the forces, experiences, and logistical capacities necessary to minimize or deter it. Libya’s various political and security vacuums, which in many cases are superficially filled by weak or entirely self-interested actors, are merely low-hanging fruit. Especially as Haftar amasses greater strength, resources, and legitimacy, the GNA’s endeavor to stitch the country together will be increasingly challenging—that is, assuming continuation of the winner-take-all political game that both sides appear to be playing. Filling these voids, or at least making them less accessible or more undesirable for others, is crucial if the GNA is to survive. The problem is that the absence of any unified, GNA-controlled military makes this all but impossible, at least in terms of satisfying security deficits. Given the range of ambitions and motivations that define and drive Libya’s hundreds of competing militias, including the LNA, putting them together in an artificial military hierarchy under the control of the GNA is a recipe for failure.

Harnessing domestic economic and social frustration
Although eroding civilian governance and institutionalizing military rule, Haftar’s political wrangling is not necessarily changing the situation; it generally represents spheres that were already under the de facto influence of the Libyan National Army and its allies in Operation Dignity, by nature of history and demography. What makes them important is their calculated nature and the context surrounding them. Haftar’s recent capture of Libya’s largest crude export terminals from the Petroleum Facilities Guard, for example, reveals some of the broader strategic calculations at play. In September, militias loyal to Haftar seized control of Brega, Ras Lanuf, Zueitina, and Sidra ports. These facilities, which account for a majority of Libya’s crude export capacity, were blockaded by the PFG three years ago after fighters’ salaries went unpaid, effectively draining government operating revenue.  Haftar’s seizure of the facilities and subsequent return of their control to the National Oil Corporation (NOC) sent the message that he is a strongman and loyal to the greater good of Libya and its people.

The seizure further afforded Haftar leverage over the unity government and western factions, putting Libya’s lucrative export infrastructure—the foundation of its economy—squarely within LNA control. Over the short term, it will probably not reap any direct benefit for the cash-strapped eastern government. Previous attempts at exporting hydrocarbons through a parallel NOC were unsuccessful. United Nations Security Council resolutions and the international community’s recognition of the Tripoli-based NOC rendered these attempts futile. But while short-term financial benefit does not appear on the immediate horizon, this is a way for Haftar to make himself relevant to Libya’s oil dealings and to give himself a bargaining chip for future negotiations. The LNA spokesman announced immediately that it would hand over operational control of the facilities to the now-unified NOC and that revenues would be deposited in the Libyan Central Bank. But he also said that it would continue to provide “security” for those facilities, meaning that Haftar has in place the requisite forces and materiel to leverage Libya’s oil production for political gain.

Leveraging international interests
Although mixed on the question of politics and governance, foreign actors share an interest in a stable Libya, especially as it concerns combatting terror organizations like the Islamic State. “Every time we sit together with representatives of the international community [fighting terrorism and illegal immigration] seem to be the main topic,” said Prime Minister Fayez Serraj during a recent interview, expressing frustration with the inattention paid to pressing social and economic issues. Haftar’s hardline stance and role as military commander and potential spoiler make him a key player in security-focused discussions. Through this position of privilege, Haftar has cultivated relationships with the political and military establishments in various countries over the years. While centered on military cooperation—including potential arms sales with Russia, the United Arab Emirates, and Egypt; training with Jordan; and advisory and logistical cooperation with the United States, the United Kingdom, and France—these relationships afford Haftar a degree of leverage over his adversaries, and in fact delegitimize them.

Countries cooperating with the LNA outside of GNA-controlled channels of communication will most likely continue supporting Khalifa Haftar; especially for Egypt, these nations have a vested interest in seeing the field marshal assume a position of greater power. Earlier this week, President Abdel Fattah El-Sisi expressed his commitment to supporting the Libyan National Army and its efforts to maintain security. These countries’ lip service to the internationally backed unity government is a plausibly deniable failsafe that gives the international community a false sense of consensus about Libya. If Russia’s political preponderance and strategic acumen in Syria are any indication, those countries unilaterally propping up Haftar may soon be in a more advantageous position to determine Libya’s future, absent a more aggressive, more assertive, and more strategically-focused western policy. This is especially so given the direction away from multilateral approaches that President-elect Donald Trump appears bound to take. Decisively bringing the LNA commander to the table—with reasonable strings and carefully balanced positive and negative incentives—may at this point be the only way forward, barring the increasingly unlikely success of Libya’s unity government. But even if Haftar is brought to the table, the focus should be less on short-term security threats like the Islamic State and more on building viable political and security institutions.