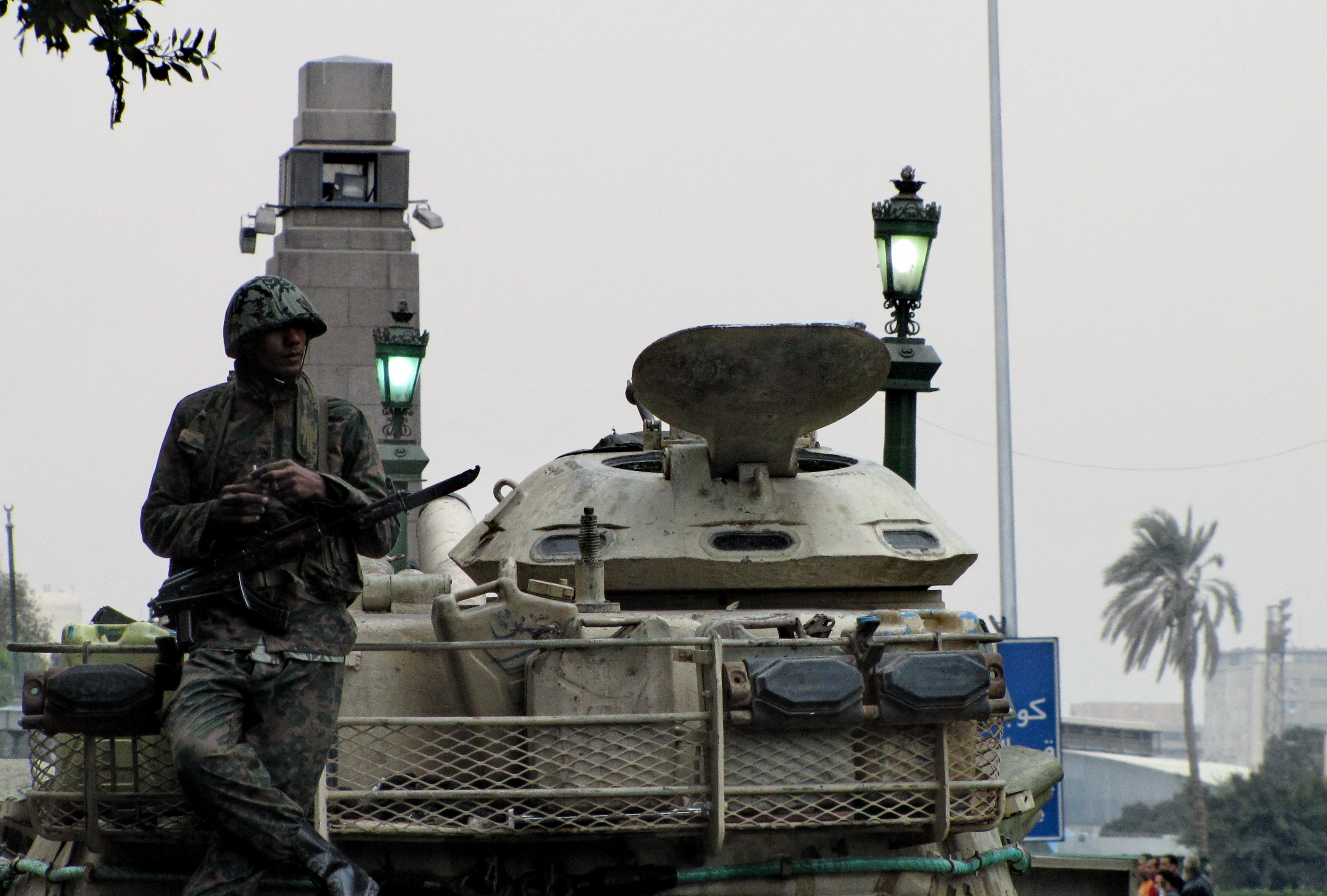 Soldier in Tahrir" by Sherif9282 - Own work. Licensed under CC BY-SA 3.0 via Wikimedia Commons.

Around seven o’clock p.m. on January 29, 2015, social media websites reported that a terrorist attack had hit three North Sinai cities of Rafah, al-Arish, and Sheikh Zuweid. Questions regarding the attacks—the apparent targets, the numbers of injured and killed—went unanswered and without any official response or media reporting for almost four hours.

Preliminary news reports collectively confirmed that a group of terrorists targeted facilities belonging to the armed forces. However, these reports varied in their coverage of the number of casualties, with numbers between 29 and 45 military officers and civilians being specified.

Following hours of anxious waiting, the official military spokesman issued a brief, uninformative statement regarding the attacks at exactly eleven o’clock p.m. The statement attributed the attacks to “terrorist elements” and indicated that they “were a response to successful military operations against terrorism.” No comment was made regarding the number of deaths and injuries or which military facilities were targeted.

On Twitter, however, the now-suspended account for Wilayat Sinai—the Islamic State’s “Sinai Province”—gave the first real details of the attacks, claiming responsibility for them, indicating which facilities they had targeted, and publishing images of the aftermath.

As a result of the government’s information gap on Sinai and lack of credibility, hundreds of Twitter users, including users belonging to IS, turned to Wilayat Sinai’s account as the only direct news source, republishing its messages hundreds of times and spreading them to a broad audience. Meanwhile, some newspapers simply published the government’s official statements, while others ignored the attacks altogether.

State policy in dealing with the public by releasing specific information and blacking out other details is no longer useful. In fact, alternative media outlets such as social media websites, which enable users to become their own reporters, have made government control of information on a particular incident impossible. As a result, social media, intentionally or unintentionally, revealed the inaccuracies of government official statements or state-owned media outlets in many cases.

Following the uprising on June 30, 2013, against former President Mohammad Morsi and the Muslim Brotherhood, which ultimately led to the military’s takeover of the government and the arrest of Morsi on July 3, widespread violence erupted, targeting the military, police, and places of worship. Shortly thereafter, then-Minister of Defense Abdel Fattah al-Sisi asked Egyptians to authorize him to fight terrorism.

Many local media outlets—those that have explicitly sided with the government—focused on accusing the Muslim Brotherhood of orchestrating all violence for some time, before all eyes turned to Sinai on August 19, 2013. Then, 25 officers of the Central Security Forces in North Sinai were killed when militants ambushed them, resulting in what is known as the Second Rafah Massacre.

Following the massacre, the military spokesman issued a series of statements, each reiterating that the armed forces had succeeded in a retaliatory operation called The Terrorists’ Dens, and government-owned newspapers published similar optimistic accounts as well, confirming that the Sinai would be free of terrorism within days. This statement had been specifically reinforced in statements made by former army officers, raising the question of whether media outlets had received orders to publish this message widely.

Media discourse continued to mislead and black out every issue related to Sinai, especially after the military forces arrested Egyptian journalist Ahmed Abu Dera’a, and the military prosecution referred him to a military court. The referral decision stated: “[Abu Dera’a] purposely reported false news and information, and broadcasted inflammatory material by reporting false news on the armed forces and their operations in northern Sinai on satellite television channels and Egyptian press, on which he works as a correspondent. [The journalist] published results contradictory to the facts of the military’s security campaign of purging criminal dens.”      Based on this and the referral decision, the public realized that Abu Dera’a was arrested simply because he published results contradictory to the results of the military operations in Sinai released by the military spokesman, confirming that the state aims to limit the press’s role on repeating the statements of the military spokesman regardless of his credibility.

In January 2015, President Sisi, during a statement on the recent terrorist attacks in Rafah and al-Arish, said: “In a meeting with journalists, I told them that the media has always been prohibited from discussing news on the military during wartime.” This, of course, was just the latest of a series of messages directed to loyal journalists to Sisi to guide them in how to perform their jobs. It is worth mentioning here that several colleagues in journalism have confidentially indicated that the chief editors of numerous newspapers have received clear orders from government officials not to publish military-related news or news on operations carried out in Sinai without clearance from the Ministry of Defense’s Department of Morale Affairs.

In November 2014, the government sought to legalize the information blackout by announcing a draft law that bans publishing news on the military, its operations, or facilities. The new draft law, however, is merely an update to Law Number 313 in 1956, of which the first article bans publishing or broadcasting news on the armed forces, their formations, operations, equipment, and officers. The law in general also bans publishing military and strategic information through any medium unless a written approval issued by the general leadership of the Armed Forces is provided in advance.

In spite of the government tightening its control on conventional media and establishing myriad roadblocks to acquiring information, it will not prevent the opposition, armed groups, or local journalists from releasing information directly on social media—a medium widely considered as a strong competitor to conventional media outlets. For this reason, there is no alternative to greater government transparency, especially during its dangerous confrontations with armed extremist groups. Without such a policy, the public is left with either unreliable official sources or propagandistic sources run by extremist groups that are used to take advantage of alternative media channels to recruit new supporters, shock the public with professionally produced videos documenting their crimes, and send specific messages. Governments do not win domestic battles unless they obtain the public’s support, which is not possible through restricting the press, oppressing the opposition, and establishing systemic media blackouts.