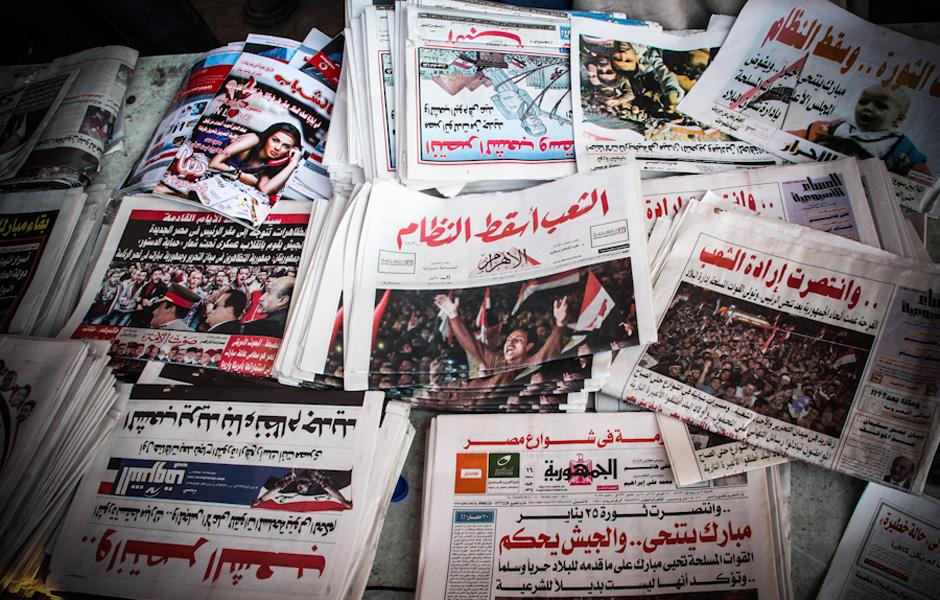 In his September 2015 interview with CNN, Egyptian President Abdel-Fattah El Sisi boasted that Egypt is seeing “unprecedented media freedom.” However, the Committee to Protect Journalists (CPJ) reports that Egypt had the worst deterioration of media freedom. Egypt ranked only second to China in the number of jailed journalists around the world. Sisi’s government continues to use national security as a pretext to repress the opposition, and perceives the media as a regime tool to promote his policies and to overlook the deteriorating economic, social and security conditions. The Egyptian authorities jailed 23 journalists in 2015, up from 12 in 2014, and notable writers Ismail Alexandrani and Hisham Gaafar have faced accusations related to their reporting. Claiming it was useful in the fight against terrorism, Sisi amended Article 78 of the Penal Code in 2014, to open the door for criminalizing any public activity funded by foreign money. The leaders of the Freedoms Committee in the Journalists Syndicate, Khaled al-Balshi and Mahmoud Kamel declared an open sit-in at the syndicate building late in February 2016, protesting the maltreatment of journalists in jails.

It is noteworthy that most of the independent and critical pro-January 2011 uprising voices have left their shows under political pressure. They have been replaced by a chorus of presenters who sing the praises of the state and the president daily, while systematically tarnishing January revolution and accusing all sympathetic parties, political activists and human rights defenders of treason. The media channels interview more former military and intelligence people to widespread the conspiracy theories against the state, most notably the January uprising.

Even as Sisi repeatedly highlights the need to revamp religious discourse, blasphemy cases continue apace. Coptic children, Islamic reformists, and writers have all been convicted of insulting Islam. Sisi has not used his constitutional authority to issue amnesty decrees related to freedom of expression or religion. In the hundreds of legislations passed without a parliament, the president showed no interest in abolishing the articles criminalizing opinion, whereby citizens are prosecuted for contempt of religions.

Freedom of the Press in the Constitution

There is no political will in Egypt to protect the freedom of thought and expression; on the contrary, the regime is subjecting traditional as well as social media to its full control. By amending the constitution in 2014, the regime tried to look more tolerant compared to the Muslim Brotherhood, by approving superficial provisions to protect human rights and public freedoms. However, a careful review of the constitution reveals how limitations were sneaked in.

“No cases may be filed to interrupt or confiscate artistic, literary and intellectual works or against their creators unless via the Public Prosecutor,” reads Article 67. “No freedom-denying penalty shall be imposed in crimes perpetrated because of such works. The crimes related to incitement for violence, discrimination or slander, shall be punished by the law.” Some welcomed the provision as a new initiative to protect creative writers and opinions against scrutiny. However, the ambiguous wording authorizes penalties for opinions invoking discrimination among citizens or incitement for violence, loose terms without specific definitions. The article also institutes state scrutiny over thought and opinion, allowing the decision of intellectual and artistic disputes in the courts. The latest such incident was the prison sentence against novelist Ahmed Naji whose novel was deemed obscene.

Article 31 of the Constitution stipulates that “cyber security is a fundamental part of the national economic and security system, protected by the state according to the law,” undermining online freedom of expression. The constitutional provision allows legislators and security agencies to prosecute bloggers and internet users who spread opinions annoying to the authorities on social media. As ever, the term “national security” is loose and lacks any specific definitions; the security forces and judiciary apply it at their whim. Article 47 restricts the right to circulate information, invoking the protection of private lives, the rights of others, and national security. All are vague and loose conditions under which the authorities can restrict citizens’ rights in general and those of researchers and journalists in particular. Both the Ministry of Communication and the Ministry of Defense have proposed anti-cybercrime bills which are currently before the parliament for consideration.

The restrictions imposed by the constitutional committee were not limited to the freedom of the press and the media. The charter calls for establishing a Supreme Council for the Media (Article 211) to set the rules and criteria to be observed by the media to protect “national security.” Article 212 calls for establishing a National Press Organization. Article 213 calls for establishing National Media Organization to manage state-owned media channels, develop their assets, and ensure professional performance. The constitution does not detail the structure of the councils or their membership criteria, nor guarantee its independence from the executive branch. These bodies are likely to further repress freedom of the press and the media in the name of national security.

Journalists New Struggle Versus the State

In the almost two years following the approval of the Constitution, a number of renowned Egyptian journalists and media professionals have worked on developing a bill for a comprehensive law governing press and media. They consulted with a government committee under former Prime Minister Ibrahim Mahlab. They were keen to ensure freedom of the press and the media and regulate ownership of outlets. The bill detailed proposals on the structure and work of the Supreme Council for Media, the National Press Organization, and the National Media Organization. The bill was commendable as it offered guarantees for the press and media freedom in Egypt, most importantly by amending the Penal Code to repeal the freedom-denying penalties in press crimes. Various ministries, however, insisted on inserting vague terms that could serve to undermine press freedom. The bill would have allowed the council to prevent the circulation of foreign printed material, and stipulated that the council protect Egypt’s “cultural identity” and ensure that press institutions abide by national security requirements.

However, the regime showed it does not welcome a unified media bill and chose instead to evade journalistic demands. After the bill was finalized in consultations between journalists and government representatives, the cabinet was changed before it could vote on the bill. The bill project was referred to the Ministry of Justice, where the new minister, Ahmed al-Zend led negotiations with journalists as a representative of the regime. The ministry expressed its wish to propose separate, limited bills to establish the three councils, which would afterward be responsible for proposing journalism legislation and issuing regulation.

Al-Zend’s approach—which may or may not prove to be the ministry’s approach after his sacking this week—undoes the proposed guarantees of freedom of the press in the unified bill and confirms that the regime insists on repressing the press. Not only anti-regime journalists and media professionals are suffering. Even regime loyalists have had their editorials blocked from printing if they depict the negative conditions in the country. “There is a component of the government that believes the country cannot afford this type of freedom,” Salah Eissa, a top pro-Sisi journalist and member of the committee that drafted the bill, said in an interview. An article by a regime loyalist, Sayyed Hegab, was not approved for publication in the state-owned newspaper al-Akhbar. Hegab himself had been a member of the constitutional committee and wrote the preamble.

The Journalists Syndicate leadership and members of the unified media bill are still lobbying for a bill to ensure a minimum freedom for the press. These efforts represent a political awakening that has unfolded in Egypt’s professional unions over the last few months, as in the Egyptian Medical Syndicate. Some of the members of the committee that drafted the constitution have launched a body to defend the Constitution and its principles, including rights and freedoms. However, such positive moves and efforts should be seen within a reality where the ruler wants the members of society to be soldiers who obey their leader’s orders without thinking or opposition. This was evident in his February 2016 speech, where Sisi expressed his great intolerance toward opponents of him and his government’s policies. He threatened opponents that he can wipe them off the face of the earth and called upon citizens not to listen to anybody except himself.

The current regime probably does not think there is anything that would keep it from pursuing its stifling of freedoms and violations of human rights. Western governments are fully aware of the level of deterioration of human rights in Egypt, yet the regime believes that through its repressive practices, it is capable of containing the successive crisis and ensure stability. The West also needs this regime in its war on terror in the Middle East, leading them to overlook the violations of human rights and be silent on the systemic violations that exceeded those under Hosni Mubarak. However, these governments know that no regime is capable of achieving stability while violating freedoms and human rights. The regime is failing to achieve minimum security while further worsening the economic and social conditions, further fueling radicalization. Western governments must support journalists, writers, and others pursuing free expression in Egypt as the only path forward to true stability.