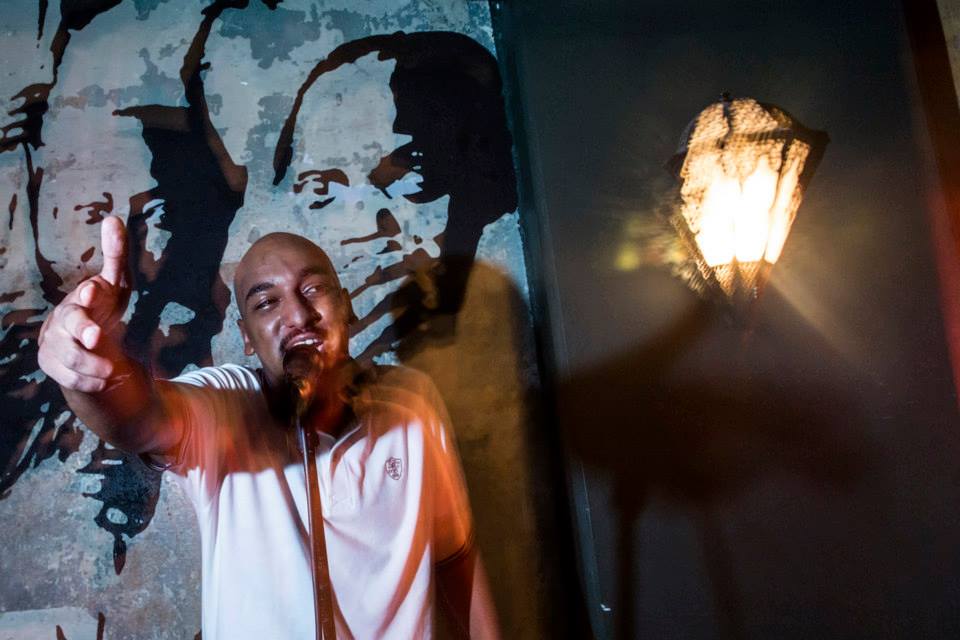 At a time of hype about “twitter revolution,” Aly Talibab has always had a connection to the street. Most often described as a spoken word artist or rapper, he began his career performing in the streets, addressing social and political issues in Egypt’s public spaces as early as 2005. While Talibab has worked in digital media as well, his real motivation comes from the face-to-face feedback he gets by using his art as a form of grassroots activism—not to spread any particular political message, but to challenge his audience to form their own ideas of politics and society.

In a society with clear red lines in terms of political thought and social taboos, Talibab describes his work as almost a mission to encourage more radical thought. This mission positions him in direct opposition to systems of authority that legitimize by restriction, whether through creating physical or social barriers to free expression.

Talibab currently works in collaboration with other musicians and artists, performing in art festivals and putting on shows throughout the Middle East. At a time when many in Egypt face restrictions on freedom of expression, Talibab described his outlook in this interview with the Tahrir Institute for Middle East Policy.

The Tahrir Institute for Middle East Policy (TIMEP): You have a really positive message for youth and communities. Can you describe this a bit?

Aly Talibab: I don’t know. I do have a message but it’s kind of getting blurry as time goes on. It became more about what I want to say, and what I want to send through my music. The big messages of having a big cause and supporting this cause, and sending it through to people – I used to do that and I used to believe in that.

What I’m thinking right now is that life is very personal. What I push for in my music is having your own character, and having your own character consequently gets you to support something – just getting back to the roots. We’re all human. When I sing a song about being human, and about dissent, and about how authorities can’t do [whatever they want] just because they’re authorities, [my audiences] are going to relate to any oppressed individual whether he’s in Palestine or whether he’s in Africa, or America, or Europe.

In my personal life, I come from a very religious, Salafi, background. This is what gets me all the trouble: “Don’t do this, do that, do this, what’s right, what’s wrong.” That is what I am most concerned about — making young kids choose their own life, or choose their own path. I am not trying to make them like me or like my music, I just want to tell them it’s alright to be different, to have views on this or that. I am not trying to project my own views on them. I’m just giving them a space [where we can] sit down and think about stuff.

TIMEP: That’s an interesting perspective. A lot of the problem in Egypt and the region is that people may not always want to change their minds about things.

AT: This is exactly what I am trying to challenge. Many of the thoughts that I project in my music, I believe in about seventy or eighty percent. I am trying to be very radical in my music just to tell the people who listen that it’s alright to see like this: Don’t fear your own ideas. People, through time, are going to get used to them.

TIMEP: How do you reach communities on a grassroots level?

AT: Right now, I find that the music is circulated in very small circles. The same people – I see the same faces [every] show. So where can we go from there? Should we move on from Cairo and Alexandria and start playing in other areas? But even when we tried that, it [wasn’t] that easy. Even when people in other governorates start supporting the scene and they invite us to their places, they get crackdowns from the police [who tell them] they can’t have shows. [Once], we played in a venue in Ismailia; the day after we played, the police came and took all the equipment, and they closed down the place and fined them with five thousand pounds. It was scary. And even if you’re trying to move outside this space that they gave you—the online [space]—you can’t work much outside it. It is very concerning.

TIMEP: Do you face some kind of backlash not just from police or the government, but even communities or people?

AT: Most of the time, the backlash doesn’t come from official police coming to my home saying: “You can’t do this, you can’t say that.” It’s from the people in the streets. It’s from the fifty- or sixty-something-year-olds, questioning what you are saying. But this is nice, to me. When [people] come up after the show and say: “I’ve been listening to your music, so talk to me about this or that.” And sometimes they don’t really like it, so they start rejecting [it].

The people in the streets – especially when we do street shows—most of the time, they don’t like it. That causes problems, even when we’re chosen to play on TV shows. They hear about Aly Talibab: “Ok, he’s good, let’s get him a show.” And then they call you before the show to see what you’re going to say, and then they just don’t like what you’re going to say. So khalas [that’s it], they don’t get you on TV.

TIMEP: What are some of the reasons that people say they don’t like your music? Is it politically motivated?

AT: It’s not [because of] extreme political stuff. The extreme political stuff was ok for some time – for the time when the people were really in the streets and the revolution was going on. But my music, the music that challenges social issues, taboos… I have a song called “Yemkin” [Maybe] that is mainly concerned with speaking about different taboos and stuff like [conceptions of] right and wrong. This is the music that finds the most opposition from the community. They are parents, right? They have authority over their kids. When their kids listen to my music, it’s like their authority is being challenged – so they don’t like that.

TIMEP: I know you talked about community backlash, but how do you feel about the state crackdown on freedom of expression and freedom of thought? Does that worry you?

AT: Not at all. We used to do this shit when Mubarak was in office. What’s the worst they can do? I’m not really afraid for artists. They’ll put me in jail, and the next day, there will be campaigns, do this, do that, and I’m going to get out. What I’m really frightened for is the young people who go to the streets and protest. Nobody knows these guys. I have a couple of friends who are right now in jail, and no one is even mentioning them.

When you take radical musicians and put them in cultural venues that speak to the government – what are you guys thinking? When you get us on stage, does this give you the excuse to be the authority? This is real. When they crack down on artists and music, this is real. What I really believe we should do is that we should campaign against them. We should send this message through to people – [the message that] this is what authorities do. This is the normal thing.

TIMEP: But in Egypt, has it gone backwards since 2011?

AT: Yes, it did go backwards. In 2011, we had a space of freedom until the Muslim Brotherhood came and choked us up. They choked the people, not through the police or the government or the authorities, but through the community – through Islamic ideologies of “You can’t say this, you can’t say that,” and “Haram, not haram.” In Egypt, as a whole community, we still have this Islamic ideology, even though people think that we’re progressive and that we’ve broken barriers. But the conservatives like the Salafis don’t see any difference in the authorities. They don’t see a different ideology being pushed, so [they ask]: “Why the hell are you fighting the Muslim Brotherhood? Why don’t you just sit down together and figure out a solution?” And that’s what they actually did in 2012.

Authorities don’t like activists, no matter what they say. They say “We really support freedoms and rights,” but they don’t really want that. And that is what happened in 2011 with the Muslim Brotherhood. The authorities – the people in power, and the felool and all that shit, the people who owned the TVs and all that stuff – they really loved us. “These guys, they’re against the Muslim Brotherhood? We’re going to clap for you guys.”

But now the real face has been shown.

Aly Talibab is a spoken word artist and musician