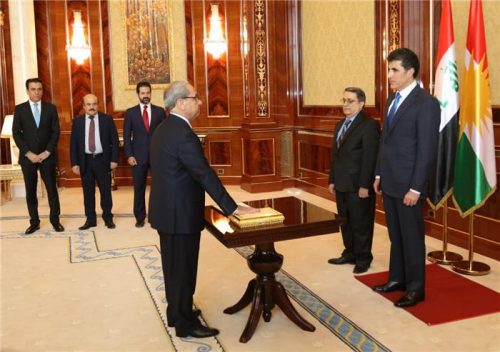 Last November, one of the Kurdistan Region’s few remaining judges seen as independent announced his resignation as a member of the regional judicial council. Judge Latif Sheikh Mustafa was protesting the intervention of the region’s two main political parties, the Kurdistan Democratic Party (KDP) and the Patriotic Union of Kurdistan (PUK), in the judiciary as well as the failure of the judiciary to act as an independent institution. Mustafa’s resignation comes after four other resignations of senior judges for similar reasons in the past four years. The two parties have long been working to undermine independence of the judiciary, but it was not until July this year that they were able to control it completely by agreeing to split and appoint the judges in the region’s top courts.

In an attempt by the KDP and the PUK to stifle the independence of the judiciary completely, the parties agreed to appoint 10 judges for the Court of Cassation, with five selected by the KDP and five by the PUK. Likewise, the presidents of the Erbil, Duhok, Sulaimani, and Garmyan Appellate Courts are KDP and PUK members and selected by them, too. In this politicized atmosphere, the judiciary system works as subordinate to the executive power. Per the Iraqi Constitution, members of the Judiciary Council of Iraq are voted on by the Iraqi parliament. Yet the Kurdistan region does not follow suit with its respective parliament, and instead, the cassation court’s 10 judges are sworn in by Kurdistan Region Prime Minister Nechirvan Barzani after being selected by the main parties.

In a previous case in which an independent judge stepped down over intimidation, Hawzhin Amin of the Kifri court issued arrest papers for individuals accused of collaborating with the former regime under Saddam Hussein in the late 1980s during the Anfal campaigns. Thousands of Kurds were killed during these campaigns, which included the Halabja chemical attacks, and Kurdish groups have sought for them to be recognized internationally as genocide. Amin’s move had followed an Iraqi Criminal Court decision in June 2007 in which arrest papers were issued for 423 accused collaborators, 258 of whom were Kurds based in the Kurdistan region. Yet Amin received death threats from those who had been accused of war crimes and genocide, and eventually he was forced into exile. In a since-deleted Facebook post, Amin said he cannot reveal his location, even were he in Europe. This made judges question: If they will be persecuted on the cases that are related to the existence of a nation, how is it possible to have an independent judiciary?

In October 2007, the Kurdistan Region established its first government following the 1991 Kurdish uprising, with the regional parliament passing Law No. 23 of 2007 (the Judiciary Law). Although the law did not meet expectations of judges, lawyers, and civil society organizations, it was a turning point in the history of region’s judiciary and step toward its independence. Yet the KDP and PUK gradually expanded their clout throughout the judiciary to the extent that almost all judges are now either affiliated with one of the parties. Attempts by the parties and government to undermine the judiciary left it at not only their mercy, but that of tribal leaders and politicians. This has posed the main obstacle to justice, democracy, and rule of law in the region because of problems with implementation of existing laws.

This has been amplified since the resignation of Kurdistan Region President Masoud Barzani in October 2017, when the powers of the president were distributed among the region’s cabinet, parliament, and judiciary. Although a bill granting the power of appointing judges to the Judicial Council was passed, judges were instead sworn in by Kurdistan Region Prime Minister Nechirvan Barzani rather than the parliament, as the law stipulates. Additionally, the new president of the judiciary was also appointed and sworn in by Prime Minister Barzani. Rather than being selected by the KDP and the PUK, the new judges should have been elected by the Judicial Council on merit, and the parliament could have investigated their background to ascertain their political affiliations and qualifications.

The judiciary in the Kurdistan region is not financially independent, as the budget is allocated by the regional cabinet, not the Judiciary Council, per the Judiciary Law. The Kurdistan Region government exempted the council and Public Prosecution employees from salary reductions over the past four years after they participated in a strike over civil servant salaries being cut by more than 50 percent. Many observers interpreted this as a deal between the government and judiciary to further control it. Ideally, the Public Prosecution would defend the rights of the public, as the government’s decision was counter to existing laws, but because of government influence, it kept silent.

Per Iraqi laws and the constitution, the Public Prosecution should be independent and part of the judiciary, but in the Kurdistan region, it falls under the Justice Ministry. This is a main reason that the Public Prosecution has failed to file lawsuits in many cases of corruption and violations made by the government. Some of public prosecutors have voiced frustration over their affiliation to the Justice Ministry, and the Judiciary Council has backed them, but the law has not yet been amended. As with the Iraqi federal government, following existing laws and creating checks and balances stipulated in the constitution, such as with the Iraqi Federation Council, would help democratization and stabilization process.

Additionally, according to the Judiciary Law, the president of the Judiciary Council holds a position equal to that of ministers, which means the judiciary is not a power equal to the legislature or executive branch. Interestingly, the Judiciary Council itself has confirmed that this undermines the balance of the powers and in 2015 called for reforms. The law also stipulates that judges elected to the Judicial Council, Court of Cassation, appellate courts, Public prosecution, and other courts should hold necessary qualifications, have years of experience in the field, and pass an oral and written entrance exams for a one-year course at the region’s Judges Institute. The KDP and PUK have controlled this institute to the extent that judges who are not supported by one of the parties cannot pass, further consolidating their control over the judiciary.

Finally, a majority of judges have KDP or PUK affiliations despite laws in Iraq and the Kurdistan region stipulating that judges must avoid political party membership, with judges appearing at party rallies during the election campaigns. In one notable instance, a group of Erbil judges visited Hiwa Ahmed Mustafa, a member of the KDP Leadership Council, to congratulate him on becoming head of the KDP’s Shaqlawa branch. Mustafa then had an arrest warrant on charges of ordering opening fire against young Sulaimani protesters in February 2011, when one protester was killed and another 54 wounded. Other problems hampering judicial independence include the power of the Kurdistan Region Security Council and politicization of the terrorism court—in which judges make rulings based on instructions of KDP and PUK security forces and clients—and the two parties’ monopolization of the Syndicate of Lawyers, which hampers its ability to defend lawyers’ rights, especially in cases related to political issues.

A local civil society group, the Democracy and Human Rights Development Center, an independent nongovernmental organization funded by the National Endowment for Democracy, recently issued a report in which it strongly criticized the political and executive power intervention in the judiciary and detailed the judiciary’s failures. Among its findings was that the number of violations were increasing: 1,003 violations were recorded last year alone, out of 7,600 total since the organization started monitoring the courts. These violations included human rights violations such as to prisoners’ rights. Moreover, the figures do not include violations in Erbil and Duhok, where the center was not able to conduct research.

The lack of judicial independence is part of a larger trend in which Kurdistan now has the weakest opposition since the first real opposition party appeared in 2009. Free media has been eliminated and the Kurdistan Parliament is controlled by the KDP. The atmosphere is increasingly politicized, particularly after August 2015, when the KDP used to the Consultative Council to extend former president Masoud Barzani’s term for another two years illegally, as well as moves that made it easier for the region’s electoral commission to ratify elections results despite allegations of electoral fraud and vote rigging. Going forward, the cabinet is expected to maintain control over the judiciary, as the KDP and the PUK will be much stronger in the new cabinet. In this politicized atmosphere, the two ruling parties exploit the weakness of opposition, free media, and civil society to further politicize and control the judiciary. The Kurdistan regional government needs radical reforms and anti-corruption measures—neither of which can be achieved without an independent judiciary. The steps made by the government and major political parties have undermined and continue to erode judicial independence, which have negative repercussions for democracy and rule of law.