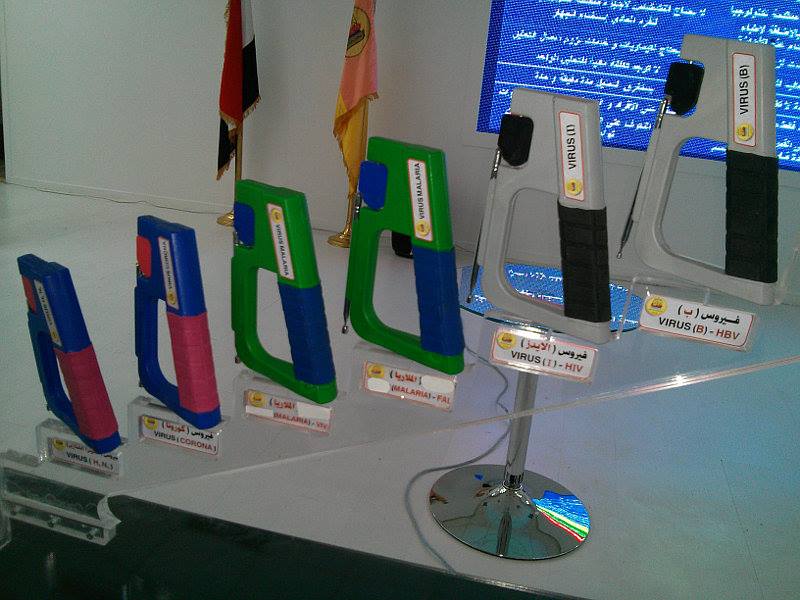 Five months ago, Egypt’s Military Engineering Authority announced that by June 30, 2014, they would be able to cure those living with HIV/AIDS and the Hepatitis C virus (HCV). They gave hope to millions of patients; the message was: “Finally we will get rid of the scourge of these crippling diseases, and our patriotic army has the cure.” A month later, defense minister at the time, Abdel-Fattah el-Sisi, announced that he would run for presidency. The promise for the treatment of HCV and HIV was part of a larger package of hopes and dreams projected into the people’s imagination.

In the instance of the HIV/HCV cure, the false hope was orchestrated by a team headed by a crackpot herbal medicine peddler, General Ibrahim Abdel Aati, with no relevant scientific qualifications whatsoever. No one seems to know how the man became an honorary general; his odd character and the claims he made were a gift to all who doubted the legitimacy of this treatment or who wanted to have a laugh at the regime’s expense.

Abdel Aati pitched his grand claims—claims that completely defied the laws of nature—directly to the media. He explained that he had been working on his own for 20 years; he does not have a single paper published in a peer-reviewed journal. He stated that powerful entities like pharmaceutical companies and foreign intelligence bodies were after him to suppress his work. Yet, despite these obvious indications that Abdel Aati’s claims fell in the realm of pseudoscience, the Military Engineering Authority went ahead with one announcement after the other.

Abdel Aati’s foolishness resulted in bad public relations and ridicule for the military, and he gave this scandal its name: Kofta. Trying to simplify the way the cure works to laypeople, he explained that the device breaks down the HIV or Hepatitis C virus in a patient’s blood by a form of electromagnetic radiation, and the outcome are nutrients: “I take the virus out break it down and return it to him as kofta.” Hilarity ensued.

While its detractors may have reveled in the absurdity of the announcement, the promise of a cure was certainly no laughing matter for the forty thousand people that signed up for the miracle cure, the figure described on the official Facebook page of the research team. Patients with HCV will develop liver cirrhosis or liver cancer if untreated, and many are denied work in neighboring countries if they test positive. (Working abroad is often the last opportunity for many Egyptians to secure a decent life.) For patients living with HIV, not only do they endure physical suffering, they are constantly discriminated against and stigmatized.

The Kofta fraud features two devices: one for diagnosis and the other for treatment. The first is called C-Fast and is claimed to work without any electronics inside it, has no batteries, and can work from a distance of 500 meters. These wild claims would cast doubt on any device, not to mention one that is designed for something as particular as diagnosing HCV or HIV. By way of explaining these wild claims, the Engineering Authority asserts that C-Fast uses the static electricity in the body of the user to move an antenna towards the source of infection.

On May 9 2014, the Engineering Authority ran a booth in a commercial exhibition for medical devices. They displayed their diagnostic device, C-fast, along with other versions they claim can detect HIV, Malaria and Corona virus. As a doctor and a concerned citizen myself, I was very curious to see the device closely, and so I attended this exhibition to garner an up-close view. 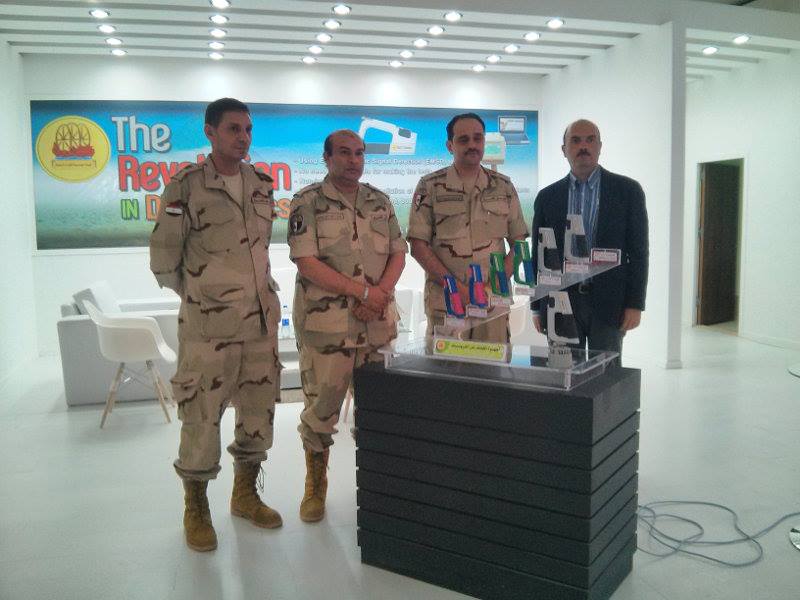 C-Fast is formed of a handle with an antenna attached to it through a free-moving, unstable hinge. Minor movements of the handle are translated through the unstable hinge system to bigger movements in the antenna. Thus, either consciously or unconsciously, a user may guide the antenna indirectly towards whatever he or she is inclined to look at (or suspects to be infected).

This function is similar to that of dowsing rods or Ouija boards, and it is known in psychology as the Ideomotor effect: a mental effect on physical action. No wonder when I asked the person using it to close his eyes, it didn’t work!

The claims, the appearance, and the functions of the device are very similar to a device that was made by a British businessman and sold to Iraqi security. The device, called ADE651, was intended to detect explosives, but its performance was no better than guesswork. An Iraqi campaign against ADE651 claims that it may have been responsible for failing to prevent the loss of 26,000 lives.

The British businessman is currently in jail in the UK for fraud. When I asked one of the generals at the exhibition if the bomb detection device was similar he said “yes, both work according to the same principle.”

This C-Fast device will soon be used for infection control and in blood banks; this is a disaster. The Ministry of Health has decided that C-Fast works based on a low quality paper published in a “peer-reviewed” journal that is as big a scam as the C-Fast device itself: a recent sting operation revealed that the journal, World Academy for Science, Engineering and Technology, was happy to publish a paper intentionally written as an incoherent jumble of Wikipedia articles and plagiarized materials.

Details about the second device were kept secret until the latest press conference by the Engineering Authority on June 28, 2014. Even during the press conference, details about how it works were not made clear and no patents or reports of any clinical trials were published anywhere. To prove the point, a hospital is being built in Ismailia to provide this new treatment, and a tourist resort will be dedicated to treat foreigners with HIV.

On March 20, in response to the media storm surrounding the initial announcement, Sisi tasked a committee of a number of doctors with examining CCD. The main aim was to respond to skeptics. The committee could hardly be called independent, as half of it was comprised of either military doctors or doctors that took part in the development of CCD. General Ibrahim Abdel Aati was excluded.

The timing of the committee formation is extraordinary, as scientific and ethical committees should examine any treatment before human trials starts and not after. Although there was never a specific date set on which the committee would announce the results of its investigation, there was no reason for a three-month delay other than to avoid the presidential elections. 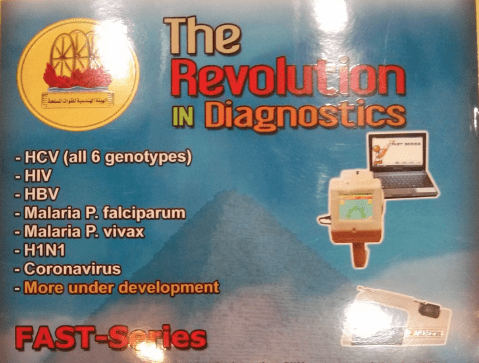 By the last press conference, inventor Abdel Aati had vanished. There was no mention of him, and this time we were told that ultraviolet light is how the device destroys viruses in the blood. When asked about the viruses in the rest of the body, specifically in the liver, it was explained that some pills will take care of that. Weeks earlier, Ibrahim had explained that the pills were some herbal concoction he has prepared.

The committee examining the device decided that further trials were necessary before starting the treatment, and the claims were reduced from announcing total cure to “we saw some response in some patients.” For this reason, the Engineering Authority said they would need another six months before providing the treatment to patients.

Sovaldi is the trade name for a new FDA approved drug for the treatment of Hepatitis C. It is effective in more than 90% of cases. The manufacturer, Gilead Sciences, has set the price of a 12 weeks treatment at the equivalent of 84,000 USD.

This is highly unaffordable for the vast majority of those living in Egypt, which has the highest prevalence of HCV in the world; a quarter (by the most modest estimates) of Egyptians live in poverty (less than two dollars a day).

Earlier this year the Ministry of Health, headed by the National Hepatology and Tropical Medicine Research Institute, began negotiations with the manufacturer to lower the price of treatment. These negotiations were independent and parallel to the Kofta announcements and received less coverage in the media. They were paradoxical given the claims that the army vanquished HCV.

The price of the treatment has been reduced to 2,000 USD for private patients and 200 USD for patients with national health insurance coverage, representing a huge reduction in cost but remaining quite expensive for the majority of patients as the national health insurance coverage is very limited. The treatment will be available in September; this is a positive step. Now, at least, a proven and effective medication will be available and with fewer side effects than drugs currently on the market. But since more than 60% of Egyptians pay for health care out-of-pocket and until generics are available, this deal was criticized as one that will cause a huge financial burden for so many and is a highly profitable venture for Gilead.

While there is no shortage of pseudoscientific claims and fraud around the world, this scandal is taking place in one of Egypt’s largest state institutions, with its most respected leaders promoting and defending it.

The Ministry of Defense collaborated with civilian university professors to put their names behind those devices. The Ministry of Health approved the trials of CCD and the herbal pills on humans before any tests on their safety and without any valid scientific basis. The scientific committee tasked with examining those claims—that decided that further tests were required—kept silent until after Sisi was elected. Public money is being spent on building a hospital for what is—now officially—a tentative treatment. The C-Fast will be used for infection control and in blood banks, potentially harming people. The scientific and medical community has not reacted, and those who did were smeared. Finally, the government invested time and resources into developing sham treatments, resources that could have been used to make bona fide treatments such as Sofosbuvir more affordable for those in need.

The Ministry of Defense did not keep its promise of a cure to millions of HCV/HIV patients by June 30, which is an embarrassment, yet until today there are no guarantees that this will not happen again. No public apologies were given, no investigation was announced, and the only signal that the army may have realized that something went wrong is that very recently the head of the Engineering Authority was promoted to a higher position with no responsibilities. Yet, we still do not know if that decision was because of the wasted money, credibility, and the dashed hopes of its most vulnerable citizens or because of the public ridicule and failure to silence critics.

All pictures were taken by Mostafa Hussein