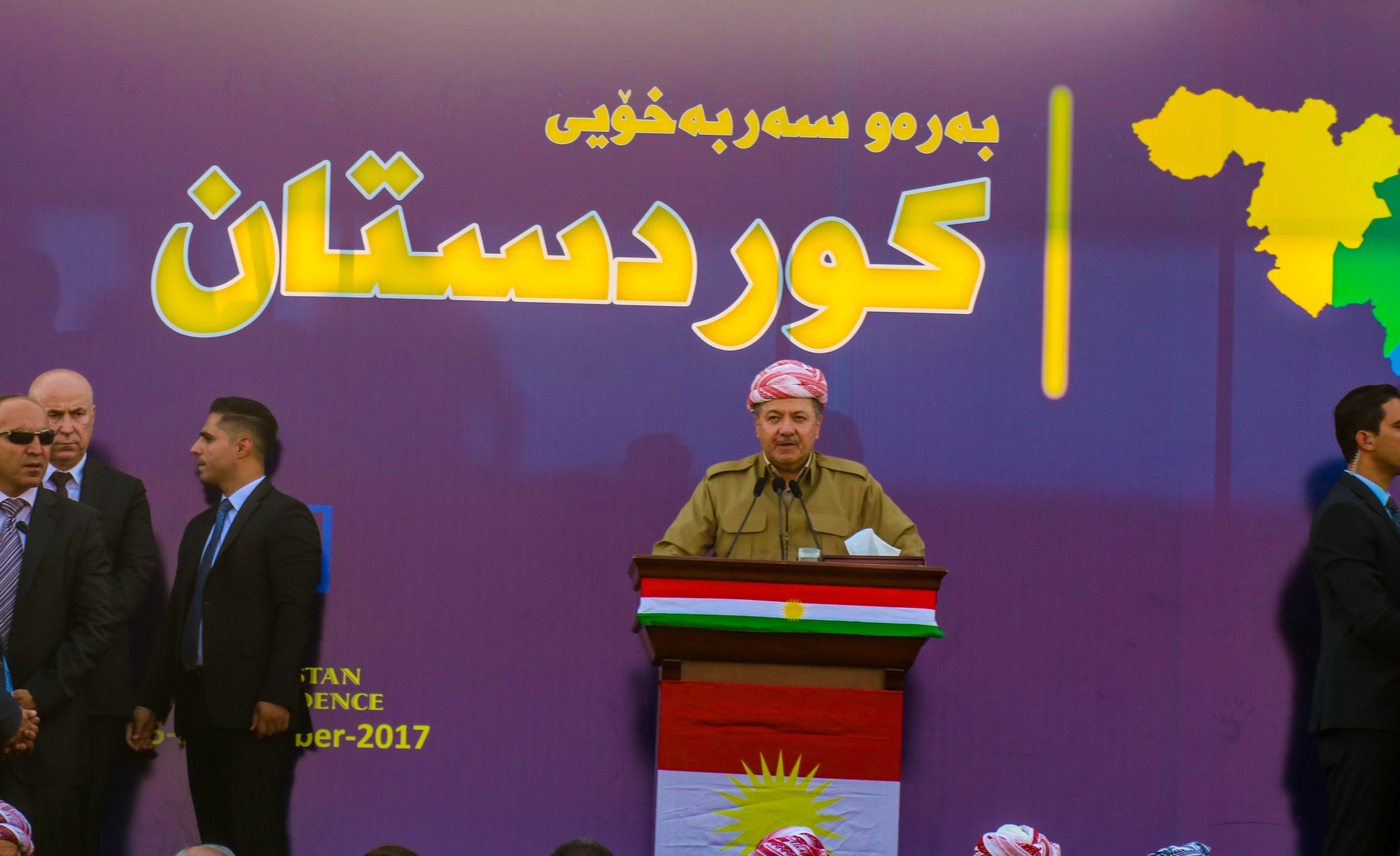 President of the Kurdistan Region of Iraq Masoud Barzani speaks at a rally in favor of Kurdish independence on September 19 in Soran (photo by Ferid Qadir).

The Kurdistan Region of Iraq held its independence referendum on September 25 despite opposition from some Kurdish political parties, the Iraqi government, neighboring countries Turkey and Iran, and the United States, the United Kingdom, and Germany. In early June this year, Kurdistan Region President Masoud Barzani met with 15 political parties, including Barzani’s Kurdistan Democratic Party (KDP) and the Patriotic Union of Kurdistan (PUK), which was led by former Iraqi President Jalal Talabani, to set the referendum date. Although the Kurds have been dreaming of an independent state for generations, many fear the results may be used to cement these two parties’ grip on power for years to come. The first move of the referendum council was to turn itself into the Political Leadership Kurdistan-Iraq, a move that has been rejected by Kurdish parties that had opposed the timing of the vote, as well as part of the PUK and members of the public. This new leadership body has no legal framework and its foundation had not been discussed among political parties, the Kurdistan Parliament, or even the government, and threatens to undermine other democratic institutions.

Background of the Vote
Kurdish civil society organizations in 2005 initiated an independent, non-binding referendum, in which 98 percent of population voted for independence. However, the Kurdish leadership at the time did not use the results to discuss independence with Baghdad, and instead chose economic benefits and political stability over nationalist rhetoric.

The current campaign for independence was led by Barzani, whose presidential term ended in August 2015. He rejected Iraqi, American, and European requests to call off the vote, and asked U.S. Secretary of Defense James Mattis to offer an “alternative” for the referendum if Kurdistan were to postpone it. One was offered by U.K., U.N., and U.S. officials, but it was unanimously dismissed on September 17 during a meeting of the Kurdistan Region Referendum Committee, headed by Barzani. Barzani agreed in principle with the proposal, but saw calling off the plebiscite as a huge setback and embarrassment for a leader with a reputation as someone who can get things done.

Holding the referendum has become a historic achievement for Barzani, who considered cancellation as political suicide in Erbil and Baghdad, where he would be seen as a weak leader. His campaign also centered on his aspiration to expand his hegemony into Turkey, Syria, Iran, and beyond. When the Arab Spring started, Barzani wanted to play a decisive role in the future of the Kurds in Syria, but the Kurdistan Workers’ Party (PKK) stopped him, leading Barzani to strongly oppose PKK achievements and the organization to marginalize his allies in Syria. Barzani is hungry to surpass the reputations of Talabani and PKK founder Abdullah Ocalan, and wants to continue to use the referendum as a bargaining chip to win more benefits from Baghdad, rather than face the domestic failures of which he and his party are accused, amid a severe financial crisis and political gridlock.

Internal Kurdish Political Opposition
Local opposition to the referendum included the Kurdistan Islamic Group (KIG) and the Change Movement (Gorran), which had called it an “illegitimate and partisan decision” with poor timing that did not serve Kurdish independence. Both groups walked back their early opposition at the last minute: The KIG called for voting in favor of independence, and Gorran let its backers decide whether and how to vote. Gorran leaders had believed that a lack of conditions for creating an independent state—a strong economy, national institutions, trust between power and citizens, and national unity—would put an independent Kurdistan under threat. In addition to opposition from the parties, a petition by a group of intellectuals expressed fears of the creation of a “failed state” lacking democracy and human rights and of the lack of international support, particularly from the U.S.

Behind the scenes, Barzani’s KDP and Talabani’s PUK have agreed to continue the independence bid and extend the Kurdish parliament’s term for another two years, postponing presidential elections scheduled for November 2017 so that Barzani and the two parties remain in power. Gorran, the KIG, and other political entities that are largely excluded from politics want to focus on internal political issues, namely elections. Barzani cannot legally stand for the presidency because of term limits, and if the groups opposing the KDP-PUK duopoly agree on joint candidates, they would have a chance at winning power. To these groups, the independence referendum was a distraction from building political institutions. Following the vote, Gorran nominated Hama Tofiq Rahim, a member of the group’s executive board, to run for president, a move which has drawn more popular support for the elections.

The U.S., U.K., and U.N. had urged Barzani to not hold the referendum in Kirkuk. But now that the vote has taken place, they should consider deploying forces and have tougher diplomacy in both Baghdad and Erbil to guarantee that ethnic and military tensions will not lead to bloodshed, as militias from both sides will not be easy to control. Furthermore, conflicts between Kurds and Turkmen or Arabs in Kirkuk could provoke a military response from Iraq, in which a Kurdish defeat is highly probable because of the likelihood of being outgunned. This will also undermine the ongoing war against the Islamic State and efforts to return order and stability to the region.

Regional Alignments and International Reaction
Since 1991, the U.S. has been behind the successes of the Kurdistan Region of Iraq, providing it with protection, funds, aiding, and training, as well as political support in Baghdad. But before the referendum, Kurdish leadership had already started approaching Russia amid U.S. concerns over the vote. If the U.S. fails to bring together Erbil and Baghdad, Kurdish leaders are likely to continue to seek help from Russia, believing it could better deter Turkey and Iran, which have been brought closer by the referendum. Kurdish leadership is also looking to Russian energy investment in Iraqi Kurdistan to finance its future budget: Russian oil company Rosneft is building a gas pipeline to deliver the region’s gas to the international market.

Turkey and Iran share borders with Kurdistan and fear that their own internal Kurdish opposition parties will be inspired by their Iraqi brethren. Iran also fears that an independent Kurdish state would support Israel and Saudi Arabia to the detriment of Iran’s regional influence. Turkey and Iran’s continued opposition will greatly exacerbate economic problems for landlocked Kurdistan, which currently depends on these countries for imports and for maritime trade to international markets, especially to export oil, the Kurdish government’s main source of revenue. Kurdistan imports 85 percent of food and other goods from Iran and Turkey, and 95 percent of its budget depends on oil exports through Turkey. Turkish sanctions could easily suffocate the Kurdish state, as currently Kurdistan’s only route to sell oil is through pipelines passing through Turkish territory. Such moves would be economically devastating to a region already experiencing a severe financial crisis and hampered with billions of dollars in local and international debt.

Kurdish leadership should be more careful than they were in the pre-referendum era, as future mistakes will not only hamper their efforts for an independent state, but also risk the relative stability and improved standard of living many Kurds have experienced in the past decade. The Kurdish dream for independence will always remain alive, so Kurdish leaders should not further step toward independence without the U.S. support and in agreement with the Iraqi government and regional countries, particularly Turkey. Any unilateral move will be suicidal.

Policy Implications
Although international opposition angered Barzani and the KDP leadership, it has also given leverage to Gorran, the KIG, a faction of the PUK, and others who opposed the referendum. Although the U.S., E.U., U.K., and U.N think that the Kurdish leadership put its interests and gains against the Islamic State at risk, they should not hesitate, despite their 26-year support for the Kurds and the KRG, to further pressure the Kurdish leadership to start negotiations and dialogue with Baghdad. The Kurdish people are the most pro-western in the region. Abandoning them in these difficult times would not be wise, and the Kurds should not become victims of their leadership. The fate of Kurdistan—a region in which the U.S. has done much to help and build hope—is uncertain, but it is possible to build a better and more democratic future.

Meanwhile, the international community should reiterate their calls for holding elections on time and resuming the political process. While it is understandable that existing officeholders stayed in office past their terms amid the war against the Islamic State, democratization and reforms are existentially connected to the parliamentary and presidential elections in November 2017. The referendum may well destabilize the region; however, there is also a high possibility that postponing the elections will lead the region into chaos and instability. To save the Kurdistan region and Iraq from turmoil, the U.S., E.U., and U.N. should support fair elections being held on time, which may lead to changing Kurdish dynamics that will help Baghdad-Erbil negotiations become even more successful.