Three years after the Maspero massacre, the voices of the dead can be heard with one demand: justice. In the early days of the Egyptian Revolution, we witnessed Christians protecting Muslims during prayer times and the latter returning the courtesy. A mere seven months later, the dream of a united Egypt had turned into a never-ending nightmare of religious tensions. By the time the sun rose on October 10, 2011, nearly 30 Egyptians, mostly Coptic Christians, were dead and almost 300 were injured. What occurred on that bloody evening was nothing short of a head-on clash between an angered religious minority and the Egyptian army. There is substantial video evidence (please note: the images in the video may be disturbing to some), which shows a badly organized, shoddily trained Egyptian army attacking demonstrators with batons, guns, and armored personnel carriers (APCs).

The images that emerged from the now-infamous Maspero massacre are etched in the psyche of modern Egypt. Yet, three years later, the plight of Egypt’s approximately 15 million Coptic Christians has arguably worsened. In fact, while the previous Islamist regime was correctly criticized for its highly sectarian narrative, the current regime is equally guilty, despite its secular veneer.

The massacre occurred while an estimated 10,000 Egyptians were peacefully protesting the burning of a Coptic church in Upper Egypt. Videos of the massacre clearly show an angry, but peaceful, march. At the time, it seemed reasonable to expect that, in post-revolutionary Egypt, peaceful dissent would not be met with bullets and APCs. That expectation proved to be tragically false.

No one can say with certainty if it was a planned confrontation or not. However, there is little doubt that the massacre was part of a counter-revolution sought to silence dissent – Coptic or otherwise. The night of massacre, Rasha Magdy, a news announcer on the state-owned TV channel, framed the massacre as the Egyptian Army versus dark, unknown forces. She stated: “Copts had put Egyptian soldiers in peril,” To further calm matters, she called on “all honorable citizens” to assist the army. It was not the army that was under attack, but the Christian minority. In response, working class Egyptians from nearby Bulaq made their way towards the scene, in large part due to the television propaganda. Among the dead was a body that had its “head split in two.”

The night of the massacre, the announcer used the technique of “divide and conquer,” to pit the Coptic Christians against the Egyptian people, symbolized by the army. Employing sectarian rhetoric became all-too-common among counter revolutionary forces.

By the time the massacre was over, Egypt had witnessed the single bloodiest day since the Revolution, made all the more tragic by the systematic denials issued by the army in the days to come. When faced with videos showing soldiers atop APCs firing on demonstrators and, in numerous cases, intentionally running them over, the army offered one excuse after another. Generals explained away the running over of demonstrators by soldiers as acts of “panic.” But those generals neglected to mention the fact that this occurred repeatedly, not in response to a single event. 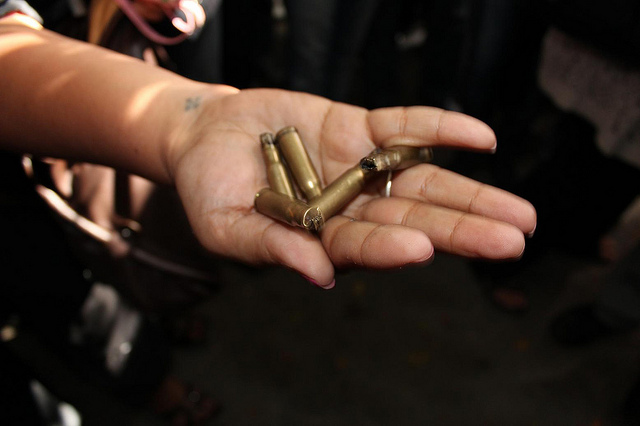 There was also the question of live bullets, where yet again, the state, as it had in previous confrontations with protestors, denied its use of live bullets. An invisible enemy was the coat hanger of blame: “there is no doubt that there are enemies of the revolution.” But try as they might, eyewitnesses in the morgue painted a darker reality. Magda Adly, head of El Nadeem Rehabilitation Centre for Victims of Torture, said “the autopsy reports were written in front of me’’ for eight victims. Of the eight, six were run over by “heavyweight” vehicles and “two received excessive gunshot wounds.” But, unsurprisingly, many Egyptians believed the army’s narrative. After all, it was only months before that, those same people shouted loudly “the army and the people, one hand” in unseating Hosni Mubarak.

Understanding the current state of paralysis requires understanding sectarian relations in Egypt. The day following the massacre, a Christian caller told Nile Television that Egypt “is supposed to be neither Muslim nor Christian.” That this fact even needed to be stated attests to the extent of the problem that Egypt faced then, and that it continues to face. Analysts and observers largely agree that structural problems between the two religions continue to exist.

Sectarian relations in modern Egypt have consistently been a thorny issue. While many individual Muslims and Christians have always enjoyed cordial interactions and authentic friendships, Egypt has, nonetheless, suffered from flares of sectarian-based tension and periodic violence. More often than not, these tensions involve land squabbles, forced migration of Christian families, or inter-marriage, which remains frowned upon by both religions.

Tensions often take the form of attacks on churches, which include church burnings, drive by shootings, or bombings. The very notion of building a new church has, on many occasions, resulted in clashes leading to loss of life. Many Copts feel like they are second-class citizens, and that they are being persecuted for their religion. After the infamous bombing of a Coptic Church in Alexandria on New Year’s Eve 2010, a parishioner, with punishing precision, encapsulated the sentiment of many, stating: “If this happened in a mosque, the government would be doing something…but this happens to us every year, and every day, and they do nothing.’’

These tensions are not individual incidents (not simply due to a small number of agitators) rather, sectarian divisions are structural in nature, making them more deeply embedded than many realize. A major issue is the absence of Christians in prominent positions in the army. This absence has long been a highly sensitive subject because it involves what is arguably an even more sacrosanct organization than Al-Azhar or the Coptic Church: the Egyptian Army. The sheer absence of Christians is similarly noticeable in prominent positions in the Ministry of Interior, the Ministry of Foreign Affairs, and the many hallways of the Egyptian state.

Even more troubling than the absence of Christians in the upper echelons of the military and government is the dual legal system in Egypt – one set of rules governs Muslims and another their Christian brethren. Even when positive change is made, such as the election of the first Coptic woman – Dr. Hala Shukrallah – to lead a major political party like Al Dostour, it only serves to point out the glaring and systematic political inequality. The fact that Dr. Shukrallah is Christian would never matter were the Egyptian political landscape an even playing field. But, the reality rearing its ugly ahead is: Shukrallah’s election did matter because it is a rarity—in the same fashion as the election of Barack Obama as the first African American president. In the Egyptian sphere, how can the state speak of unity at every turn, when there are two sets of political and security laws, one for Muslims and another for Christians?

It is against this backdrop that the Maspero massacre unfolded. But what has come of this tragedy? Were the guilty soldiers punished? Have the structural issues been addressed? The answer is simply: No. The stark reality is this: nearly 10,000 Christians marched for their rights on that “bloody Sunday” and many made the ultimate sacrifice. Now, three years later, no one has faced punishment.

The sectarian tragedy played out, in even clearer terms, during former President Mohammed Morsi’s tenure, escalating to a point where the largest Coptic Cathedral, in Abassiyia, was attacked. After Morsi’s ouster those attacks reached a never-seen crescendo, with 64 churches “torched and vandalized to the level of complete destruction” as recently wrote Zeinobia, one of Egypt’s best-known bloggers.

The Church has continued to sing the praises of current President Abdel Fattah al-Sisi’s regime, although it has done little to renovate these churches despite its countless promises. The Egyptian Commission for Rights and Freedoms found recently that as of August 2014 only 10% of the destroyed churches had been reconstructed. Issues of kidnappings continue to be an issue for Copts as well with one such case—a woman who later returned—devolving into a full-fledged assault by Egyptian security forces on the Christian population of the village of Gabl El Teir. The tank of promised change is languishing in the sands of the status quo.

In a world of few certainties this much is true about the Maspero massacre: more Christians were arrested in its aftermath than were soldiers who murdered them on that night. But, whereas, Pope Tawadros was an outspoken critic of former president Morsi, the church espouses a highly conciliatory stance with Sisi. History shouts, it does not whisper: change comes to those who seek it and are willing to pay the price. A minority has been implicitly told in unwavering tones by the state to maintain conciliatory silence.

Silent are the dead of Maspero and silent are Egyptians, of all stripes, 36 months to the day after the Maspero massacre.