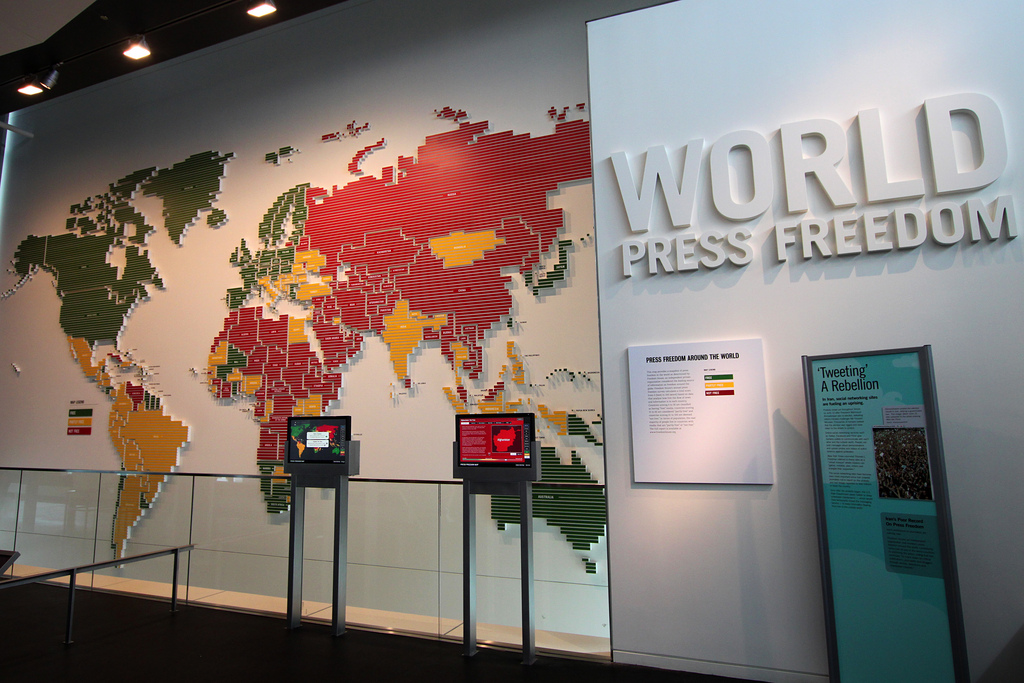 Immediately following Morsi’s ouster, authorities shut down private television channels accused of supporting the Muslim Brotherhood, and these have not returned to date. The military pointed to the inflammatory rhetoric on these channels as the impetus for the shutdowns, yet similar practices were carried out by other private channels that have been allowed to continue broadcasting. This preference shows that the restriction had strong elements of political motivation, further demonstrated by the disproportional crackdown on Qatari Al Jazeera and its reporters, five of whom are in still custody pending investigations and trial.

The drafting of a new constitution at the end of last year provided the country with an opportunity to initiate reform that adequately protected journalists and ameliorated the steady decline of state and private media in the country. Successive regimes have lacked initiative in providing reliable frameworks for protecting journalists and have avoided fostering an integrity that most of the Egyptian media has lacked. While Morsi resorted to constantly antagonizing the Egyptian media as a defense mechanism during times of domestic turmoil, the current post-July 3 government has conducted a media crackdown that has been more intense than that of the last three years. The government has resorted to increasing hostility against foreign media whose journalists continue to work in an environment of distrust or outright danger as a result.

The 2014 constitution provides some marginal improvements when it comes to the freedom of the press, while making way for enough ambiguity and stipulations under the law to render any assessments of gains in the document inconclusive.

Article 70 of the 2014 constitution and Article 48 of the 2012 constitution, which both deal with the press, explicitly state that its freedom is “guaranteed.” While the 2012 constitution allowed for court orders to shut down publications, the stipulation is left out of the new version, which only states that censoring, confiscating, suspending, or shutting down a newspaper is permissible “in time of war or general mobilization,” according to Article 71.

Article 71 also prohibits detention for crimes relating to publishing. “Punishment for crimes connected with incitement to violence or discrimination amongst citizens, or expunging the honor of individuals are specified by law.” This aspect of the new constitution provides important protection for publishing-related charges. However the article still leaves room for charges including incitement (a vague and often politically motivated charge) to result in the imprisonment of journalists or publishers. This part of the constitution also delegates penalties for such crimes to the law, opening them up to judicial discretion.

Article 211 establishes a National Media Council that “regulates the affairs of radio, television, and printed and digital press, among others.” The constitution states that this council is responsible for safeguarding press freedoms and monitoring legality of the country’s press institutions. While the article stresses the National Media Council’s neutrality, it goes on to indicate that the law determines the composition of the council, its system of operation, and stipulates the conditions of staff employment. Without providing the framework in which this council is formed or even the specifics of how it operates, the constitution already compromises its independence. Furthermore, this body is given a list of responsibilities, such as “preventing monopolistic practices” and “ensuring controls and regulations” to guarantee ethical standards, but there are no specifications regarding how it is expected to carry out its duties; it is given no authority aside from being “consulted on bills and regulations related to its field of operation.”

The following two articles, which describe the National Press Association and National Media Association, face the same problems. The two associations are tasked with managing state-owned press and media ensuring “their development, independence, neutrality and their adherence to sensible professional, administrative and economic standards.” Articles 212 and 213 are much more extensive than predecessor Article 216 in the 2012 constitution, but still leave the composition, system of operation, and conditions of employment “specified by law,” jeopardizing the independence they are tasked with upholding.

The Committee of 50 that drafted the amended constitution has championed Article 204, which it says greatly limits the situations in which civilians can be tried before military tribunals. In reality, the listed situations are so numerous and so vague that military courts will continue to have extended jurisdiction over civilians, including journalists. Among the cases in which civilians can be subject to military trials are assaults against documents, military secrets, and public funds.

Last November Sinai-based journalist Mohamed Sabry was given a suspended sentence, charged with “entering a prohibited military zone and filming a military facility.” A month earlier Ahmed Abu Deraa was also handed down a sentence and was charged with “intentionally spreading false information about the military.”

Both cases under the new constitution would still likely result in military trials.

The political situation outside of these articles also jeopardizes the work of journalists and the press as a whole. Al Jazeera English journalists Mohamed Fahmy, Peter Greste, and Baher Mohamed currently face a number of allegations including joining a terrorist organization, publishing false news harming national security, terrorizing people and harming the people’s general benefit, and possessing broadcast equipment without a license.

The classification of the Muslim Brotherhood as a terrorist organization and the accusations levied against the journalists send a clear message that communicating with Brotherhood members or portraying the country in a light that the government does not find favorable are offenses that could lead to jail time. The articles protecting the press in the constitution are not likely to prevent similar cases from occurring in the future and are encouraged by a judiciary that over the past three years has not demonstrated remarkable levels of independence.

Unfortunately the new constitution does not do much to bar the sort of media crackdown that Egypt has seen after 3 July. As it has failed to enshrine true institutional independence, the conditions of Egypt’s unfree press are sure to persist.