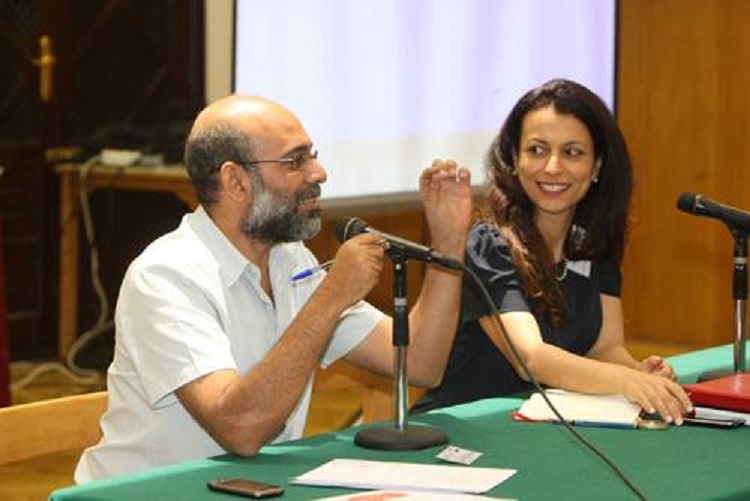 TIMEP Board Member Nagla Rizk with Ali Shaath at the workshop "Towards an Open Source Strategy for Egypt," May 2011. Photo Courtesy of Nagla Rizk.

On December 4, 2013, as the Tahrir Institute for Middle East Policy was screening the film Rags and Tatters, produced with the help of the Arab Digital Expression Foundation (ADEF), those in the audience received the very sad news.

Egypt had lost one of its brightest and most loved activists, Ali Shaath. The co-founder of the same ADEF that worked on Rags and Tatters, Ali was known for his intelligence and tireless spirit. He was active on many fronts, devoting his time to facilitating freedom of expression, digital freedom, cultural exchange, and the use of technology in democratic development.

TIMEP Board Member Nagla Rizk, Professor of economics at American University in Cairo and an activist for the “Access to Knowledge” movement, worked closely with Ali on issues related to democratic participation in digital and cultural knowledge production. She reflected, “I thought a lot of his time went to what my team and I [were] working on. But I found out at his memorial that just practically everyone felt this way.”

One of Ali’s most influential projects was the ADEF, which he established with his partner, Ranwa Yehia. At the foundation, and the corollary Arab Digital Expression Camps, Ali provided a home for those from all across the Arab world to collaborate and have a platform to innovate with media, art, and sustainable technology.

Regarding her dear friend’s initiative and vision, Rizk remembered, “he was not just a dreamer…he was a dreamer who made things happen. His energy, his vision, his spirit are just unbelievable.” For those who knew Ali, and for the many who never knew him but who have interacted with him through his work and those he inspired, Ali lives on through his spirit.

TIMEP Board Member, Ghada Shahbender, a lawyer and human rights activist, described this phenomenon. “I was in Washington D.C. presenting “Rags and Tatters,” the movie, for [TIMEP] when I heard of Ali’s sudden departure,” Ghada said. “I walked into the darkened movie theater during the screening and the first thing I saw was the credit to ADEF and Ali Shaath.”

“I still run into Ali Shaath all the time. His work is all around us.”