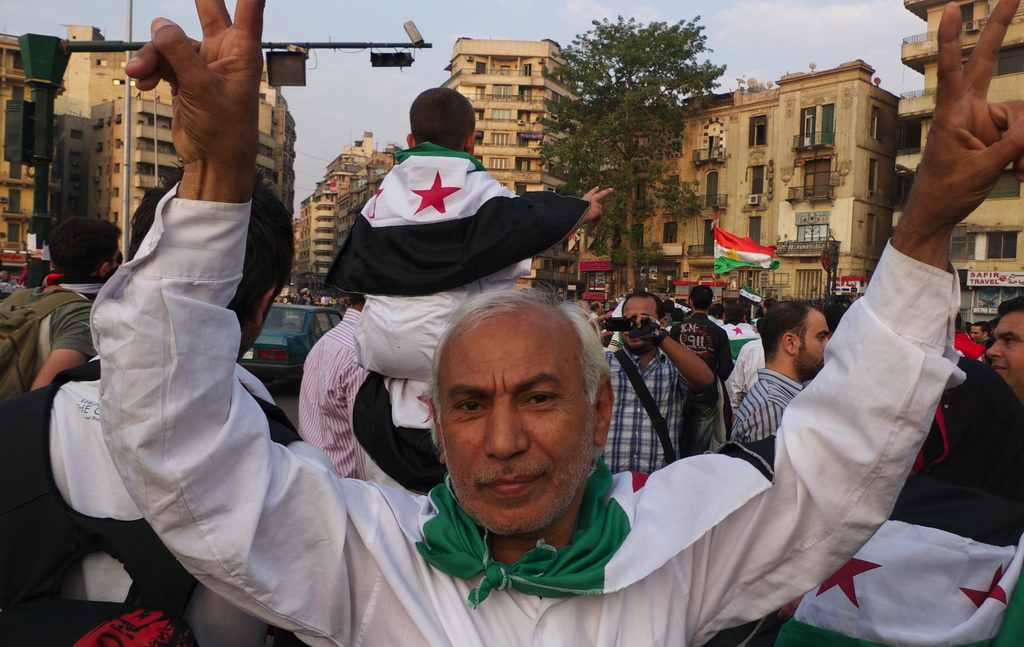 Since 2011, more than 3 million refugees have fled Syria, creating a dire human rights situation. Approximately 300,000 Syrians are in Egypt, of whom the United Nations High Commissioner for Refugees (UNHCR) has registered roughly 125,000 as refugees, while thousands have been detained as they attempted to leave the northern coast by boat en route to Europe.

Throughout the year, the authorities “detained over 1,500 refugees from Syria, including at least 400 Palestinians and 250 children as young as two months old for weeks and sometimes months,” Human Rights Watch reported last November. More than 1,200 of those detained were forced to depart, either to alternative host countries (such as Turkey and Lebanon) or back to their countries of origin.

Media coverage, which depicted babies, women, and children crammed into dank police stations, brought on a wave of bad press that the authorities are not likely to forget. The dire situation also motivated the creation of the Refugee Solidarity Movement (RSM), a network of activists, lawyers, and non-governmental organizations (NGOs) based in Alexandria. RSM documents detentions and deportations, makes visits to police stations, and coordinates the distribution of food and medical supplies to refugees being detained.

Plenty has been written about why refugees decide to journey from the North African coast to Europe. The main reasons include: increasing xenophobia (demonstrably on the rise in Lebanon); dwindling resources for assistance programs provided by UNHCR or local NGOs; and the fact that refugees fleeing conflicts (e.g., Gaza, Sudan or Syria) are often looking for a place to settle where there are better employment, education, and life prospects – somewhere like Europe.

Far less is known about the smuggling networks and weeklong journeys by sea that often end in tragedy. At least 3,000 people are thought to have died at sea this year, although a recent report by the International Organization for Migration (IOM) suggests that the number could be higher.

Horror stories from the Mediterranean are not hard to find, particularly after smugglers deliberately sank a boat from Egypt’s northern coast near the coast of Malta on September 10, 2014. Families in Egypt, Gaza, and Syria are still looking for bodies – and answers – to understand what actually happened to their relatives.

If refugees are caught – whether by police or naval and coastguard patrols– they are brought into an informal network of police stations and detention facilities that line the northern coast of Egypt. According to researchers from the Egyptian Initiative for Personal Rights (EIPR) in Alexandria, some 7,400 refugees have been detained on the north coast since the beginning of 2013, with roughly 4,500 detained in 2014. Here too, there are risks.

There is no single process for dealing with migrants. Refugees may be treated in wildly different ways based on their nationality, present circumstances in Egypt, the time of year that they are apprehended, or the security officers in charge of their case.

Heba Atallah Mansour, an activist with the RSM, says that while new police stations have been added as detention centers, they are not facilities capable of holding large numbers of migrants in humane conditions. “This story has been going on for over a year and they have not found a substitute yet. Why? How come? They have been dealing with this for 16 months now,” Mansour said.

“The Egyptian government has a responsibility to detain these people in a decent place, not police stations,” she added. “They are not criminals, in the end.”

Anfoushy: An Experiment in Detention

There will be breakfast, lunch, and dinner as long as you are here,” he said during a speech in front of the refugees and police officers. “Yes, you made a mistake, but on the humanitarian and moral level, you are our guests…we are not here to punish you over the mistake you have made.”

Anfoushy was by no means a specialized facility of the type that Europe has constructed, whose sole purpose is to absorb refugee populations moving across its borders. Instead, it was an improvised solution that aimed to provide better conditions than those in the informal network of police stations used across the northern coast. However, Anfoushy was essentially an underground gymnasium, one subject to the same opaque legal system as a police station.

“It’s better than police stations, but still, it’s the same system,” said Muhammad Khashef, who monitors detentions for the EIPR in Alexandria. “They arrest people and instead of detaining them at a police station, they put them in the youth center. In terms of processing, everything is the same as it was with State Security or the Ministry of Interior…nothing changed.”

Others are less concerned about the current conditions than what the future holds, including one Palestinian-Syrian man currently detained in Karmouz police station, who said: “The conditions in Karmouz are not that bad. At least it’s better than Syria.”

But, he added, “the people who [have not been] deported to Turkey fear going back to Syria, because death will be waiting for them there.” Administrative detention and deportation are apparently their biggest concern.

Anfoushy was closed in early November. Everyone still in detention, and any future detainees apprehended this year, will be taken to police stations. Anfoushy was an experiment – one that clearly failed. There is still no specialized infrastructure to deal with the unprecedented numbers of migrants passing through the country, or a uniform set of policies to protect the rights of those in detention. Neither is there a clear process to deal with the tens of thousands of refugees who will start leaving the coast in earnest again after the winter. And so, Egypt’s detention policy is back to operating on an ad hoc basis.

A uniform system of detention would mean that those apprehended could stay in humane, comfortable conditions while their cases were processed – without requiring extended periods in detention or having deportation decisions subject to changes in domestic politics, the whims of the security apparatus, or migration flows.

Mohamed Saeed, a lawyer with the Cairo Institute for Human Rights (CIHR), states that there is little legal justification for punishing those attempting to leave Egypt. Until a proper legal code, which respects both existing Egyptian legislation and the rights of those detained, is created, the mess of deportations, bureaucracy, and rights violations will continue.

Before the opening of the Anfoushy detention facility in mid-September, 367 refugees of different nationalities had been deported to alternative host countries or back to their countries of origin this year, according to figures provided by EIPR.

At least 300 refugees, including 83 from Sudan and the Comoros Islands, have been deported since then. That number is likely to increase further, after a boat carrying 104 Syrians and Palestinian-Syrians leaving Turkey was apprehended in Egyptian waters over three weeks ago.

The remaining detainees are now in Karmouz police station in Alexandria, once again facing an uncertain fate in Egyptian custody. Syrians with valid papers were recently returned to Turkey. Syrians without papers and Palestinian-Syrians are under threat from imminent deportation orders – some, to Syria. The situation of the 56 remaining Palestinian-Syrians is even worse, as they have no third country to which they can feasibly travel.

“The National Security Department within the Ministry of Interior has issued deportation orders against at least 64 of the refugees – who could be deported at any time – even though the Public Prosecutor office in Alexandria ordered their release,” said Amnesty International in a statement on Friday November 14, 2014.

Egypt is not alone in its struggle to meet the needs of refugees in its borders. European nations are scrambling to address unprecedented migration across the Mediterranean – or choosing not to address it, in the case of the United Kingdom. Immigration Secretary James Brokenshire recently stated that emergency rescue operations in the Mediterranean should be “stopped at the earliest possible opportunity,” because they had supposedly encouraged more and more people to attempt sea crossings.

Brokenshire’s statements are not unique. Recently, there has been a marked shift away from humanitarian efforts in favor of increased border control and regulation. This shift is typified by the European Union border agency Frontex’s Operation Triton, a scaled-down, and arguably securitized, version of Italy’s celebrated Mare Nostrum (which has saved tens of thousands of lives since last year) and the land-based Operation Mos Maiorum, spearheaded by Frontex and the Italian authorities. These two Operations have seen European police forces move to “apprehend irregular migrants” for intelligence-gathering and investigative purposes, “identify, prosecute and disrupt organized crime groups” and, significantly, “achieve an impact on illegal immigration,” according to a leaked document published by Statewatch.

On both sides of the Mediterranean, refugees are now facing systems that prioritize security at the expense of humanitarian needs. Securitization and border control have begun to take precedence over rescuing refugees at sea, providing them with legal routes to Europe, and protecting their rights in host countries.

However, with small, meaningful reforms, Egypt could begin to truly treat its guests the way it purports to – as human beings, not criminals.