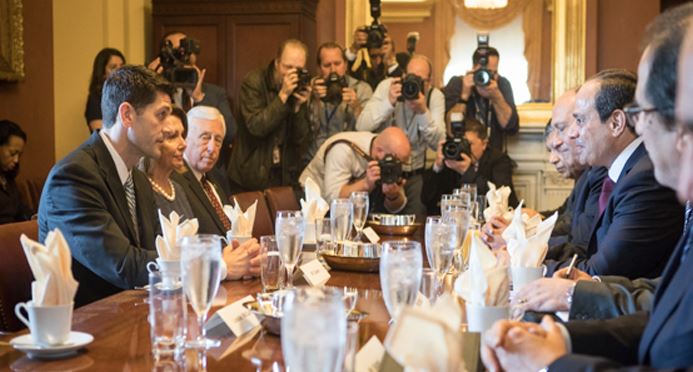 Speaker of the U.S. House of Representatives Paul Ryan meets with Egyptian President Abdel-Fattah El Sisi in Washington in April (photo via the U.S. embassy in Cairo).

On December 21, Congress passed a continuing resolution to fund the government through January 19, 2018, avoiding a partial government shutdown set to begin at midnight the next day. As high-level budget negotiations on Capitol Hill stall over issues such as Deferred Action for Childhood Arrivals and the Children’s Health Insurance Program, one would assume there is still time to advocate for realistic and feasible adjustments to Egypt’s aid package within the State and Foreign Operations budget. But the clearest and most feasible change at this point in the process seems to be a higher percentage of Egypt’s Foreign Military Financing (FMF) contingent upon democracy and human rights conditions.

As of now, both the Senate and the House have passed their fiscal year 2018 State, Foreign Operations, and Related Programming Bills (SFOPS).  The Senate has Egypt’s Economic Support Funds (ESF) and FMF at $1 billion and $75 million respectively, with 25 percent withholding for democracy and human rights conditions. The House has allocated $150 million to ESF and maintained Egypt’s FMF allocation of $1.3 billion, while excluding democracy and human rights conditions altogether. As the figure below illustrates, the House’s numbers align a bit more closely with the president’s budget, which was released before the administration elected to withhold or reprogram about $290 million in aid in August of this year.

While Egypt language in the 2018 omnibus is more or less finalized at this point, SFOPS staff on Capitol Hill have not reached a conclusion on numerical allocations, with some staff some speculating that FMF could tally somewhere between the Senate’s $1 billion and the House’s $1.3 billion. The ESF picture is a bit more obscure, as the House has opted for a number higher than the FY17 compromise of $112 million (in chart above) despite Senate and Executive alignment on $75 million. Given that the members on the House side run the gamut of overt support to strong criticism of Egypt’s current aid package, and the Senate’s increasingly cohesive bipartisan disappointment with it, it is unlikely that a decision on either figure will be hassle-free. Moreover, neither side has received 302(b) allocations, which issue the bottom line for the whole of SFOPS accounts, meaning there are a lot of unknowns from both process and political standpoints. Even if the numbers are potentially set to be cut, a final figure is unclear.

From a process perspective, the language practically being inked means that the content of the democracy and human rights conditions is a done deal. Campaigns seeking to take advantage of an omnibus with an unknown arrival date and pushing for these conditions to explicitly mention the NGO Law or the continuation of the NGO trial, for example, have likely run out of time (based on the assumption that these issues are not part of the conditions as they stand at this point). Politically, the Donald Trump administration’s withholding and reprogramming adjustment over the summer, purported to be the result of its concern with human rights (although the rationale, and conditions set between the Trump and Abdel-Fattah El Sisi administrations likely includes concerns over North Korea, and a desire to cut foreign assistance across the board), has put human rights concerns at the forefront, regardless of how genuine that rationale was. This may explain why one staffer at the House, which has left democracy and human rights conditions out of its last two SFOPS budgets, noted the need to see progress on the NGO Law (along with Egypt’s North Korea relations) in considering Egypt’s 2018 package ESF and FMF levels.

On the Senate side, democracy and human rights issues have increasingly become a bipartisan sticking point with respect to Egypt’s aid package. An April 2017 hearing on assistance to Egypt from the United States unveiled bipartisan agreement among members of the Senate SFOPS subcommittee that Egypt’s FMF package could be better tailored to its security challenges, particularly the insurgency that the military continues to fight in North Sinai. Other members expressed concern over the wide range of human rights violations committed by the Egyptian armed forces and a crackdown on civil society that may be fueling extremism rather than curbing it. One month later, the Senate flexed its critical and influential might in the FY17 omnibus, which included provisions aligning with the Senate’s Cooperation Determination Clause in its FY17 appropriations bill to reprogram locked up ESF funds to other countries (noted in Committee Report on SFOPS portion of the omnibus), a reduction of ESF, and democracy and human rights conditions on military aid, all of which differed from both the president and the House’s budgets. It is possible then that the Trump administration’s aid adjustments in August paved the way for the Senate to double down in its FY18 SFOPS bill by reducing FMF to $1 billion and raising democracy and human rights conditions.

With numerical allocations expected to be hotly debated, the language of the conditions themselves finalized, and human rights becoming an increasingly pan-congressional and executive concern, it seems that the most feasible adjustment still possible at this point is to raise the percentage of FMF that is conditional upon democracy and human rights conditions. SFOPS staff and the State Department have voiced support for this measure, while House SFOPS staff are receptive. But Egypt’s economic and security crises require a different approach; even if its government is uncooperative and inflaming them, there are still ways to make more impactful adjustments to Egypt’s aid package.

Egypt is currently experiencing economic hardship and increased security threats, two crises that civil society organizations are not permitted to address through providing institutional channels for dissent and valuable human development initiatives. Terror trend lines are on the rise, with the two most recent mass attacks in the Western Desert and North Sinai claiming the lives of at least 16 security personnel and over 300 civilians, respectively. Preliminary data from our Egypt Security Watch project shows the monthly rate of terror attacks climbing through Sisi’s time in power from 31 in 2013 to 67 in 2016. Although this monthly rate has fallen to just over 30 in 2017, civilian casualties have jumped from 158 in 2016 to over 470 in 2017, indicating more advanced coordination and efficiency by militant groups.

ESF and FMF are valuable tools that can be used to address these crises and both American and Egyptian interests. But the Egyptian government’s aversion to working with implementing partners of ESF, which has been exacerbated by the new NGO Law, and the intransigence with which it has prioritized prestige equipment in its use of FMF have rendered both of these tools ineffective. Raising the percentage of democracy and human rights conditions on FMF or reducing the FMF and ESF allocations themselves may yield a change in Egypt’s behavior in line with U.S. expectations of a “good ally,” but if the U.S.  assistance package is truly meant to address Egypt’s economic and security crises in the interest of U.S. national security, then democracy and human rights language must explicitly specify the NGO Law and the continuation of the trial of NGO workers. On FMF, the Barack Obama administration’s introduction of four categories (counterterrorism, border security, Sinai security, and maritime security) have hindered Egypt’s ability to be able to procure items such as M1A1 Abrams tanks through U.S. military aid. But additional focus is now needed by the U.S. to ensure that apt equipment and training geared toward optics, communications, intelligence, and surveillance is prioritized in the interest of effectively responding to the nonconventional threat the Egyptian military faces.

Democracy and human rights conditions are critical to Egypt’s ability to address both the causes and symptoms of the terrorist threat it is currently facing. Raising those conditions in their current form from 15 percent to 25 percent still fails to get to the heart of the issue, rendering them as little more than an important accessory to the substantive reorientation of the American approach to Egypt’s aid package—and no such reorientation is likely in this bill.