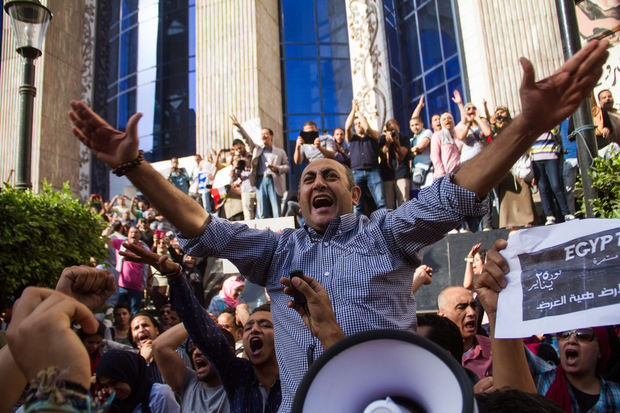 On April 15, the unquestioned support enjoyed by President Abdel-Fattah El Sisi seemed to be harshly challenged for the first time since he took power in July 2013. The Sisi government’s decision to “give back” two tiny but strategic Red Sea islands to the Kingdom of Saudi Arabia upon the visit of the Saudi king to Cairo triggered unprecedented frustration from the general public, including from Sisi supporters. The anger has intensified following Sisi’s request for Egyptians “not to open the issue of the islands anymore,” warning that failure to comply with this could lead to the imposition of measures limiting social media. The broadcast of the live, often disconcerting speech ended suddenly after a member of the Egyptian parliament asked the president to comment, before the latter got frustrated and told him to be quiet.

Against this backdrop, thousands of Egyptians took to the streets on April 15, challenging police warnings against protesting without permission and standing against the media who launched a defamatory campaign a few hours before the “Friday of the Land” demonstrations took place. Demonstrators not only expressed their anger against the decision to abandon the islands to Saudi Arabia but they also called on the president to leave office. The day passed peacefully, with only a few reported minor injuries. Several hundred protesters were detained; though most were released within 24 hours, about 100 face charges and about 20 remain in custody. What does this mean for Sisi’s regime in Egypt? And does it lead, in principle, to another, third revolution since January 2011?

Effects of a New Mobilization

The first and the most important effect of the uproar is that the coming days will be tough for Sisi and his ruling network. His popularity is in decline and he will have to find reasonable answers to very tough questions coming from both his supporters and his opponents. Public frustration is mounting, and—as political platforms in Egypt are nationalistic and strongly influenced by the security services—people will express their anger by taking to the streets.

Second, Sisi’s regime will continue to close its eyes to the realities of its domestic, regional, and international contexts. Domestically, Sisi seems to be ignoring the real causes of the increasing anger, preferring to blame external conspiracies and internal plots against Egypt. Regionally, Egypt’s role has been diminishing in relation to that of other regional powers such as Saudi Arabia and Turkey, not to mention Israel. Sisi’s strategy of waging a proxy war on terrorism on behalf of international players is not operating or unfolding as he wishes. Moreover, with the increasing criticism of his human rights violation record, Sisi is facing a tough time with members of the European Union. Italy has recalled its ambassador, criticizing the Egyptian authorities for not cooperating in investigating the disappearance and then murder of Cambridge University student, Giulio Regeni. The European Parliament recommended member states impose sanctions on Egypt for failure to cooperate in the Regeni matter.

The “Friday of the Land” demonstrations breathed new life into the non-Islamist mobilization in Egypt. Since July 2013, when the military removed President Muhammad Morsi from office, Islamists had been the main force demonstrating against the Sisi regime. Other non-Islamist political forces had been broken up, were unorganized, and could not take to the streets in large numbers—at least until April 15. Non-Islamist forces now seem much more organized and fearless toward the security services, raising ambitious political slogans asking Sisi to leave power, and accusing him of selling the two Red Sea islands. The demonstrators also managed to end the day relatively unscathed and asked Egyptians to take to the streets again on April 25 to celebrate the 34th anniversary of the Sinai liberation. The day—a national holiday—has strong connections with the two islands returned to the Saudis, as they belonged to the South Sinai Governorate before being abandoned by the Egyptian authorities.

Fourth, the possibility of the Egyptian army playing a role in the near future is increasing. In Sisi’s aforementioned speech and while he was asking Egyptians not to open the issue of the islands any more, the camera captured Minister of Defense General Sedki Sobhi with an angry face. Of course, one should not draw definite conclusions from the body language of the senior officer of the Egyptian military, as it could simply have been an unintended reaction. However, a few days later, a report came out from Stratfor, claiming the Supreme Council of the Armed Forces advised Sisi not to transfer the islands, which it said “could harm national pride and upset the public.” In the same speech, Sisi emphasized that “the army should not move as long as Egyptians are with you [the president] or if they are silent.” This was a clear and direct message from the president to the army that they should not take any action since Egyptians are with him or are at least silent. In all scenarios, the Egyptian army from now on may play a more influential role if Sisi cannot enhance his popularity and control over Egyptians.

If the narrative that “Sisi sold the islands” continues to spread widely among the general public, it will work against the army’s belief in being “the guardians of Egyptian lands”—a situation that the army will never accept or forgive! On April 21, while attending a military even in Cairo, the minister of defense called on Egyptians to “come to one word which prioritize the state’s interest over any other personal interest or consideration.” A similar statement was made in 2013 by the defense minister about the president—except that in 2013, the president was Muhammad Morsi, and the defense minister was Sisi.

What is coming next for Egypt?

Sisi still enjoys the support of the main state institutions, media outlets, and the public. He is also still getting support from his main Arab Gulf allies, the United Arab Emirates and Saudi Arabia. In addition, Sisi is engaging in subtle maneuvering regarding the security situation with Europe by continuing to warn them how they will struggle if Egypt collapses with its 90 million inhabitants. The “Friday of the Land,” however, is only the first step toward another cycle of change in Egypt. There is another scenario about to be played out; it all depends on how Sisi moves on issues in the coming few months. If Sisi continues his stubborn approach toward the two islands and if further harsh security measures are taken against opponents, along with economic hardships, his grip on power might be loosened. The more Sisi feels his legitimacy is challenged and his relations with the E.U. and U.S. deteriorate, the harsher he will be against his opponents. But questions remain: Will the mobilization in Egypt continue? Will political forces manage to organize themselves and gain much support from the public, or will they simply lose the momentum? It is true that Sisi remains in control but he may have to relinquish it to the opposition and the army soon, and then unforeseen scenarios may unfold.