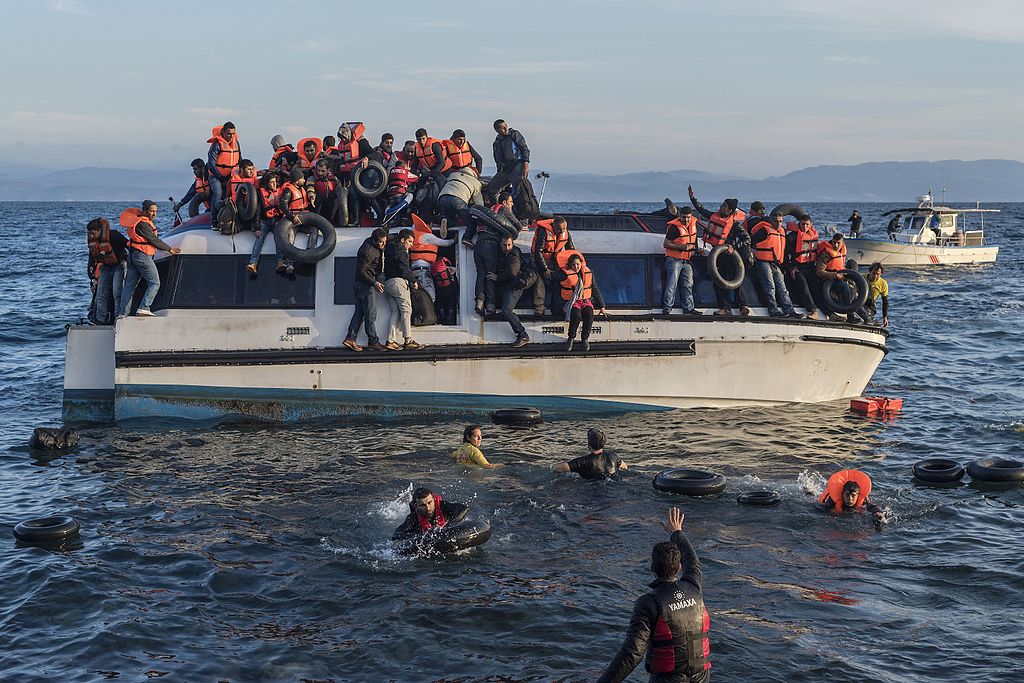 September 21, 2016: A boat has sunk off the coast of Rashid in northern Egypt. Hundreds of people—grieving friends and family, concerned local residents—stand by the water, looking out to sea, waiting for a boat to return with news, or worse. Hundreds are feared dead.

Rarely are migrant tragedies so visible, so documented, so human.

This week marks one month since the Rashid migrant tragedy off Egypt’s Mediterranean coast left hundreds dead or missing.

Egypt is not new to major incidents in the Mediterranean, although they have often taken place far out at sea, away from view. In June, more than 300 people drowned off Crete, some of them refugees and migrants who reportedly first began their journey from Egypt’s north coast. In September 2014, up to 500 people died off the coast of Malta when smugglers deliberately sank a boat that had originally set off from Egypt.

In the wake of the latest incident, the International Organization for Migration (IOM) announced that there were 162 survivors from the Rashid boat: 119 Egyptians, 26 Sudanese, 13 Eritreans, two Somalis, a Syrian, and an Ethiopian.

However, 204 people—among them a four-year-old child—died. The fatalities included at least 92 Egyptians (including minors) as well as 20 “migrants from the Horn of Africa.” These individuals had been identified by their families, according to IOM. For the others, those that were found, there was likely no one in Egypt to give the deceased a name, a story, or an ending.

In many ways, Rashid has been presented first and foremost as an Egyptian tragedy, and has focused attention on the migration of Egyptian nationals toward Europe. The latest figures immediately point to the high number of Egyptian passengers on the Rashid boat, whether survivors or victims. IOM and the United Nations High Commissioner for Refugees (UNHCR) have both warned of the rising numbers of Egyptians travelling to Italy by boat this year, to the extent that Egyptians are ranked as one of the top 10 nationalities arriving in Italy.

Still, the fact that whole Egyptian families travelled on the boat is something either new or, according to migration researchers in Egypt, not seen for years—largely because of a 2007 agreement between Egypt and Italy. The agreement holds that Egyptian migrants (i.e., individuals deemed not to have a valid asylum claim) over 18 years of age can be returned to Egypt.

Human rights campaigners had warned at the time that readmission agreements like this one, a longtime staple of EU migration deals, do not provide applicants due process in asylum claims. But the system has remained. Egyptian newspapers intermittently report on Egyptians arriving to Cairo from Catania (in Sicily) following returns: undramatic news-stubs that speak of a procedure without much novelty or news-value.

Since the agreement came into force, the majority of Egyptians arriving in Italy are minors—usually unaccompanied boys and teenagers—who receive basic services in Italy until they reach adulthood. Migration by minors provided a way around the tenets of the agreement, while still giving young men the opportunity to migrate and families the possibility to send their sons in search of better economic opportunities.

It is therefore notable that whole Egyptian families, as well as adults, are travelling this year: Egyptians like 29-year-old Badr Abdel Hafez, who tragically lost his wife and three daughters in the accident, according to state-run newspaper Al-Ahram.

Is Egypt’s economic crisis and ongoing political crackdown pushing Egyptians toward Europe as would-be asylum seekers rather than economic migrants? Egyptian asylum claims are historically and comparatively quite low. Could that change?

The Rashid boat has raised several questions like these about the current state of Egyptian migration: questions that may not be properly answered as dynamic migration trends in and around Egypt continue to develop and change.

Recent government efforts have been framed in humanitarian language. According to a recent blogpost by one of Egypt’s leading migration officials, the government will “take all preventive measures at all levels to halt the loss of lives of Egyptian citizens and fellow Africans targeted by abusive smugglers.” But those efforts, including a new counter-smuggling law and possibly enhanced cooperation with the EU, will not bear fruit until next year at the earliest.

In the meantime, Rashid has revealed the deadly shortcomings of Egypt’s migration, border, and counter-smuggling policy to date.

The need for proper search-and-rescue

The Egyptian government was quick to defend its role in the rescue operation following news of the Rashid capsizing. However, a growing body of evidence suggests that the Egyptian coastguard and navy were critically slow to respond. Survivors from the boat recounted being left in the water for up to eight hours before any sign of a rescue—despite, some said, SOS calls being made hours before. These reports have even led to claims that the government may have allowed people to die—not least because local residents and family members were communicating with the authorities about the shipwreck for hours. Local fisherman ended up leading the initial rescue efforts.

The incident revealed arguably one of the most problematic aspects of EU externalization of border controls: Egypt and other third countries (namely Libya) do not have proper or sufficient search-and-rescue capacity.

Egypt, for one, does not have a purpose-built search-and-rescue operation on its Mediterranean coast. There are boats that patrol Egyptian waters and security forces that watch out for departing groups on shore, but these operations appear to be more concerned with disrupting departures and apprehending irregular migrants than rescuing those in distress.

Egyptian officials frequently tout the numbers of apprehended migrants as proof that the government is tackling migration. The army’s official spokesperson regularly publishes news of large-scale arrests at sea through his Facebook page—noticeably, much more frequently than in the past. Yet the army reportedly did not get involved in any rescue operation off Rashid until the day after news broke. By then, many of the passengers who could have been rescued were likely dead.

Rashid is actually very close to key naval and coastguard infrastructure, both in Alexandria itself as well as Abu Qir and Rosetta (where families of the missing waited for news on shore). A purpose-built search-and-rescue operation, with faster response times, would have mitigated some of the terrible loss of life off the Beheira coastline.

How to better respond to irregular migration?

Currently, the main response being touted by Egyptian officials to combat flows of migrants from its shores is an anti-smuggling law that was approved by parliament this Monday. The bill now requires a rubber-stamp from President Abdel-Fattah El Sisi who, speaking at the United Nations on September 19, said the law would allow Egypt to better combat irregular migration and emphasized Egypt’s “commitment to supporting efforts in dealing with the migration issue.”

Once passed, the law will criminalize people smuggling (distinct from human trafficking, an existing criminal offense) for the first time in Egyptian law, through life sentences and a string of heavy fines for those found guilty. International NGOs, refugee lawyers, and officials broadly agree that the new law is in line with international legal standards—including the 2000 Protocol against the Smuggling of Migrants by Land, Sea, and Air (part of the Palermo Protocols), which aims to “prevent and combat the smuggling of migrants…while protecting the rights of smuggled migrants.”

However, regardless of the letter of the law, its implementation on the ground is key. There are valid concerns that the law will not end, for example, endemic criminalization of migrants, which can result in protracted administrative or criminal detention, or, for non-Egyptians, coerced deportations to potentially unsafe origin or third countries.

Days after the Rashid tragedy, Egypt announced the arrest of several people smugglers allegedly linked to the boat. However, question marks remain about how much will there is to genuinely crack down on smuggling operations that have worked—often relatively openly—in and around Alexandria since Egypt-Europe migration flows expanded in 2013, or whether the law will more be used as a fig leaf principally for the benefit of the international community and Egypt’s dealings with it.

For sure, tackling mixed migration flows is a complex task that requires addressing “root causes” (which Sisi mentioned at his U.N. speech). These encompass everything from socio-economic deprivation and repression of civil liberties to pull factors available to would-be migrants through social media, instant messaging apps, or the Internet.

In the wake of the Rashid tragedy, Egyptian officials have called on (particularly younger, male) would-be Egyptian migrants to stay and make the best of it at home. “Let’s admit there are job opportunities in the country,” said pro-government television host Ahmed Moussa, pointing to some 200 million Egyptian pounds’ worth of youth projects allocated by the Egyptian president.

These are sentiments expressed by government officials as well. Cabinet spokesman Hossam al-Qaweesh told a CBC channel call-in show that “illegal immigration requires a large sum of money, and I see that with that sum any citizen can easily start a project in his village.”

“This can offer him a good income and save him from participating in these smuggling operations,” Qaweesh added.

But with Egypt in economic straits and ever-unpredictable political conditions, there remains a solid chance that migration by Egyptian nationals will likely continue and rise into next year. This year has also seen growing numbers of refugees, asylum seekers, and migrants from Eritrea, Ethiopia, Somalia, and Sudan using Egypt’s northern coast to reach Europe (although not Syrians, who used to form the largest group leaving Egypt).

The Egyptian government should be ready to respond seriously and proactively to rising migration flows in a way that puts saving lives and protecting the rights of migrants first, without resorting to security-led, punitive solutions. Egypt’s anti-smuggling law will be a good first step, but it has to be followed with training for law enforcement and judicial officials. The EU and partner countries should also prioritize any future migration cooperation with Egypt on the same terms, not selling-out rights protections for limiting migration flows to Europe.