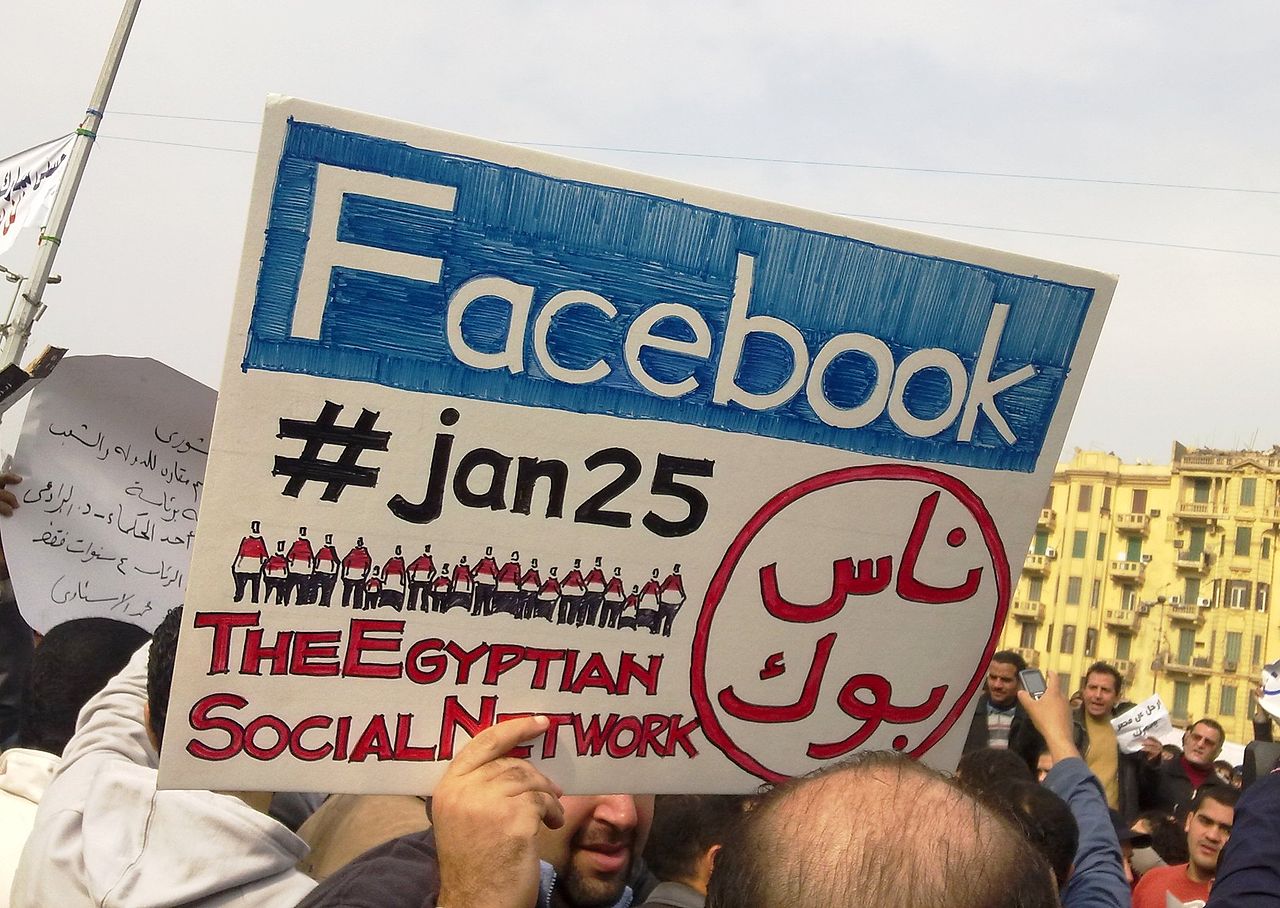 Earlier this year, the Egyptian Ministry of Interior announced a tender offer for equipment and technology capable of conducting surveillance on various social media and networks. These networks included specific smartphone applications such as Viber and Whatsapp, as well as content analysis tools that can identify political opinions on social media websites.

The tender offer would also set up social media accounts for the Ministry of Interior that would provide a platform for it to contradict opinions it sees as dangerous. The announcement of the tender offer naturally roused criticism from human rights activists in Egypt. Surprisingly, it also roused criticism from some pro-government media outlets, which viewed the announcement as a confirmation of the security apparatus’s desire to control the digital space, a step too far for even the pro-regime media. Despite this criticism, the fate of the project remains unknown.

Criticizing religion and religious figures is grounds for the invasion of digital privacy in Egypt, based on the claim that expressing socially unacceptable religious beliefs is itself a crime. A number of social media users had their accounts hacked into and were arrested after they published their honest opinions of popular religious beliefs in Egypt.

In June, a man from Luxor was sentenced to six years in prison for publishing a picture deemed to be sacrilegious to Islam on his personal Facebook profile. The investigations into this crime failed to show any evidence that he had published the picture with any intent of inciting violence or sectarianism. His sentencing is in clear violation of international human rights law and goes against the International Covenant on Civil and Political Rights (ICCPR), which states that blasphemy laws are incompatible with the guarantee of civil and political rights (per General Comment No. 34 of Article 19 of the ICCPR).

Recently, the number of Egyptians arrested for homosexuality has increased dramatically, in part due to government surveillance of online activity. Because social networking surveillance has played a prominent role in these arrests, the leading dating app for the gay community, “Grindr”, issued a warning to its users in Egypt, notifying them that their identities may be exposed by their use of the app.

There are a number of reasons that the Egyptian regime wants to maintain surveillance over the digital space. Chief among these is to keep tabs on criticism of the regime and its various branches, including the presidency, the judiciary, and security apparatus – even when criticism is relatively benign.

Crackdowns on criticism have even gone so far as to target those who criticize pro-regime media personalities. The administrator of a Facebook page was arrested after posting a photo of the pro-regime television host Ahmed Moussa that had a sarcastic caption. Moussa filed a report against the page and its administrators with the General Department for Information and Documentation, which hacked into the page and retrieved the personal information of its administrators without a court order.

The History and Law of Surveillance in Egypt

While both the freedom of expression and the freedom to exchange information are guaranteed by Egypt’s 2014 constitution, they – like most other rights included in the nation’s supreme legal document – are not fully respected. The state can completely circumvent these rights by accusing social media users of crimes such as contempt of the judiciary, contempt of religion, or calling for protests without a permit. Thus, constitutional rights are sidelined in the name of public decency and maintaining the peace. In these cases, the judiciary and police are given the right to acquire the personal data of any citizen and trace their online behavior under the guise of protecting national security and other interests.

Legislative attempts to control digital space are not a new phenomenon in Egypt. In fact, in 2003, long before digital media was ubiquitous, the Egyptian parliament passed an intrusive law, known as the telecommunications regulation law (Law 10/2003). The legislation compelled Internet service providers (ISPs) to comply with any orders issued by the armed forces or other security bodies. It also required them to provide – at their own expense – the equipment and software necessary for the armed forces and security apparatus to carry out “their purview,” without specifying what that meant. Finally, it required ISPs to collect and maintain detailed information on their users.

The government bodies that have the right to interfere in Internet service in Egypt under this law’s jurisdiction include the armed forces and security bodies such as the presidency, the Ministry of Interior, the National Security Authority, and the Administrative Control Authority. The repeated use of the phrase “for the purposes of national security,” which gave the armed forces and security apparatus the right to intervene in ISPs’ operations without clarifying their purposes, suggests that the legislation was more than simply bureaucratic regulation.

Egyptian authorities had clearly foreseen the potential of digital communications as a tool for social networking. In the 2003 communications regulation law, they tried to prevent the Internet from being used in a way that would harm or disrupt the regime, requiring criminal penalties for those who intentionally “annoy or harass others with the misuse of communications media.” For long after the law was issued, the definition of “annoyance” and “harassment” were unclear. Neither was it clear what types of online behaviors could lead to prison sentences. This became clear, however, when the Egyptian authorities began targeting bloggers and users of various social networks such as Facebook, Twitter, and YouTube for online activism after the January 25 revolution. Most prominently, an Egyptian blogger was sentenced to three months in prison in 2014 for writing and posting a video to YouTube in which he sarcastically criticized the Ministry of Interior. He was convicted according to Article 76 of the 2003 telecommunications regulation law (Law 10/2003).

Both the ICCPR, which Egypt signed in 1982, and the 2014 Egyptian constitution, guarantee citizens the right to privacy. In fact, according to Egyptian law, superseding an individual’s right to privacy for surveillance or spying requires an explicit court order.

In spite of these protections, the judiciary and security apparatus have systematically violated individuals’ right to online privacy. Interrogations with those accused of publishing criminal content via social media often include pressure to reveal their usernames and passwords so investigators can collect more evidence against the accused. When investigators are unable to collect needed information, they can also refer the case to the General Department for Information and Documentation, a technical office in the Ministry of Interior that is able to access private email accounts and reveal the identity of account administrators.

In 2006, members of Congress issued a statement revealing that the NSA had spied on the phone calls of millions of Americans. Former AT&T technician Mark Klein also leaked information that the company had installed a fiber optic splitter at its San Francisco headquarters, using it to obtain copies of the emails and browsing histories of its Internet clients, which were then provided to the NSA. By 2013, reporters at the Guardian and the Washington Post acquired official documents confirming that the NSA had digitally spied on U.S. citizens.

It is now clear that U.S. policy had pushed for complete oversight of communications after 9/11, with the purpose of fighting terrorism and protecting U.S. national security. This idea is not so different from that which has pushed many Arab states to consider expanding their surveillance practices. Naturally, the constant development of stronger and more sophisticated surveillance methods will require citizens to have new forms of protection from intrusion. To that aim, the Electronic Frontier Foundation (EFF) recently issued a Surveillance Self-Defense guide, which is publicly available.

In response to these blatant rights violations and online privacy concerns around the world, international movements advocating for online communications rights are growing. These movements have adopted core principles that guarantee individuals digital freedoms and rights while also laying guidelines for monitoring and surveillance.

Over 300 rights organizations and more than 50 academics, experts, legislators, and politicians worldwide participated in the formulation of these principles. Among the most important is the principle that communications media should not be monitored unless there is a specific and legal rationale for the monitoring. It also outlined standards to test the extent to which surveillance laws adhere to international human rights law, including the principles of necessity and proportionality.

Ensuring the right to privacy and freedom of expression require not only anti-spying technology, but also to the political will of those in power. Surveillance is a political decision, made by governments that have proven their willingness to spend millions of taxpayer dollars to find out what is in people’s inboxes. Meanwhile, consecutive Egyptian governments have prioritized the surveillance of communications media over the improvement of Egypt’s telecommunications infrastructure which, according to Ookla’s Net Index, puts Egypt among the top 20 countries with slowest internet in the world.