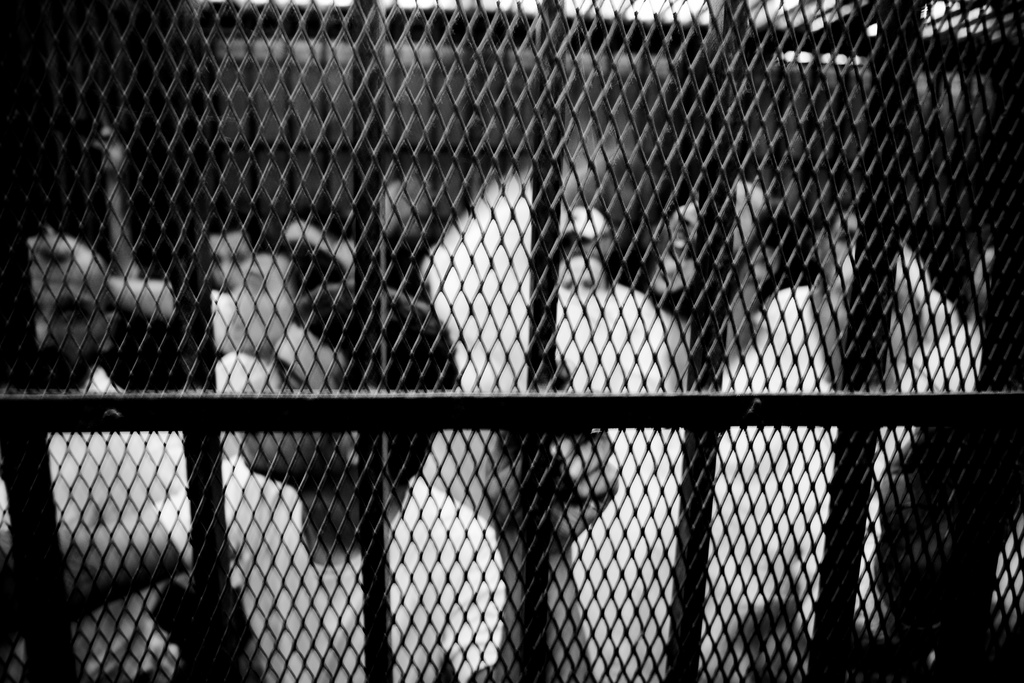 With the heightened crackdown on activists, journalists, Muslim Brotherhood supporters, and political dissidents of all stripes, Egypt’s police stations and jails are housing thousands, if not tens of thousands of detainees. WikiThawra, an aggregating initiative in conjunction with the Egyptian Center for Economic and Social Rights (ECESR), estimates that a total of 41,164 detainees were arrested between July 3, 2013 and May 15, 2014. More alarming than the sheer number currently held in Egypt’s detention facilities however, are the increasing instances of “remand,” also known in many common law nations as pre-trial detention.

Under Article 142 of Egypt’s Criminal Procedure Code, which establishes the guidelines for a remand, an individual who has been arrested can initially be detained (even before being charged) for 15 days; upon listening to the testimony of the accused and the prosecutor however, remand can be extended for up to two additional 15-day periods, amounting to a total of 45 days. If the judge finds that the investigations are not yet complete at the 45-day mark—a subjective determination based on the assessment of the prosecutor—he  may refer the case to court and seek additional periods of detention renewal, each of which are generally 45 days in length.

If the detainee has been held for a total of three months, Article 143 mandates that the Prosecutor-General ensure that an effective investigation is taking place. The article stipulates that in all cases, pre-trial detention cannot be extended for more than six months for misdemeanors, eight months for felonies, and two years if the crime is punishable by death or life imprisonment. In September 2013, however, Article 143 was amended by interim President Adly Mansour as it pertains to charges punishable by death or life imprisonment in cases of appeal or retrial; the amendments set forth 45-day periods as the standard renewal periods granted in such cases and completely removed the two-year maximum time limit.

As explained by Malek Adly, a lawyer with ECESR, the amendments create a situation in which detainees who are accused of political crimes, like attempting to overthrow the regime and picketing outside of government buildings, may be detained indefinitely without trial. As peaceful protesters and journalists performing their everyday job duties continue to be sentenced to hefty jail terms and detained, the existing heavy-handed legislative environment renders the “possibility” of indefinite remand disturbingly clear.

From a legal perspective, remand is an extremely controversial tool, set forth by states to remove what may be deemed “immediate dangers” from the streets of the nation; this pre-trial detention is the first step in what is meant in legal theory to be a speedy endeavor to charge the accused and begin the investigative and trial process. Many have expressed concern at the notion of pre-trial detention in that it considers individuals who are accused of a crime “guilty before innocent,” even before they are formally charged, thus defying the spirit of the modern rule of law tradition. For this reason, most countries that have a working pre-trial detention system have separate prison units (known as “remand prisons”) and often release suspects on bail if there are no overwhelming public safety concerns. Such measures are intended to create a palatable distinction between convicted persons and individuals who are temporarily detained.

In a country like Egypt however, where mass trials are held to punish hundreds and severe sentences are issued to crackdown on all forms of dissent, the principle of remand creates a legal scheme with countless loopholes that are easily abused. Such abuses violate the principles of justice that the country technically espouses in its Constitution and under its international legal obligations. Remand detainees are often held in the same jail conditions as convicted persons, many times deprived of their rights to visit with family, put into solitary confinement for their political beliefs, subject to the same torture and abuse committed by jail wardens, and even forced to attend detention renewal hearings in prison facilities, rather than actual courtrooms. For remand detainees, the injustice is magnified: in addition to suffering Egypt’s poor prison conditions, they are effectively guilty merely by virtue of their detention.

The case of Al-Jazeera Mubasher Misr’s Abdallah Elshamy, a journalist who was only recently released due to medical reasons after 147 days of hunger strike, is one of many unjust stories of remand. Before his release, Elshamy had seen his detention extended, initially by 15 day periods and eventually 45 day periods, for a total of around 306 days. For the duration of the time spent in jail, Elshamy was not charged with a single crime. Anecdotes from his renewal hearings also suggest that the judge blatantly used the principle of remand to “punish” Elshamy for what the state perceived to be Muslim Brotherhood ties; at one session, Elshamy’s wife contends that the judge opened the session and asked Elshamy what he wanted. Elshamy then responded “freedom,” and seconds later, the hearing was over. The judge then slammed Elshamy with another 45-day detention period.

Elshamy, whose case gained prominence due to his hunger strike and the dedicated efforts of his family and civil society mobilization, is not alone. Mahmoud Abu Zeid, for example, is a 27 year old freelance photographer who was detained while covering the Raba’a sit-in dispersal last year; he has been detained without charge since August 14, 2013 and has seen his detention renewed for well over 300 days. Journalists, students, and political activists, including prominent Alexandria activist Sherif Farag, have also seen similar fates as remand detainees.

As Freedom for the Brave, a local campaign focusing on detainee rights, states: “Those remanded into custody stay in prison for unlimited periods…pending investigations that never get done, on imaginary charges that they may be acquitted for.” Decisions to renew detentions are often completely left to the discretion of judges, many of whom have voiced their explicit vendettas against groups like the Muslim Brotherhood, some of whom are attempting to prove their loyalty to a state obsessed with national security, and others who rely on evidence put forth by already broken institutions within Egypt’s security sector. Despite the many and well-publicized anecdotes of detention renewals, torture, and questionable judicial processes, the state and its actors largely deny holding individuals without charge and often attempt to deemphasize the number of persons held on remand.

Although in existence since the founding of the Egyptian system of rule of law, the principle of remand has seen a disproportionate level of abuse in recent months and is quickly evolving into a means by which to punish individuals who have not yet been charged with a single crime—innocent civilians under Egyptian law. The insistence of the state to further the crackdown on the country’s opposition suggests that this occurrence is merely the beginning and disrespect for due process may establish a disturbing precedent; what is today a worrisome trend is quickly becoming a norm for tomorrow.