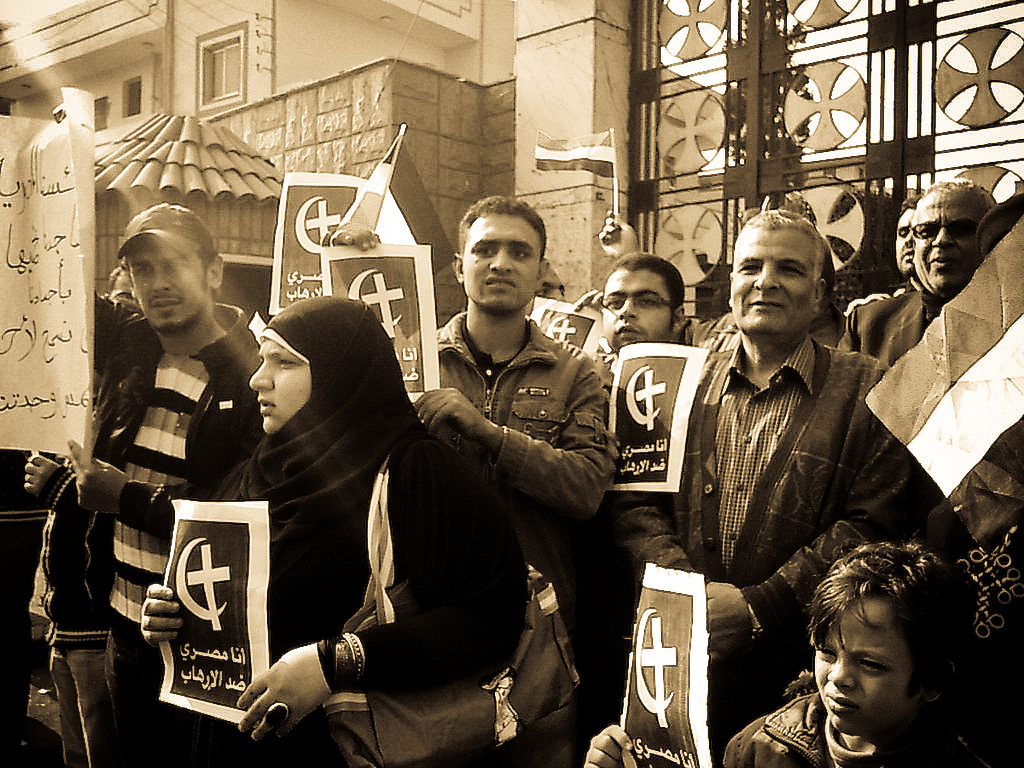 On April 5, 2013, sectarian violence erupted in the town of Khesous in Qalyubia, another instance of what remains a serious problem across the country. Although sectarianism has long plagued Egyptian society and has historically been poorly combatted, sectarian attacks seemed to spike amid an atmosphere of seeming impunity both during and after the presidency of Muhammad Morsi, ultimately reaching an unprecedented climax that involved a concerted set of attacks on one hundred churches and Christian institutions in the wake of the Raba’a and Nahda sit-in dispersals. The continued presence—and even escalation—of sectarian violence from the Mubarak era onwards, regardless of changes in government, only highlights the continued failure of those in power to attempt to address the roots of the problem. The details of the incidents that led to the Cathedral attacks and the manner in which the police responded illustrate the complex and the multifaceted nature of the problem, and various state institutions can be implicated in its perpetuation.

Two local narratives exist to explain the cause of last year’s violence in Khesous, though they speak of different kinds of deeply-entrenched sectarianism. In the first, a Muslim man named Muhammad Mahmoud was shot and killed by Nassim Farouq, a Coptic man who was defending a married Coptic woman who had been subjected to Mahmoud’s ongoing sexual passes. Following Mahmoud’s death, Farouq’s home was set on fire by friends of Mahmoud, thus setting off an escalating cycle of violence. In the second narrative, the attacks began after a handful of children drew a Nazi swastika on the walls of an establishment affiliated with al-Azhar. A number of local Muslims, thinking that the swastika was a cross, were angered by the incident and responded with violence, attacking Farouq’s home, burning local businesses, and attempting an attack on the local Mar Guirguis Church.

Irrespective of the exact details, Mahmoud’s death sparked a cycle of violence, with snipers randomly shooting at pedestrians for days thereafter, one imam calling on worshippers to “defend their Muslim brothers against the Copts,” and one Coptic man, Samir Iskandar, encouraging locals to partake in the violence with weapons. Ultimately, the clashes left up to seven dead and 22 injured, and they brought major disarray to Khesous. At the April 7 funeral for the Coptic victims held at St. Mark’s Cathedral in Abbasiya, assailants attacked mourners with birdshot, knives, and petrol bombs, leaving two dead and 90 injured. Policemen in the area watched the attacks unfold and completely failed to intervene to protect the terrorized worshippers throughout the extended siege. Police even fired teargas over the Cathedral’s walls, effectively joining in the attack on the mourners.

The violence in Khesous was treated in the same way as most sectarian attacks in Egypt, with superficial reconciliation sessions that do not address the heart of the problem and investigations that do not reflect accurate and necessary fact-finding

The violence in Khesous was treated in the same way as most sectarian attacks in Egypt, with superficial reconciliation sessions that do not address the heart of the problem and investigations that do not reflect accurate and necessary fact-finding. In December 2013, verdicts were issued in a case investigating the events: one Coptic man received a life sentence and a 15,000 EGP fine; at least 11 others received jail sentences of between six months and 15 years; and 32 defendants were acquitted. Questions remain regarding both the fairness and the transparency of the proceedings.

Khesous represents neither the first nor the last sectarian attack in Egypt, but its anniversary is an appropriate time for us to mourn those who lost their lives and to ask the difficult questions necessary to bring such actions to a halt. In a country that continues to witness political and social upheaval, the recent collective memory of Egyptians includes prominent incidents of sectarian violence, like the January 2011 bombing of Alexandria’s Two Saints Church and the Maspero massacre, as well as ongoing struggles that have become a part of daily life, including religiously-inspired graffiti on church walls and kidnappings and jizya payments in regions like Minya. Specific disputes of a personal nature, perhaps regarding interreligious romantic relationships or land disagreements, often quickly devolve into broader disagreements featuring the use of sectarian rhetoric, leading to the taking of sides based on spiritual identification and the involvement of others on both sides. At other times, the sectarianism is more immediately present, as has been the case with recent attacks on churches as retribution for the faulty belief that Christians are largely responsible for the ouster of Morsi.

Whether looking at the governments of Mubarak, the Supreme Council of Armed Forces (SCAF), Morsi, or the current transitional period, it is clear that sectarian conflict has been a constant presence. There is no doubt that the political rhetoric of those in power has influenced the form in which such conflict has emerged and the manner in which it has been treated. However, Egypt still contends with the same set of problems that stem from a refusal to recognize the issue of sectarian strife and treat it accordingly; the country’s tendency to use its Christian population as a political tool only makes things worse. An irresponsible media that has been guilty of inciting violence and depicting issues through sectarian lenses continues to enjoy air time. A police force that has been found guilty not only of allowing attacks to continue without interference, but even of partaking in such violence, has remained armed and without checks. A set of archaic laws on the building of houses of worship continues to impede the ability of Egyptians to freely pursue their religious freedoms and under the protection of the State. A state-formulated curriculum that incorporates implicit sectarian rhetoric in its religious teachings impedes holistic understanding of the “other.” Finally, the judiciary, fearful of implicating the State as a contributor to the problem, is often unwilling both to engage in detailed fact-finding and to conduct fair proceedings; both are necessary to identify the root causes of sectarian conflicts, and this reticence remains a bar to progress.

Article 53 of Egypt’s newly-passed Constitution mandates the equal protection and equal treatment of all citizens irrespective of religious identity and punishes incitement to hate. Article 64 lays out an absolute freedom of belief and a freedom to practice religious rites for the “divine religions” [Christianity, Islam, and Judaism], and Article 235 states that the House of Representatives will issue a law to organize the building and renovation of churches. The presence of these articles highlights the State’s failure to adequately investigate and halt sectarian attacks, to litigate cases against media personalities and community leaders who incite their followers to violence against minorities, to pass legislation to appropriately implement the principles of the new Constitution, and to provide Christians in particular with a safe space in which to practice their religion without being terrorized. Similarly, a look at Egypt’s international legal obligations under treaties it has ratified, including the International Covenant on Civil and Political Rights, reveals how much is left to be done.

Bound by domestic and international legal obligations, Egypt has a duty to address a phenomenon that has long been swept under the rug. It is, though, a shared responsibility of the State (including the military and police forces), the schooling system, the religious institutions and their spiritual leaders and figures, and even the heads of families to recognize the tragedy of a society split along religious fault lines. Until this realization leads to the taking of action on every level, the victims of Khesous, alongside those of every other instance of sectarian violence, will have lost their lives in vain.