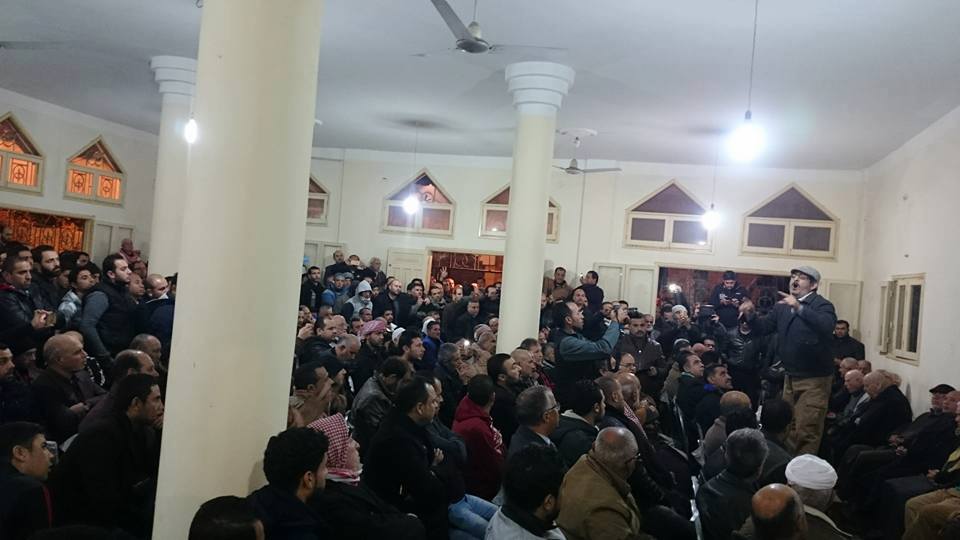 February 11 marked the first day of a partial civil strike in Arish called by a number of North Sinai tribes. The civil disobedience comes amid the state’s failure to explain the circumstances behind a security operation last month that killed 10 alleged militants affiliated with the Islamic State’s Sinai Province. Police officials accused the men of being involved in an attack in January that killed eight security personnel, but the families of five of the individuals assert that their sons had been taken from their residences and transferred to the headquarters of Egyptian Homeland Security in Arish.

Threats for the strike first appeared in a statement issued after a meeting held by the tribes following the security operation. In the statement, the tribes asked authorities for a rapid and fair investigation into the incident and refused suggestions to meet Interior Minister Magdy Abdel Gaffar.

The late response from authorities pushed the tribes to declare, in a second meeting, a partial strike to begin on February 11, coinciding with the sixth anniversary of former President Hosni Mubarak’s stepping down, according to their statement on the second meeting.

“The partial strike will be in the shape of not paying electricity and water bills as a first step,”the statement read. “All tribes are invited to attend a mass conference on 25 February for the sake of escalation.”

On February 12, the second day of the civil strike, masked militants affiliated with Wilayat Sinai distributed for nearly half an hour leaflets expressing solidarity and condolences to the families of the men who were killed.

“We offer condolences to our families in Sinai for their sons who have been killed by tyrants who are also killing us as they have done exactly with you,” the Wilayat Sinai statement read. “They called us ‘takfiris’ to separate us from you, but we will retaliate for your sons’ blood and we ask you to be away from any security stationing points.”

In response to the leaflets, the families released a statement that carried questions on the frequent killings executed by militants against civilians in the city that are taking place amid security absence. The statement also said the government was fighting terrorism with terrorism, pointing out that militants were able to make an open appearance after the state killed 10 alleged terrorists. The statement called tribal representatives from Rafah, Sheikh Zuweid, and other North Sinai cities to attend the next conference of the families, slated for February 25.

In January, the city of Arish witnessed a deadly exchange between about 20 Wilayat Sinai fighters and a number of police personnel at al-Matefi checkpoint near a residential neighborhood. A garbage truck exploded near a checkpoint, allowing the militants to enter it, killing eight policemen. This was an unusual incident, an open battle in a residential area of Arish in full view of civilians. Several residential and commercial buildings near the checkpoint were damaged by the initial explosion.

Wilayat Sinai’s recent condolences raised the possibility that the group may gain sympathy from tribes byclearly echoing grievances—and not receiving effective pushback from authorities.Through previous propaganda, the group has repeatedly warned North Sinai tribes from supporting military and police forces—and that doing so would make them a legitimate target. Sinai Province has asked them not to follow the strategy of Iraqi tribal coalitions known as the Awakening (al-Sahwat).

However, a number of anonymous residents from Arish have claimed that the crisis among the clans and the subsequent strike would not lead to sympathy for or cordiality toward Wilayat Sinai. They noted that the tribes, both inside the city and around North Sinai, have animosity for the group due to several operations conducted by Wilayat Sinai against civilians. The group released a video in December 2016 showing numerous civilian decapitations and other killings in North Sinai, warning civilians not to collaborate with military and police forces. Several local clerics were kidnapped last fall, and Wilayat Sinai beheaded two of them, the 100-year-old Sufi Sheikh Suleiman Abu Heraz and Sheikh Said Abdel Fattah of the Ministry of Religious Endowments, in November. These acts against civilians repulse the local population and prevent the tribes from embracing Wilayat Sinai even amid their frustration with the Egyptian government.

Despite the current conflict with the interior ministry regarding the 10 alleged militants who were killed, the tribes of Arish would rather cooperate with the sovereign ministries—defense, interior, and foreign affairs, as well as the security apparatus—to discover what happened, rather than partner with Wilayat Sinai against the state. Any communication between Wilayat Sinai and the clans would be monitored by these agencies, and would lead to catastrophic results that are not in favor of the tribes.

On a regular basis since 2014, Wilayat Sinai has tried to show that it has popular support inside the cities of North Sinai, through releasing photographs of their militants interacting with the population. Pictures claim to show their members standing with children, disseminating flyers, or handing out food or monetary assistance. However, according to numerous residents, these releases are merely staged propaganda pieces, and militants emerge only to take these photographs when they are sure that army and police forces are not stationed in the area. Whenever militants know that a government operation is reaching their stationing points, they rapidly abandon them. Residents there assure reporters that the government’s mistakes—inaccurate shelling that strikes civilians, overbearing security measures, and the security forces’ general mistrust of Sinai residents—cannot be compared to the crimes committed by Wilayat Sinai.

The first step by the residents in Arish is aiming to take the pulse of the government, in hopes of having the state respond to their demands. While the citizens will escalate on February 25 if the state does not reply, the brutal acts committed by the members of Wilayat Sinai will effectively eliminate any role for the group on the families’ side.