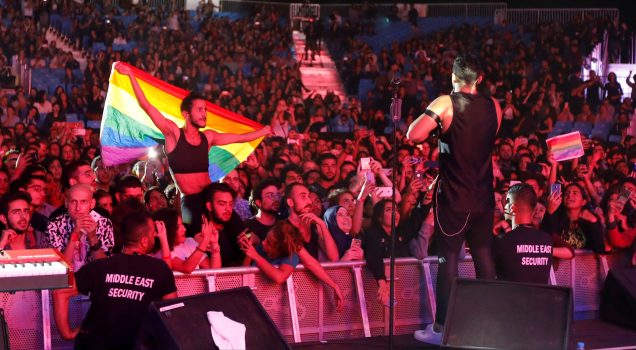 A fan of Lebanese alternative rock band Mashrou' Leila holds a rainbow flag during their concert at the Ehdeniyat International Festival in Ehden town, Lebanon, August 12, 2017 (photo by Jamal Saidi for Reuters).

The world has made major progress in LGBT rights in the last few years. Same-sex marriage is now allowed in several countries and the United Nations Human Rights Council appointed an independent expert on protection against violence and discrimination based on sexual orientation and gender identity. Yet in Egypt, LGBT individuals and activists are still sent to prison and socially shamed and attacked. Egypt’s arrests of at least 65 people following a concert in September at which a rainbow flag was raised are part of state authorities’ systematic attack on the LGBT community, which faces a social stigma in which homosexuality is considered a disease and indication of psychological disturbance. The socially aggravated violence against LGBT individuals provides judges with the legal argument for considering homosexuality as an immoral practice, and gives a green light to attack the queer community without fear of opposition or questioning violations committed by law enforcement authorities.

In recent years, especially after the 2011 uprising, Egyptians have made breakthroughs in publicly addressing civil rights and calling for more rights for marginalized groups. However, Egyptians still face the same dilemma of how to tackle the issue of LGBT rights legally and socially. The state has targeted civilians according to their gender identity in notable cases such as the 2001 raid on the Queen Boat restaurant and nightclub, after which 52 men were put on trial, and the 2015 trials of men arrested in a raid at the Bab al-Bahr bathhouse in 2014. The most recent crackdown took place after a concert on September 22 attended by more than 30,000 fans of the Lebanese alternative rock band Mashrou’ Leila. Three attendees raised a rainbow flag to support LGBT rights in Egypt. While the LGBT community and other supporters of their rights first circulated the photo on social media as a celebration of public support for the community, it started widespread debate. Some responded with angry statements, asking for those who raised the flag to be arrested and the band’s lead singer, who is openly gay, to be banned from performing in Egypt.

State-sponsored media and independent outlets began vicious attacks, calling for a crackdown on the LGBT community, whom they claimed were ruining social values by promoting immorality and homosexuality. Some politicians and religious leaders joined the attacks and demanded a firm response by the state. On September 25, Egypt’s chief prosecutor announced an investigation into the rainbow flag incident. Dozens of the detainees in this police investigation were denied the right to contact their lawyers before interrogations began and their cases were referred to trial without any chance to become acquainted with the police reports or their accusations. Days later, on September 30, the Egyptian Supreme Council for Media Regulation issued a public statement prohibiting the promotion or dissemination of any LGBT slogans, and describing homosexuality as a disease and disgrace that should be hidden, not propagated. The council said it only permitted the publishing statements from or appearance of LGBT individuals in the media when they are coming out publicly to repent for their actions. Al-Azhar Grand Imam Ahmed al-Tayeb later expressed shock at calls for recognizing homosexuality as a human right, saying Eastern men are “known for their manhood” and disgust at such “deviations” and “congenital malformations.” Meanwhile, the silence of human rights activists and nongovernmental organizations in Egypt cannot be ignored. A large number are still debating whether to support LGBT rights, while only few are able to provide legal aid to the people arrested in such cases.

This notwithstanding, Egyptian law does not criminalize homosexuality. Courts skirt around this fact by sentencing individuals under alternative accusations. For example, courts usually use the Anti-Prostitution and Debauchery Law 10 of 1961 to charge LGBT individuals with habitual debauchery and promoting debauchery. Courts also use Article 269 II of the Penal Code for inciting people in public to commit debauchery. Moreover, in many cases in which there is no solid evidence that the defendants have been involved in any sexual practices, the court can still sentence them. According to Article 178 of the Penal Code, the court can charge them for promoting immoral practices by raising a homosexual slogan that contradicts social moralities and values. Article 14 of Law 10 of 1961 imposes a sentence of up to three years’ imprisonment on anyone who “declares in any way or means to make an invitation involving seduction or immorality.” Additionally, courts can contend that raising the rainbow flag is a publicly scandalous act under Article 278 of the Penal Code.

Some arrested in the latest crackdown on LGBT individuals and others assumed to participate in raising the rainbow flags in the concert have been referred to the Misdemeanor Court and handed prison sentences of up to six years with surveillance after their release. A decree was issued last week by the Egyptian minister of justice to reinstate the Court of Values and the Supreme Court of Values and appoint its members. With the dynamic pattern of violations on freedoms of speech, religion, expression, and sexual orientation, we can only imagine horrific outcomes from such a decision, as individuals can now be prosecuted in front of these courts for harming the social values, among other accusations. According to the decree, the judgments of the Supreme Court of Values will be final and will not be reviewed by the Court of Appeal.

Last week, it was reported that members of the House of Representatives had proposed a new draft law to criminalize homosexuality, describing it as abnormal behavior more dangerous to society than violence and terrorism. The draft bill would punish anyone engaged in homosexual relations with one to three years’ imprisonment, followed by surveillance for the same period of time, and the publication of the sentence in two widely read daily newspapers. If that person was caught practicing homosexual activity after being released, he or she would be sent back to prison for a period of five years. The draft law also would criminalize supporting LGBT rights and promoting, carrying, or manufacturing any signs deemed as homosexual, and lists the punishment for such actions as imprisonment for up to three years. The draft was signed by 14 members of the House of Representatives and will be discussed later in committee.

This crackdown cannot be separated from the systematic targeting of LGBT individuals since Abdel-Fattah El Sisi came to power in 2013. The Egyptian government in the summer of 2014 bought a surveillance system from See Egypt, a cybersecurity firm, to monitor all online communications, giving the Egyptian government the ability to penetrate any program to gather data and information. The system has not only been used to prevent terrorist acts or communications between suspected terrorist groups, as was the justification for its use, but it is also being used to monitor the conversations between individuals in the LGBT community. Officials have claimed that this is for the protection of the country.

The apparent human rights violations practiced by the Egyptian authorities against LGBT individuals and others arrested for publicly demonstrating their rights cannot be ignored. During this crackdown on LGBT individuals, the Egyptian state failed to comply with obligations in international human rights law—specifically, the due process and fair trial guarantees protected under Article 14 of the International Covenant on Civil and Political Rights, ratified in 1982. The crackdown is also a violation under Article 7 of the African Charter on Human and Peoples’ Rights, ratified in 1984.

Moreover, the practice of forensic anal examinations of men accused of debauchery is considered a form of cruel, degrading, intrusive treatment and a form of torture, according to the report by Juan Mendez, the former special rapporteur on torture, in his observations on the Bab-Bahr case in 2014. The practice violates the prohibition against torture and other ill treatment, whether physical or mental, as codified in Article 1 of the Convention against Torture and other Cruel, Inhuman or Degrading Treatment or Punishment, ratified in 1986. Additionally, the practice constitutes a violation of the right to privacy under Article 17 of the International Covenant on Civil and Political Rights. Besides, all of the rights mentioned above are protected under Chapter Three of the Egyptian Constitution, which addresses public rights, freedoms, and duties.

Sadly, the international community has failed to address this latest crackdown on individuals based on their sexual orientation. Consequently, the ongoing targeting and stigmatization of LGBT individuals by Egyptian authorities leave the community and their supporters standing alone in the face of vicious attacks by a regime that utilizes various means to oppress, publicly shame, torture, and imprison its citizens according to their private, consensual sex lives. By and large, LGBT individuals do not have the wide support and compassion from Egyptian society, and rights activists, civil society members, and the international community as a whole need to speak louder about the crimes committed against them and defend their rights to have safe and humane living conditions.