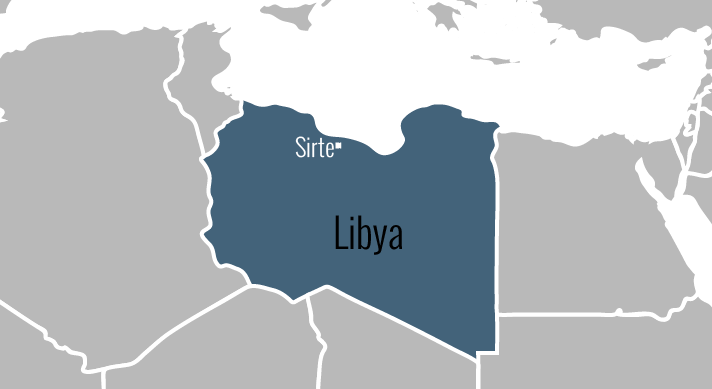 The Libyan city of Sirte

On April 4, 2014, the Islamic Youth Shura Council (MSSI), announced its establishment as its founding members led an armed rally through the streets of Derna, in eastern Libya. The militants asserted that they would act as the city’s security force and promote the introduction and enforcement of sharia, dramatized by the group’s draconian punishments for lawbreakers: summary executions, public floggings, and beheadings.

The scale and intensity of violence by ISL have corresponded with a rise in ISL’s profile, with Western pundits engaging in reductivist narratives and oversimplifications about the franchise’s motivations, ideological foundations, its strength within Libya, and the possibilities of its future on the shores of the Mediterranean. These sensationalist analyses fail to mention that ISL, which was midwifed by core Islamic State (IS) ideologues, has its own Libyan idiosyncrasies and is operationally hindered by the its birthplace. The circumstances which have led to a proliferation of armed groups will prevent ISL from becoming preponderant in the short term. However, in order to eradicate the group before it metastasizes further, a successful campaign must recognize the need for localized solutions.

Ideologically, ISL remains closely aligned with key IS leadership in Iraq and Syria. Its style of governance, including a pseudo-vigilante Islamic police department, legal institutions and a segregated education system, mirrors similar governance models in IS-controlled territory. ISL has also targeted Christians, destroyed Sufi shrines and has centralized its propaganda machine under al-Hayat, IS’ media branch. In terms of tactics, rising suicide bombings in Benghazi have underscored the group’s influence on combat operations. IS was instrumental in setting up a Libyan affiliate, with reports that senior IS officials visited Libya, including a leading jurist and a member of al-Baghdadi’s inner council. These visits, and the homecoming of Libyan-born veterans of the Syrian conflict, spurred MSSI’s evolution from an offshoot of the al-Qaeda-linked Ansar al-Sharia into a non-contiguous province of the self-declared caliphate.

At the same time, ISL has showcased its ability to adapt to the uniqueness of Libya’s battlefield. It has used opportunism and its capital as the rising jihad superpower to recruit groups linked to al-Qaeda. For example, members of Ansar al-Sharia in Benghazi have increasingly flocked to ISL following the death of its founder, Mohammed al-Zahawi, with reports stating that the group may officially pledge itself to IS. Furthermore, ISL has welcomed those willing to renounce previous associations, including Qaddafi supporters. This reconciliatory ability is in stark contrast to other groups in Libya, which remain exclusive and exclusionary. However, ISL has not been able to exploit tribalism among Libyans to further its ends, with the majority of Libya’s Arab tribes having sided with Dignity forces. Without a strong grounding in Libya’s ethno-tribal climate, it has attempted some outreach, including recruitment videos aimed at the Tuareg and Tebu minorities. As with its parent organization, though, foreign recruitment from the greater Middle East has been central to the group’s expansion in Libya, with reported fighters and leaders from Egypt, Tunisia, Sudan, and Yemen, among others.

However, the same conditions which brought IS to Libya—the troves of Qaddafi-era weapons, the lack of a central state, and the country’s geography—have produced a tangled web of political and military factions that are currently vying for institutions, natural resources, and legitimacy to maximize their power. These loose coalitions rooted in geography, Islamism, ethnicity, or tribal allegiances fight for their own parochial interests and are motivated by both national and localized rivalries born across the country’s dictatorial, revolutionary, and post-revolutionary periods. While this socio-political disintegration has been a driving factor for transnational jihadism, it has also turned the security field into a hydra, where competing militias seek control over territory and lucrative sectors, including smuggling networks and the country’s natural resources. This will impede efforts by ISL to carve out territory to govern.

Likewise, Libya lacks many of the circumstances that made Mesopotamia more susceptible to advances by IS. Libya’s lower population and relatively homogenous religious orientation stand in contrast to Iraq’s sectarian conflict. Libya’s oil and gas fields are located in its ungoverned and underpopulated interior, while its large-scale industrial refineries are on the coast, unlike in Iraq and Syria where smaller, local refineries flooded the group with cash. Therefore, in order to maintain the supply lines for oil production, ISL would have to control fields, refineries and adjoining pipelines, while fending off rival claimants and saboteurs. Even if ISL were able to maintain this capacity, it will still have to find willing buyers, which, if the seizure of oil ports by federalists is any indication, should assuage fears of a cash cow for IS.

ISL, which has emerged from its infancy as the MSSI, has proclaimed its arrival on the Libyan stage with violence and barbarity. It demonstrates a clear ideological link to the IS brand, and threatens Libya with recruitment drives that call for an influx of jihadists to transform Libya into a bastion of power for the group. The same conditions that fostered its development, however, concurrently limited the emergence of any preponderant faction within Libya, and will likely prove a counterbalance to ISL’s operational capabilities. While this will hamper ISL’s short-term ambitions, it is no guarantee of stability or security, especially as the group’s profile grows among jihadists.

Therefore, it must be central for Libya’s dizzying patchwork of political actors, armed factions, and communities, with the support of the international community, to respond proactively to the threat, while not grafting existing strategies from Iraq and Syria. Libya’s solution lies in a holistic political agreement that paves the way for what the country desperately needs to combat the specter of ISL terrorism: a truly national army that has a monopoly over the legitimate use of force and the ability to patrol Libya’s immense land and sea borders. The first step is the formation of a national unity government from an inclusive dialogue among national, municipal, and tribal elements. This process has been initiated by the United Nations Support Mission in Libya and Special Representative of the Secretary-General Bernardino Leon. Without this process, the imbroglio will continue, threatening Libya with an empowered, unchecked ISL.