In 1918, Austrian economist Joseph Schumpeter wrote that “the spirit of a people, its cultural level, its social structure…all this and more is written in its fiscal history, stripped of all phrases.” The same can be told about the relationship between the Egyptian society and taxation. The middle class has typically borne most of the tax burden in middle-income countries because it is difficult to tax the rich and unfair to tax the poor. But has that been true for Egypt? And what does the new budget for the 2014/2015 fiscal year bode for Egypt’s middle class?

The definition of the middle class is not straightforward. The classic identifiers of middle class, however, include income, expenditure, education, and occupation, however, concrete indicators are difficult to determine and may vary depending on approach and context. A fuzzy World Bank definition identifies the middle class as individuals with per-capita income of $10-50 per day in 2005 Purchasing Power Parity (PPP) dollars. By this definition, the middle class in Latin American and Caribbean countries doubled in the last decade to comprise one-third of the population. It is fair to believe that the size of middle class is bigger in Egypt, albeit with higher concentration at the lower tail of income. For the purposes of identifying efficient taxation on the middle class in Egypt then, it is sensible to consider the middle class as those in the sixth through second decile of income earnings (and consumption, as these patterns typically align).

Historically in Egypt’s state budget, taxes contribute to two-thirds of public revenues and one-sixth of GDP, which is significantly less than comparable lower-middle income countries. 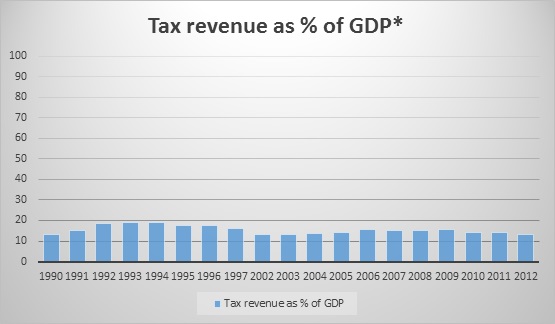 *According to World Bank data.

The composition of taxes is more revealing about the actual contribution of the middle class to public revenues. First, middle-class households do not pay much of their income into taxes as payroll taxation contributes to around 1.5% of GDP, which is the lower bound for middle-income countries at 1-3% respectively. Second, there is virtually no taxation on the entrepreneurial activity of the middle class as taxes on professional services such as medicine, engineering, and accountancy. Third, while the consumption of the middle class is relatively better-taxed, it remains low and inequitable by international standards. Tax on sales of goods and services comprises less than 6% of GDP, which is a fraction of rates in middle-income Latin American countries where urban, middle-class consumption is the major driver of state revenues. Egypt’s middle class arguably pays lesser taxes than its global counterparts. 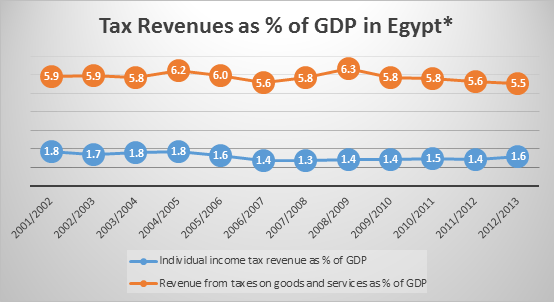 *According to data collected from the Ministry of Finance bulletin “The Financial Monthly” and Ministry of Planning website.

Low taxation has substantial consequences on the economic welfare of the middle class. The first direct consequence is the increased budget deficit, which was estimated at 12% of GDP in 2013/2014. This leads to more borrowing and fewer resources to spend on public infrastructure projects that serve middle class households. Low taxation also increases government borrowing in a way that crowd out lending to households to finance purchase of housing and child education. The third and most important consequence of low taxation is the “inflation tax” that middle class households implicitly pay as the government attempts to rebalance the budget. When taxes are too little, governments tend to cut expenditure—as the Egyptian government recently did by lifting fuel prices by 40-80%. That move will have second-round effects as prices of related (and unrelated) goods will increase in the second half of 2014. The negative impact of these price increases will fall most heavily in urban areas, and because the middle class is concentrated in urban centers, they will be hit hard by these measures.

The new budget did not make bold attempts to distribute the tax burden more evenly on the middle class. Proposed reforms rightly targeted top incomes by taxing dividends and capital gains, as well as activating the dormant property tax. That is indeed good from an equity perspective. However, those reforms alone are unlikely to generate sufficient revenues to cover the burgeoning deficit, because the rich typically have the knowhow to avoid taxes. Significant redistribution can only take place by involving the middle class in sharing the tax burden. To be clear, the rich have and will eventually bear the cost of rebalancing the budget. For pragmatic reasons related to volume, however, the participation of middle class is inevitable.

So how to crack the nut of taxing the middle class? There is no single right answer. More attention should be given to taxing consumption patterns where there is volume to be captured, such as jewelry purchases. Such a tax would provide an incentive to reduce excessive spending and divert savings to more productive channels, for example financial instruments. Another consumption pattern that warrants greater taxation relates to telecommunications. Telecom has a large user base close to 100 million subscribers, as well as low unit cost in view of Egypt’s call rate competitiveness compared to elsewhere. Telecom taxes currently contribute to less than 6% of total sales taxes, so there is room for further revenue generation, especially seeing that this tax is easy to collect.

Not least, taxation should be used to alter road consumption patterns by middle-class vehicle owners. This aims to reduce road congestion as well as restrict the tax burden to the 7% of population who actually own private vehicles. Such a tax structure will effectively require car owners to pay non-owners the cost of congestion, which makes sense in a country with high asset ownership disparity. Road congestion schemes have been successfully introduced in jammed cities such as London and Dubai in a way that reduced commuting times and realized economic gains.

Egypt has been placed on a fiscal consolidation path that requires broad participation from society to fix its structural problems. It is not fair to tax the poor nor is it rewarding to tax the rich without buying the middle class into the process. The participation of middle class is crucial in economic transition because it facilitates social mobility as well as protects against social polarization. Thus, proper taxation for the middle class not only aims to balance the budget, but also promotes a more cohesive society.