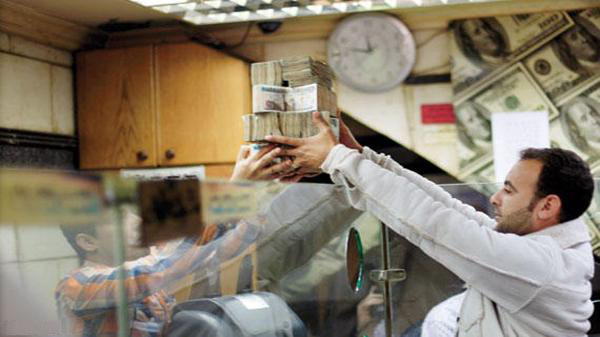 The Central Bank of Egypt (CBE) finally bit the bullet and facilitated a substantial devaluation of the Egyptian pound. The official price of the dollar has risen 14 percent this week from 7.83 Egyptian pounds (LE) to 8.95. The necessity of a devaluation has been widely understood for quite some time, as I explained just a week before the government announced the policy shift. In the past few weeks the black market in Egypt peaked at around LE9.80 to the dollar, a 25 percent premium over the official exchange rate.

The CBE took steps to calm the market with a $500 million exceptional auction (albeit maintaining the artificial price cap) of dollars on March 6. The goal was to inject dollar liquidity into the banking sector and to convince Egyptians that a devaluation was not imminent. The central bank hoped to deter the speculation that was contributing to the skyrocketing dollar price in the black market, and to some extent it worked. The black market did calm down and when the devaluation was implemented the pound had strengthened against the dollar from 9.8 to around 9.25, not far from the official price set by the CBE on March 14.

The Egyptian authorities are working to eliminate the black market. Rather than mimicking past attempts that appealed to patriotism to get Egyptians to put their money into the banking system, the government is opting for a much more reliable strategy: offering real financial incentives. Government-affiliated banks have announced new three-year certificates of deposit that guarantee 15 percent interest on the condition that they purchase the pound-denominated CDs using dollars. High interest rates—in concert with an exchange rate of 8.95 to the dollar—will likely help inject some dollar liquidity into the banking system.

Prior to the devaluation, the government also began selling Egyptians living abroad dollar bonds called “belady” bonds that offer up to 5.5 percent interest to purchasers and guaranteed that the money would be returned as dollars. Bond purchasers are also permitted to transfer their dollars anywhere in the world without interference once their bond has matured. These guarantees are meant to counter fears that once placed in the banking system, depositors’ dollars would be trapped by restrictive capital controls. When the belady” bonds were first announced, they seemed like a half-measure to attract some dollars while the CBE found a more sustainable solution. However, taken in the context of the devaluation and issuance of high interest CDs, they can be seen as part of a larger strategy of using attractively priced financial products to improve the country’s dollar position.

Closing the gap between the official exchange rate and black market rate is essential to solving Egypt’s liquidity problem. The largest source of hard currency in Egypt is remittances, which account for more dollars than tourism and foreign direct investment combined. Former governor of the CBE Hisham Ramez estimated that 90 percent of remittances were going to the black market due to the more favorable rates. As long as tourism and FDI continue their slump while the Suez Canal experiences a drop in revenue, channeling remittances into the banking sector will be key to alleviating Egypt’s dollar crisis.

The CBE has been unable, however, to address the sheer scarcity of dollars. Due to the strict capital controls in place, Egyptians are unable to legally purchase anywhere near the number of dollars they require. Importers regularly turn to the black market to buy dollars in order to finance their shipments. New restrictions on credit and debit card transactions have also caused Egyptians traveling abroad to buy dollars from the black market before departing.

The necessity of purchasing dollars, coupled with the inability to get them through the banks, creates the scarcity problem that produces a parallel market for dollars in the first place. If capital controls are not loosened to facilitate the regular purchase of dollars at the official rate, Egyptians will have no choice but to turn to the black market. The CBE is likely hoping that through devaluation and its attractive banking products for dollars it can attract enough dollars into the banking system that it will be able to loosen capital controls and eliminate the scarcity problem.

Unless the CBE’s strategy is successful in attracting large dollar deposits into the banking system it will not have sufficient hard currency reserves to loosen capital controls and allow Egyptians to more easily purchase dollars from their banks.

In the 11 days leading up to March 16, the CBE has held three exceptional auctions, selling $2.2 billion in total. This has added a large increase in dollar liquidity to the banking system, which will help some importers avoid the black market temporarily. But until the scarcity problem is fully addressed, Egyptians will have to purchase dollars in the black market and thus pay a premium over the banks. While it is early, the black market has barely moved in price since the devaluation and currently sells dollars for LE9.20. It remains to be seen what will happen when the dollars auctioned in the past 10 days are used up. Will those dollars be replaced with dollar deposits and remittances, allowing the CBE to loosen capital controls in order to supply the dollars demanded by citizens and businesses through official channels, or will importers have to turn to the black market once again? The success of the CBE’s strategy depends on the former. It is very likely there will be more devaluations to come in Egypt’s effort to stamp out the black market and win back dollar deposits.