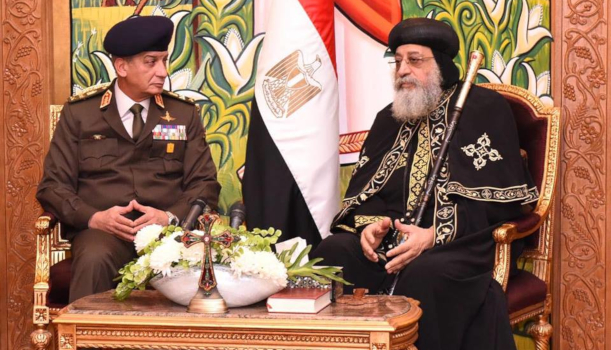 Egypt’s 2016 Church Construction Law established what was, on its face, a streamlined process for the construction of churches, and also provided for a committee to formalize churches which had been built illegally. But Christians still face both official and social restrictions on building their houses of worship, as officials have been slow to issue permits (even to existing churches seeking recognition), security agencies have failed to protect churches and Coptic properties, and violence from neighbors has succeeded in keeping churches out of contested areas.

On April 30, the U.S. Commission on International Religious Freedom (USCIRF) released its annual report on religious freedom around the world. Egypt was designated a “Tier 2” country, as it had been in the previous report, and the commission highlighted the problem of constructing and securing churches. “Neither these approvals [of church applications], nor the additional facilities that have applied to register, nor the presence of preexisting churches address the country’s uneven policies regarding places of worship.” Similarly, in its annual report for religious freedom in 2018, the U.S. Department of State said, “Religious freedom and human rights activists said government officials sometimes did not extend procedural safeguards or rights of due process to members of minority faiths, including by closing churches in violation of the 2016 church construction law.” While the reports primarily covered events and trends in 2018, the issues are long-running and have continued into 2019. In May 2019 alone, three churches in Egypt were closed after mobs protested and chanted against the presence of churches and Christians in their communities. Local officials have closed all three churches.

There are many rural villages—hundreds, by some estimates—with no church at all, especially in Upper Egypt, south of Cairo. In an interview, Bishop Macarios of Minya and Abu Qarqas, said that his diocese had about 150 villages and neighborhoods in need of a church or other religious building. Copts may need to travel to a nearby village with a church—though that church may not be large enough to hold them, and there have been instances in which Muslim villagers do not allow Christians from outside the town to attend religious services there.

In some cases, the state has closed churches that had previously been opened, with security agencies claiming that there are threats either to the Christian population or to communal peace. After the passage of the Church Construction Law, churches which had been meeting in homes tried to build their own buildings, but Muslim neighbors have objected to the obvious architectural features of a church—steeples, domes, crosses, and the like. Despite legal approval, and even judicial rulings in their favor, local authorities have blocked the construction, renovation, and restoration of churches.

The Official Gazette—the Egyptian government’s repository of laws and decrees—has not published any official decisions on the construction of new churches in Egypt, as confirmed by a number of Christian clergy in private discussions. This is despite the fact that a number of legal representatives of the Coptic Orthodox Church have applied for the establishment of churches in areas where Christians live and there are no churches. In theory, these applications should simply require the approval of the relevant governor after the fulfillment of the rest of the necessary conditions and approvals. The authorities have instead generally ignored the license applications, declining to either reject or approve them—despite the 2016 law’s obligation for governors to respond within four months, and to provide reasons in the case of refusal (Article 5).

This problem was expressed by the priests of the diocese of Samalut in the north of Minya province in an official letter addressed to the Minister of the Interior on January 10, 2019. The priests claim that they suffer in the practice of their religious rites and have a number of closed churches since 2006 and have approached the relevant authorities in Minya. They are still awaiting a reply to their entreaties to the local government and the authorities in Cairo.

State institutions have granted approvals to build churches in new cities after the allocation of land by the Ministry of Housing. President Abdel-Fattah El Sisi has instructed officials to provide land for the establishment of a church in the new cities, including the Cathedral of the Nativity in the new administrative capital. Despite the importance of allocating land for churches in the new cities, it remains a very limited step, and is more of a public-relations move. State institutions do not protect the right of citizens to establish places of worship near their places of residence, while churches spring up in the empty planned cities in the desert. The majority of Christians, like rural Muslims, belong to the middle and lower classes, and do not have the financial means to own residential units in the administrative capital and other new cities. The churches in the planned cities stand gleaming but largely empty, awaiting delegations from foreign governments and rights groups.

Since the law’s passage in 2016, the Egyptian Initiative for Personal Rights has documented 32 instances of sectarian violence associated with the practice of Christian religious rites. Some of these have closed existing churches, some occurred as informal churches sought to register themselves, and others blocked the construction of new churches. These incidents occurred across nine governorates, concentrated in Minya, Beni Suef, and Sohag. Of those 32 incidents, 26 resulted in the closure of churches in which prayers were being held—22 permanently, though four reopened. Two churches halted construction and have not resumed, two others moved, and in only two of the 32 cases did churches carry on as usual.

The sheikh of al-Azhar has spoken on several occasions about protections in Islam for Christians and Jews to build places of worship. The justice ministry’s religious law section, Dar al-Ifta, has issued fatwas stating that there is no legal text that prohibits the building of houses of worship in Muslim countries. But the prevailing Salafist mood plays a role in the increasing rejection of the existence of churches in some villages or the refusal to formalize them. An imam working Kom Lotfy, near the city of Samalut in Minya, argued in the newspaper al-Ahram in 2016 after an incident in which Copts’ houses were burned, saying that the violence was justified because there had not been a church in the village since at least the 1980s.

Some people reject the existence of the church for cultural and social reasons, and fear of changing the hierarchy of influence in rural communities. Some see that the Christian is not equal to the Muslim. As Coptic Orthodox, Coptic Catholic, and Protestant churches have increased their development, cultural, and recreational services, some locals fear the church’s growing prominence. While state bodies have spoken (if inconsistently) in support of Christians’ right to build churches and hold services, the security services have not acted to protect these rights, and politicians do not typically make these issues a priority.

Nearly three years after the Church Construction Law’s passage, the gap between official statements that the state is keen on citizenship rights and guaranteeing the religious freedoms of all Egyptians and the actual policies and practices on the ground has not closed or even significantly narrowed. Christian citizens still face obvious obstinacy in the practice of religious rites and legalization of existing churches. The law has failed to solve or ameliorate the Copts’ longstanding impasse.

In addition to its other defects, the law rests on the false assumption that Christian religious rites must be practiced in a church, which allows for the conflation of a prayer meeting or a religious celebration in a public or private space with prayers and worship in houses of worship. There is a distinction between the practice of religious rites—a right guaranteed to every citizen, as an individual or within a group, which can be exercised in any place—and the construction of houses of worship and churches, which are regulated by law. The right of individuals and groups to celebrate and observe religious occasions should not be restricted on the grounds that the site of the celebration is not a house of worship. The freedom to assemble for religious purposes, in homes or public places and without a permit, must be guaranteed. Aside from the theoretical problems, this viewpoint makes any Christian gathering in a village vulnerable to protest or assault on the grounds that it will be converted into a church.

The continuation of the current law will increase sectarian tensions, especially after the committee for the regularization of churches starts to conduct inspections to legalize unauthorized churches. If Egypt really wants to guarantee religious freedom, it should only regulate the building of houses of worship as far as general construction procedures, with no special law regulating the right to practice religious rites or, at the very least, a general law to regulate the construction of places of worship of all religions. Concurrently, the Church Reconciliation Committee will issue a single decision approving the authorization of all church applications submitted to it, regardless of the conditions being fulfilled.