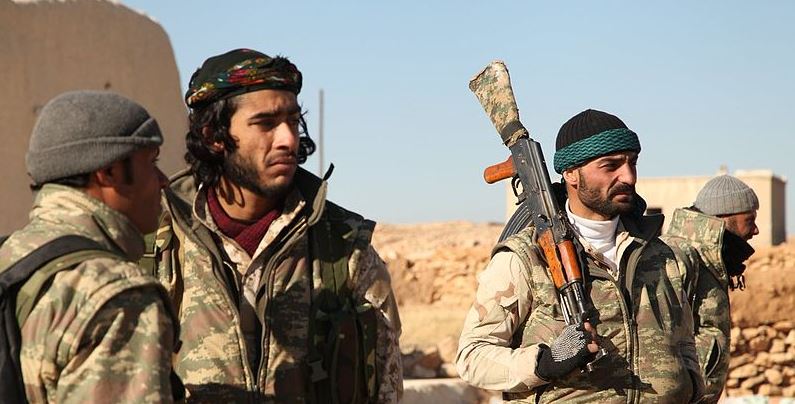 If you believe reporting coming out of the group’s capital in Syria over the past few weeks, Islamic State members are nowhere to be seen in Raqqa. American officials, local activists, and fleeing residents have claimed that many of the group’s leaders and those in charge of running the city either fled or disappeared, relocating to safe havens down the Euphrates river. While U.S.-backed Kurdish forces are advancing on Raqqa, and indeed gains are being made against the Islamic State on several fronts, it is important to accurately understand the scale and purpose of the group’s retreat. The group is still fighting fiercely for Raqqa and Mosul—the Iraqi military confirmed the group had shot down a military helicopter over western Mosul this morning—and its leadership is preparing for the next stage of its fight. Recognizing the steps taken by the Islamic State to ensure their survival is key to formulating and executing a strategy to counter them.

On March 2, 2017,the New York Times cited an American defense official as saying that some of the organization’s leaders had fled their stronghold in Raqqa as the battle to liberate it inched closer. Officials indicated that senior leaders fled into the borderlands of Iraq and Syria, in the only remaining Islamic State-held region straddling the two countries. The Financial Times reported on Monday that residents of Raqqa were speaking of “a kind of anarchy”—the religious police and municipality workers had halted their operations in Raqqa, with men smoking in public and women removing their full face veils. Omar, a local shopkeeper speaking from an internet café, told the newspaper, “I suddenly noticed they barely have a presence. There was no more hisba [morality police], and all their prisoners were released. The street cleaners, electricity workers, the zakat [tax] office — all of them had stopped.”

A third report on the subject was carried by the International Center for the Study of Violent Extremism. The authors, Asaad Almohammad, and Anne Speckhard, reported a similar trend. “More and more people were smoking in public. […] Our sources confirmed that ISIS cadres are rarely seen in the city. It was also reported that ISIS had shut down all of its directorates there. It seemed that civilians were beginning to experience some sense of normalcy with the absence of ISIS operatives at every corner.” The authors highlighted the growing significance of the city of Mayadeen, in Deir Ezzor, in the next phase of the Islamic State’s operations—for example, financial revenues gained in Raqqa, according to the authors’ sources, would be transported to Mayadeen. The authors concluded that the Islamic State might be relocating its “capital” to Mayadeen.

Almohammad and Speckhard also pointed to a circulating statement attributed to Prophet Muhammad that Islamic State supporters claim foresaw the upcoming fight in Raqqa. The hadith reads: “The Judgement Day shall not happen until the Euphrates recedes and reveals a mountain of gold. People will fight over it. Out of every hundred, ninety nine will be killed. Each man of them says: ‘May I be the one who survives’.” The hadith circulated after rumors that the Euphrates dam was damaged by American airstrikes and the flow of the river was affected. (The authors mistranslated the hadith as saying that only one of the 99 will be willing to fight in jihad, suggesting that Islamic State members were anticipating mass desertion.)

These reports shed light on critical aspects of the next chapter for the Islamic State after its expulsion from Mosul and Raqqa. The group’s moves, though, should be placed in context to understand what it plans to do in the next weeks and months and how it seeks to survive. First, relocation of administrative staff and senior leaders elsewhere is consistent with previous battles against the militants. But the number of moving personnel tends to be exaggerated by news reports. Only essential media and governance cadres would be relocated, along with women and families. Many of those in the police and municipality would join the fighting units if there is a battle happening in town, and some voluntarily join the “martyrdom brigades.”

A key flaw in the claims by local sources is the significance the Islamic State places on increasing, not decreasing, the monitoring of the population before battles for urban strongholds. A similar pattern was reported before the Mosul battle. The Islamic State has spent the past three years in Raqqa ensuring that no information about its movement, strength, and location leave such an important stronghold. This suppressive campaign, which included the graphic execution of dozens of suspected collaborators, made it extremely hard to know what happens inside Raqqa. That the Islamic State would allow internet cafes to function without monitoring as the enemy surrounds the city is open to doubt. The claims might simply mean that the Islamic State is now focusing less on policing its areas, which has been the case for several months. Smuggling routes, for example, are becoming easier to use, with the Islamic State unable to control who is fleeing its areas illegally as it did before. In the past few months, people in much of Islamic State-held territory have been able to smoke in small gatherings and in their homes, among trusted relatives, not in public spaces. Residents still feel the presence of the Islamic State and, as in some newly liberated areas, people will not openly defy the group’s edicts even after the militants retreat.

The second issue is the suggestion that the Islamic State might be prepared to desert the city. Everything we know about the group tells us that the militants will stand and fight in Raqqa, not despite but because American soldiers are joining the fight. Forcing the United States to deploy troops is one of the group’s propaganda themes. In September 2014, shortly after Operation Inherent Resolve began, the Islamic State’s spokesman at the time, Abu Muhammad al-Adnani, addressed President Barack Obama: “You claimed today that America would not be drawn into a war on the ground. No, it will be drawn and dragged.” American troops’ involvement is also a source of legitimacy for jihadists. Abu Qatada al-Filistini, known as an al-Qaeda ideologue and a critic of the Islamic State, wrote a post that circulated on jihadi social media, boasting about the prescience of his prediction that the U.S. would eventually deploy forces in Syria. The fact that the Kurdish YPG, the People’s Protection Units, will spearhead the fight, with the involvement of American troops, makes the Raqqa battle a godsend for the Islamic State, regardless of their definite military defeat, because it fits its propaganda and builds on local suspicion about the YPG’s expansion beyond predominantly Kurdish areas.

Third, Mayadeen is a vital city for the group but it is unlikely to be the center after the loss of Raqqa and Mosul. The reason is simply because the group has been building its “third capital” for many months, namely Wilayat al-Furat (or the Euphrates Province), the region that extends from west of Haditha in Iraq to the Syrian town of Hajin and includes towns on the two banks of the river. To be sure, Mayadeen will be an important city for the organization in order to protect its areas further down the river along the Syrian-Iraqi borders. Mayadeen will also be significant to maintain logistical networks linking the Syrian Desert and Iraq’s Jazira and Anbar deserts. But it is in Wilayat al-Furat where propaganda content appears to be handled more centrally than anywhere else in the fading caliphate. Videos often address themes related to the general state of the caliphate, including the first of nearly 20 coordinated videos to show solidarity to Wilayat Sinai in Egypt last May, and a recent one featuring Uighur fighters taking a jab at Turkistan Islamic Party, a rival Uighur faction in Syria aligned with al-Qaeda. Wilayat al-Furat is also where the Pentagon and Baghdad frequently report strikes which kill senior members. Other aspects of the group’s day-to-day behavior there, as reported by locals currently living there, suggest that area will be central to the militants’ fallback strategy, even if it will not be limited to the area itself.

If and when the Islamic State is expelled from Mosul and Raqqa, many of its fighters will regroup in this increasingly important border region. Such a scenario will further complicate the effort to defeat the militants in that region, for three reasons. The Islamic State considers the area vital for its long-term survival, and its fighters will be able to reassemble there to fight even more desperately; the terrain in and around Wilayat al-Furat is rougher and more remote for the various forces battling the group in both Iraq and Syria; and little investment has been made in local forces capable of taking and holding those areas, even relative to northern Syria.

A more prudent policy should consider the simultaneous opening of multiple fronts against the Islamic State, namely in northwestern Anbar, Deir Ezzor, and Raqqa. The Islamic State is exposed to attacks from the Syrian Desert, northwardly to Mayadeen and southwardly into Albukamal, which constitutes the Syrian flank of Wilayat al-Furat; and from northern and eastern Anbar, as well as southern Anbar from Jordan.

Such a multi-front attack by forces in Iraq and Syria, will preemptively work against the Islamic State’s strategy after the loss Mosul and Raqqa, and deny it a fallback base. This will also make it easier for relatively poorly equipped forces to fight it in the Syrian and Iraqi borderlands, since the Islamic State will be stretched thin. The jihadists will otherwise muster all its strength in Raqqa and later fight like a cornered animal in a region they know all too well and regard highly.

A forthcoming TIMEP paper by the author will examine the Islamic State’s fallback strategy, based in part on primary testimonies.