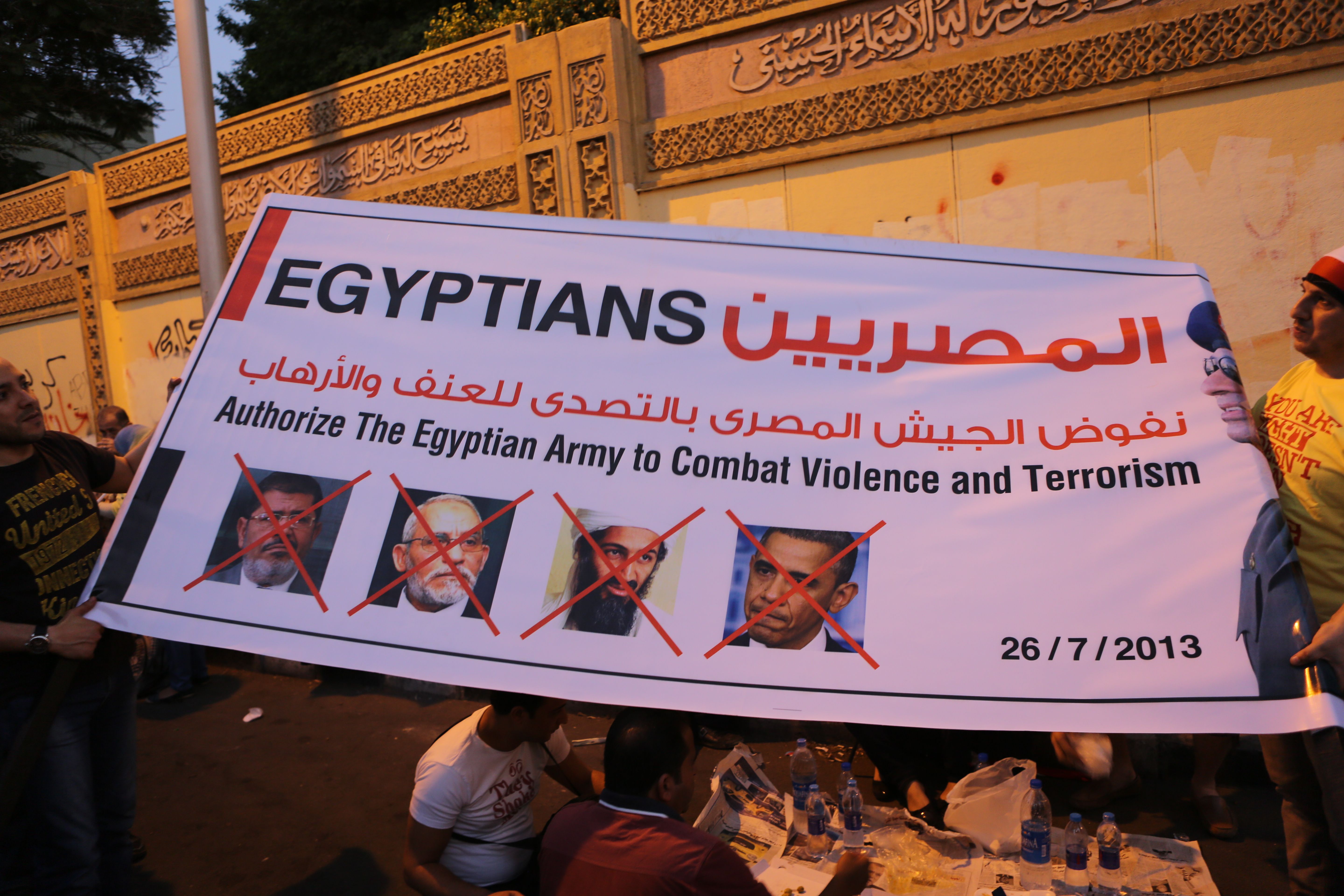 Thirteen years after the United States announced that it would conduct a “War on Terror”—leading to phrases like “Islamofascism” and the passage of legislation like the USA Patriot Act—the interim government, military, and media of Egypt have borrowed the term to embark on a similar endeavor. Much like the United States, which responded to legitimate terrorism-related security concerns after the September 11th attacks, Egypt has also been the subject of an extended period of instability, currently a result of the actions of elements of the Muslim Brotherhood (members of which remain angry after the ousting of former President Muhammad Morsi and have been implicated in violent attacks on Christian institutions) and the recent bombings in Egypt, claimed largely by Ansar Bayt al-Maqdis (ABM), that have largely targeted security personnel and the tourism sector.

However, much like the American War on Terror, Egypt’s War on Terror brings similarly significant challenges, some of which include the identification of the enemy, the realization and elimination of threats, and the long-standing debate on whether national security should come at the expense of human rights and civil liberties. With the Egyptian War on Terror emerges as a clearly coordinated campaign by government bureaucracy, media, and the judiciary, state authorities maintain a tremendously and effectively-unchecked freedom of action that threatens to extinguish the revolutionary spark that first ignited action for positive change in Egypt.

Since the dispersal of the Nahda and Raba’a Square sit-ins on August 14, the Muslim Brotherhood has organized almost-weekly Friday protests against the July 3 “coup” despite the fact that its prominent leaders have largely been detained. In spite of the apparent involvement of the group’s members in one of the largest-ever attacks on over 100 Egyptian churches and Christian institutions (occurring immediately after the dispersal of the protest camps), the Egyptian government did not act to formally designate the Muslim Brotherhood as  a “terrorist organization” until December 25. This action followed a deadly car bombing in Mansoura that was initially thought to have been conducted by the Brotherhood, though it was later claimed by ABM. The government designation effectively punishes anyone who joins or remains a member of the Muslim Brotherhood, participates in its activities, promotes its existence through any means, and/or funds its actions.

Since the designation, official government statements and the media have referred to the Muslim Brotherhood and the Freedom and Justice Party, along with all affiliate members, entities, and charities as “terrorists”; television channels run icons in the corner of broadcasts reading “Egypt fights terrorism.” Charged terms, like “treason” and “foreign funding,” litter the airwaves, and “you’re-either-with-us-or-against-us” analogies are used to rally popular support for government actions and to place blame on individuals and organizations even before the judicial process commences. The arrests of Brotherhood members and suspected sympathizers—and even those who simply speak up to defend the rights of people with whom they disagree politically—have also continued.

While there is no doubt that many Brotherhood members may be guilty of serious crimes, it is also true that the emotional rhetoric employed by everyone from television show hosts to government officials has sustained a widespread and popularly-endorsed crackdown against anyone involved in the group or unaffiliated individuals who speak up for human rights. This crackdown has included a campaign of arrests, torture while in detention, and virginity testing of Brotherhood-leaning university students and activists. It has also involved the recording of private telephone conversations between activists, the imprisonment of revolutionary icons such as Ahmed Maher, the raiding of NGO offices, and the detention of journalists like Mohamed Fahmy, who face serious charges, including “broadcasting false news” and “conspiring with a terrorist group.”

While all of the aforementioned actions are problematic to the extent that they presume guilt before a trial and blatantly violate civil liberties, the most worrisome aspect of Egypt’s War on Terror is the legal basis in which it is currently being enshrined. A November 2013 protest law expands the authority of the police to crack down on protests that take place without permits and infringes upon the ability of citizens to hold anti-establishment demonstrations; its exaggerated application quickly became clear following the violent response of the police to the Shura Council protest and the ongoing detention of Alaa Abdel-Fattah. The country’s new constitution, approved in January by 98.1 percent of voters (with a 38.6 percent national turnout), further expands the authority of Egypt’s state institutions and provides the military with expansive powers. In what may be the first of its kind in a foundational document, a “transitional” Article 237 even goes so far as to declare the existence of a “war on terrorism” and commits the state to “fighting all types and forms of terrorism and tracking its sources of funding within a specific time frame in light of the threat it represents to the nation and citizens[.]”

In the latest step in this legislative battle, a leaked version of a proposed anti-terrorism law under consideration by Egypt’s now-former cabinet indicates that the State intends to cast a wide net in order to control those who would challenge the mainstream, be they terrorists or not. The law broadly defines terrorism as the use of threats, violence, or intimidation to breach public order, violate security, endanger people, and/or obstruct public authorities and the implementation of the constitution. The law punishes those who establish, organize, or run terrorist organizations with life imprisonment or the death sentence. Heavy prison sentences are also set forth for those who join terrorist organizations, establish organizations meant to violate Egypt’s constitution, provide funding or shelter to terrorist organizations, partake in weapons training with the intent to commit terrorism, and/or work on behalf of a foreign country or join a foreign nation’s armed forces to partake in terrorism. Under the law, a special prosecution unit will be set up to deal with anti-terrorism cases, and criminal courts will begin to focus some of their branches on issues of national security. The law also enables expansive state monitoring of social media and internet sites, along with other censorship measures. While the terrorism law reads much like any piece of legislation with similar purposes, the reality is that in an environment of heightened tensions, a historical absence of the rule of law, and the historic tendency of the Egyptian State to interpret vague legal language broadly, the reality is that the anti-terrorism law will be used to silence and punish dissenters, be they terrorists or innocent, non-violent protesters.

Ultimately, Egypt’s proposed anti-terrorism law, new constitution, recent protest law, and other similar measures expand the authority of the State to crack down on whatever it chooses to define as an act of terror according to exceedingly vague language. These actions may only be the beginning of a legislative scheme through which authoritarianism will be further enshrined in legislation. While there is no doubt that the Egyptian nation faces serious threats, the evidence thus far shows that the State is willing to take disproportionate measures to eliminate unpopular or undesirable opinions in pursuit of stability.

Although the United States successfully apprehended and killed perpetrator Osama bin Laden and the country has not been the target of a terrorist attack domestically since 9/11, the reality is that the American War on Terror also brought a domestic crackdown on civil liberties, waning influence abroad and discontent with American foreign policy, a spike in hate crimes, torture scandals and prisoner abuse in Guantanamo and Abu Ghraib, the creation of a culture of fear, significant economic costs, and serious questions on whether Al-Qaeda has been weakened and whether “terrorism” can ever be truly defeated. The future does not bode well for an Egypt that attempts to model its War on Terror on similar tactics and thus, is bound to end up with similarly disappointing results. This leads to a realization that even the United States was slow to recognize: a crackdown on civil liberties and freedoms may contribute to a false sense of temporary stability, but it cannot solve all the problems that prompted it. Such crackdowns will not quiet the voices of dissent boiling underneath the surface, and it will most certainly not bring the democratic transformation, technological advancement, domestic and regional safety, and economic advancement that Egypt so desperately needs.