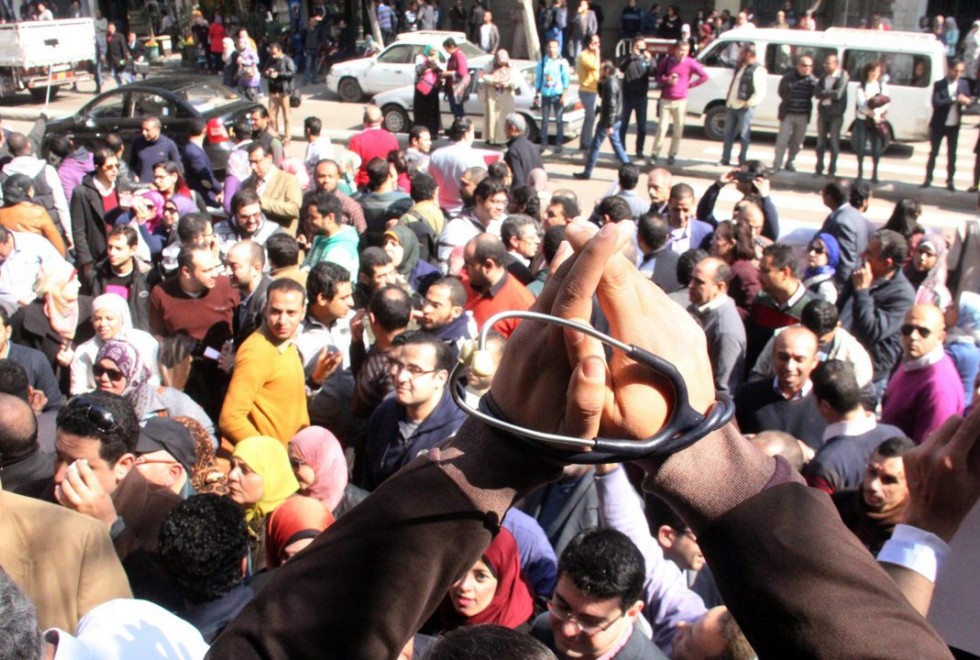 An ordinary general assembly of the Egyptian Medical Syndicate (EMS) scheduled on Friday, March 25, at the conference hall of Qasr al-Ainy Hospital, was cancelled with only 24 hours’ notice. The state-run hospital—Egypt’s oldest and most established medical teaching institution—cited maintenance work as the reason behind the sudden cancellation. The general assembly was moved to the union’s headquarters, Dar al-Hikma, but had to be rescheduled to April 8, as the syndicate is required to give its members a two-week notice of any changes for the assembly to be considered legal. With an ongoing conflict between the state and Egyptian doctors, represented by their syndicate, and with the independence of Egypt’s universities in question, it is not hard to understand why the EMS is facing such logistical hurdles to hold otherwise legitimate meetings.

The general assembly is intended as a follow-up to the historic gathering of some 10,000 physicians from across the country who answered the call by the EMS for an emergency general assembly on February 12. The unprecedented success of the meeting was a direct response to the government’s failure to address the violent assault by members of the police against two doctors at the Matariya Hospital in Cairo for refusing to issue a false report exaggerating a minor injury sustained by one of the policemen. In addition to their demand that the policemen be held accountable, the doctors’ union voted in favor of offering free medical services at public hospitals, demanded the resignation of the Minister of Health, and called for the introduction and implementation of laws that protect hospital staff against future assaults.

Hospitals in Egypt have for years been subject to attacks by angry patients and families, but such incidents have recently intensified in number and frequency. The Egyptian Center for Economic and Social Rights documented 72 cases of attacks against hospitals in 2015 alone resulting in some serious injuries to hospital staff and patients and at least 6 deaths. Rights groups have repeatedly called on the state to take measures to ensure the safety and security of hospital staff, which has also been at the center of demands of two short-lived doctors’ strikes in 2012 and 2014.

The Matariya Hospital attack was neither the first nor most violent incident in hospitals, nor was it be the first time police members used violence against citizens and gotten away with it. Why then, has it sparked greater outrage, not only among doctors but also among broader sectors of society? Perhaps doctors, who have thus far tolerated working in such an abusive environment, can no longer remain hopeful that their demands will be met when their attackers belong to the very institution that is supposed to protect them. The timing of the incident was also key, with an escalating wave of police brutality and impunity that is stirring familiar contempt among society at large. Similarly, while the state has been willing in previous cases to put up some pretense of prosecuting individual policemen, albeit rarely resulting in a conviction, it has thus far been adamantly unwilling to succumb to the doctors’ demands. Having zero tolerance for organized protests, the state has instead embarked on a national campaign to discredit the movement employing media to highlight cases of medical negligence, an issue which it had ironically ignored up to that point. And a recent cabinet reshuffle spared the minister of health, one of the main antagonists in the current conflict. And, of course, there is the state’s unsubtle crackdown on dissent in other facets of society.

Since 2011, doctors have positioned themselves as “enemies of the state” in many ways. During the initial days of the revolution—and in subsequent events that have witnessed violent conflict between security and military forces and protestors—doctors were present at the front lines to treat injured protestors, bearing witness to the excessive use of force. Medical personnel have documented and spoken out against such abuses and have suffered the consequences of what the state sees as taking a political stance, by being targets of violence or by facing prosecution. Today, al-Nadeem Center for Rehabilitation of Victims of Violence is facing closure by the government for reporting cases of deaths and torture of individuals in detention, reaching 600 cases in 2015. Doctor and union activist Taher Mokhtar, who has been concerned with health conditions in places of detention, was arrested shortly before the fifth anniversary of the January 25 Revolution and remains in detention. Finally, there is a global shift in the role of doctors from being merely healers to actors of social change, and this is true in Egypt as it is elsewhere in the world.  Where health is missing from the agendas of political leaders or parties, Egyptian doctors have taken on the responsibility of advocating for the right to health, asking for increased spending on health, universal health coverage, and health sector reform, bringing attention to issues which the government is not too keen on addressing.

The current conflict with the state also begs for a greater understanding of the role of the syndicate and some of the internal challenges its council is facing.  With Egypt’s rapid sequences of shocking events, the enthusiasm from the February assembly could soon be lost and forgotten unless the EMS addresses some of these challenges and thinks of ways to build and strengthen new alliances. Doctors are by no means a coherent group and there is an apparent gap between private and university doctors and what is often seen as a leftist council. The syndicate also needs to address the growing level of discontent among its younger members who often criticize the council for not following through with their decisions, which makes it all the more important to focus the syndicate’s energy on well calculated actions taking into account the political reality and how different actors will be affected. Finally, as doctors are stepping into their new role as health advocates, the syndicate needs to sustain public support by focusing on issues that matter to the people, most notably cases of medical negligence. There is a growing level of anger toward the health system that cannot be ignored or blamed entirely on the government’s failure to fix it. For doctors’ dire circumstances to be duly acknowledged, the syndicate will have to make more serious and visible effort to investigate claims of medical negligence and to integrate patients’ rights with their own.