The nature and timing of the rulings—which came less than a month before the upcoming presidential elections and at a time when the international community has focused intense scrutiny on Egypt to gauge its progress on a path towards democracy—have encouraged ample theorizing as to their significance, and commentary has been widespread in the news and on social media.

To gain greater insight into the implications of the day’s events, the Tahrir Institute for Middle East Policy (TIMEP) contacted one of Egypt’s foremost judicial experts. Negad el-Borai is a lawyer and human rights activist who has defendend civil society actors and activists and has been an outspoken opponent of corruption and government malfeasance. In January of this year, el-Borai announced his resignation from Egypt’s National Council for Human Rights (NCHR), an ostensibly independent organization designed to hold the government accountable for rights violations. El-Borai described his resignation as a “warning,” citing the NCHR’s continued incapacity to confront persistent human rights violations. The interview has been lightly edited for clarity. 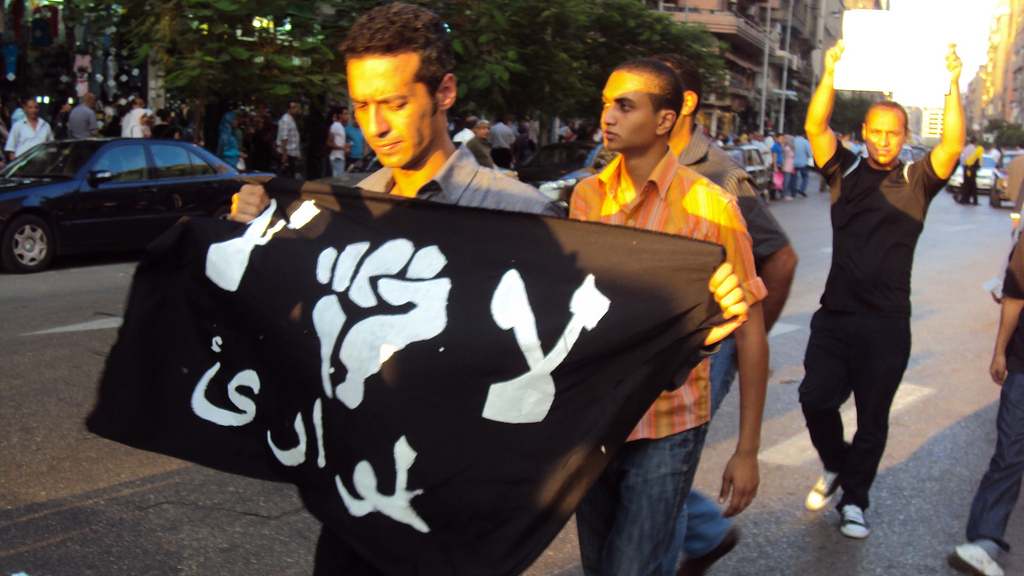 The injunction banning the April 6 Youth Movement (also referred to simply as “April 6”) was handed down by the Cairo Court of Urgent Matters. Although this is not a formal decree, the ruling is representative of mounting repression against the Movement. The movement has been one of the most vocal and well-known protest movements in Egypt, and it was instrumental in organizing the protests that led to the overthrow of Hosni Mubarak. Notably, Movement founder Ahmed Maher was arrested two months after a demonstration that called into question the integrity of Minister of the Interior Mohamed Ibrahim (Ibrahim has not left office since then),  On December 22, 2013, an Egyptian court sentenced Maher and fellow April 6 member Mohamed Adel to three years in prison and a hefty fine.

TIMEP: Today saw two concerning developments from the Egyptian judiciary: a court ruling banning the April 6 Youth Movement and the mass sentencing of Muslim Brotherhood supporters in Minya. Can you detail first what has happened with the injunction that came from the Cairo Court for Urgent Matters? In particular, was this an enforceable ruling or merely a temporary and symbolic one?

Negad el-Borai: Yes, the court published a verdict today against the April 6 Youth Movement to close all of their offices around Egypt and their bank accounts because of their activities, which the court considered to be against national security. This is not a temporary ruling [by nature], but is permanent [though still subject to appeal], and this means that the government must take some steps to implement this verdict.

NB: I do not know exactly … April 6 published a statement today and they said: “Our office is in the street.” Anyway, any office belonging to April 6 would be shut down according to this verdict.

I’m sure that they do not have any bank account under the name [of the movement], but perhaps the government – if it wanted to implement this verdict – could close all the accounts belonging to any persons known to be working with the April 6 movement, like that of Ahmed Maher.

In a statement, the April 6 Youth Movement declared: “We will keep going with our activities and views the way we want.” However, a similar ruling in September 2013 against the Muslim Brotherhood opened the floodgates for repressive measures; the recent cursory trials and mass sentencings in Minya may be the most perverse examples, but similar mass trials occur across the country with regularity.

TIMEP: This was the same type of injunction issued last September against the Muslim Brotherhood.

NB: It is from the same court and yes, it looks to be the same.

TIMEP: Is there a concern that we would see a crackdown against April 6 like the one we are seeing against the Brothers?

NB: Anything can happen. We are in a very difficult political situation; one that is very sensitive. I have no guarantee that the government would act wisely according to this verdict. But hopefully [we will not see that kind of repression].

While most analyses focused on the court injunction and mass sentencing as distinct incidents, some observers remarked that they may be signs of an increasingly politicized judiciary and a court system that is systematically neglecting the right to due process.

TIMEP: Taking this injunction at the same time as the sentencing of the Muslim Brotherhood supporters, do you think this indicates a politicization of the judiciary? Can we say there is an independent judiciary in Egypt?

NB: It gives us an indication that some judges like to be in the front pages of the newspaper. They want to be famous and they are taking the risk of issuing such an unbelievable verdict to show it.

TIMEP: So the sentencing is more the result of the action of one individual judge than it is representative of the larger judiciary?

NB: This goes beyond one judge, there are a lot of judges…some of them want to be in the media, or some of them believe that what happened on January 25 has led to a kind of chaos. Some [judges] believe it is time that this [chaos] is shut down. I don’t know that this gives us an indication that the judges are independent, but the judiciary in Egypt is very, very weak. We need a major change inside the judicial system.

TIMEP: What would that change be?

NB: Everything: the environment, the judges’ ability to interfere in the political system – it would need to be many things.

A Bleak Outlook for the Future

The recent release by the United States of Apache helicopters to Egypt both raised more pronounced notions that U.S.-Egyptian relations would be normalizing and led to heightened scrutiny of Egypt’s efforts to continue on a path to democratic transition. While Egypt’s Prosecutor General issued an appeal against the 37 death sentences upheld yesterday in the final phase of the prior mass trial of 529 in the same Minya court, the broader need for the kind of judicial reform that el-Borai described certainly paints an unwelcome picture of the courts’ ability to uphold fundamental freedoms. El-Borai also believes that the April 28 rulings have even broader significance for civil society as a whole:

TIMEP: In the instance of the April 6 injunction, is there a possibility for an appeal?

NB: This is a civil matter, not a criminal one, so the prosecutor could not initiate it, but April 6 or anyone belonging to the movement could file an appeal on behalf of the movement.

TIMEP: What do you see as the wider implications for civil society as a result of this injunction?

NB: Civil society now is in the middle of a real battle. Human rights violations occur every day and night. We have more than 20,000 people in prison; we have torture cases; we have terrorists bombing everywhere; and now we add this. I have great doubts that civil society can work on all these fronts at the same time. As such, these verdicts become very dangerous to civil society itself: the government could use the judges to close rights’ groups.

TIMEP: Do you think there is particular significance of these actions given the approaching presidential elections?

NB: No, it has nothing to do with the presidential elections. Two years ago, the SCAF started a campaign against April 6, and today was the day they closed the organization in Egypt.

TIMEP: Is there any cause for optimism?

NB: No. I always see the positive, but at this time I feel very sad and depressed at what is going on. I do not see how the new president can deal with all of this mess.