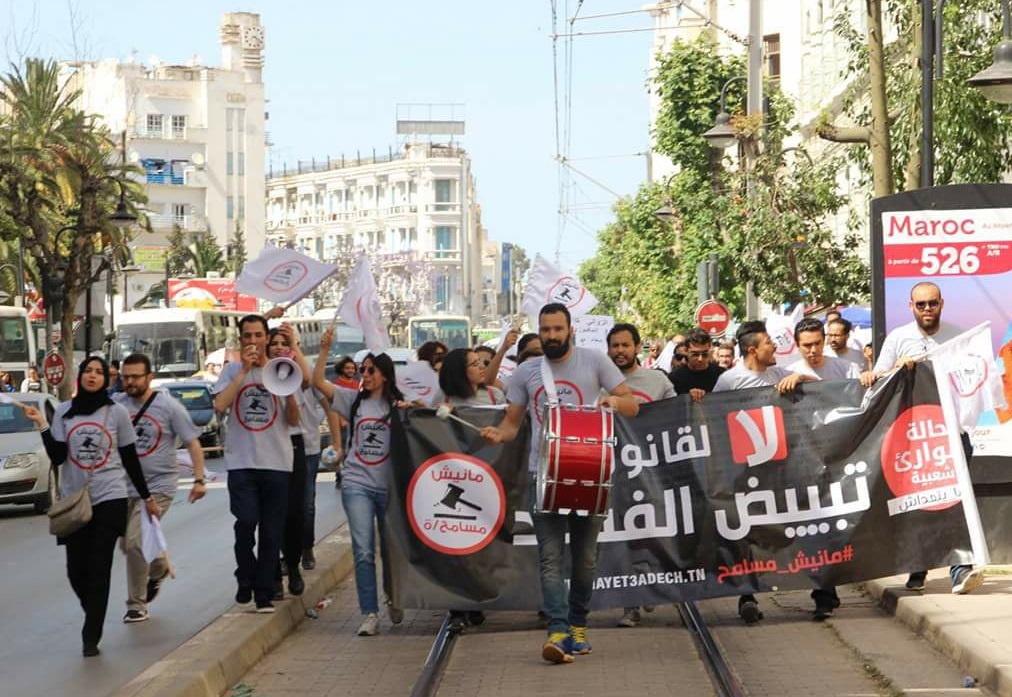 Protesters in Tunis march against the proposed Economic Reconciliation Bill in July 2017 (photo by Achref Aouadi).

As a member of Tunisian civil society who has worked to help the country’s democratic transition, nothing hurts more than feeling obliged to stop those who say its process of transitional justice is better than that of other countries in the region. Almost seven years after the eruption of Tunisia’s Jasmine Revolution, questions remain unanswered, wounds remain open, and the dream of a by-the-book transitional justice has been deferred. While Tunisia has made some strides in reconciliation and areas such as women’s rights, the country’s leadership has failed to truly unify Tunisians in the process of reconciliation.

Tunisia’s progressive achievements are in danger, with deliberate delays of parliamentary work causing the absence of a supreme court and the collapse of the independent commission overseeing elections. In the meantime, unconstitutional bills can be passed by a conspiratorial ruling coalition. As previously discussed, Tunisia’s presidency has disturbed the process of transitional justice for over two years. The finally adopted Administrative Reconciliation Act, which would provide amnesty to public officials for corruption and misuse of public funds, has been the sole project Beji Caid Essebsi has pushed forward since he became president following 2014 elections. After being reviewed by the Constitutional Interim Commission and ruled constitutional by the president, the act’s passage means that Tunisia will officially institutionalize impunity again by creating a parallel route for transitional justice with no guarantees of accountability.

Tunisia’s legislative and presidential elections of 2014 unofficially announced the end of the democratic transition, for it took the country back to the monopolization of power held by one party. The opposition did not realize then that the dying beast of the former autocratic regime was not yet dead, but manipulating unfortunate circumstances in its favor. Now, leftist and central-democrat movements understand the gravity of this mistake, and so do young activists who do not intend to repeat it.

While observers of the Tunisian scene had expressed surprise at the recent sabotage of the transitional justice process by the parliament’s adoption of the Administrative Reconciliation Act, this development should have been expected. The resignation of the chairman of the independent electoral commission under pressure and the initiation of debate of reforming the ruling model are among the signs that powers have again become recentralized around one party. Nidaa Tunis backs the head of the government, Prime Minister Youssef Chahed, and the majoritarian bloc in the parliament, while Essebsi is the party’s founder. With such a comfortable presence across the Tunisian governance model, and a historical truce with Tunisia’s icons of “moderate Islamism,” Nidaa Tunis has aborted all checks and balances in the plans the constituent assembly has laid out.

The historic public hearing sessions of the Truth and Dignity Commission, set up to oversee transitional justice and investigate human rights violations committed by the state, are seen as a huge leap in the reconciliation path, but obstacles stood in the commission’s way. The commission delivered only a partial image of the atrocities of the past, with some of the testimonies judged by commentators to be incomplete. To be fair to the commission, the Tunisian presidency denied the commission the access it demanded to the archives of the presidential palace. Essebsi held ministerial and high state positions in time of former presidents Habib Bourguiba and Zine El Abidine Ben Ali. Essebsi is now backed by his majoritarian bloc in the parliament, which is also composed of icons of Ben Ali’s Democratic Constitutional Rally, which have declared themselves opponents of the commission since its establishment and refused to attend any of its hearing sessions.

Now, with the election of a ruling party comprising recycled members of the former regime and the adoption of a reconciliation bill that will grant amnesty to public servants guilty of corruption, can we still talk about a democratic transition in Tunisia? While members of the political class do not promise much, their younger counterparts in civil society have so far been not only vigilant but vibrant and ready to lead the older politicians of the opposition, who have felt lost and hopeless. The last massive march called for by the Manich Msameh (I Will Not Forgive) movement was a display rarely seen in Tunisia or elsewhere of older opposition figures walking behind the young, emerging leadership of the protest movement.

Overall, if the results of the last legislative and presidential elections could reflect something, it would be that the average Tunisian citizen still does not feel included or appreciated in either the process of reconciliation or decision-making. Young, desperate Tunisians would rather take small boats to cross the Mediterranean instead of bearing another statement of the president and his prime minister. Dozens of boats full of Tunisian migrants were reported to have reached Italian shores, and dozens of others, if not more, sank in the deep sea. Meanwhile, a game is played out between the political machines, the instruments of propaganda, and the wealthy businessmen. Chahed wages his “war on corruption” every other day, he brings back figures of Ben Ali’s regime to key positions even within his cabinet, such as the new minister of defense, Abdelkarim Zbidi. Chahed freezes the assets of “corrupt” businessmen, and Essebsi greets them at Carthage presidential palace days later. This is all while austerity measures in Chahed’s 2018 budget threaten to place more pressure on the economic well-being of many ordinary Tunisians.

In the absence of the Tunisian External Communiciation Agency, the propaganda institution that was dissolved after the 2011 revolution, Chahed’s government has had to fight criticism of its austerity measures differently. The austerity measures do not cut officials’ high wages, lower the number of cars in their luxurious fleets, or reduce salaries of members of parliament for not showing up for their duties, but are instead a gradual lift of subsidies on certain food products and utilities such as water and electricity. While Tunisians might tolerate the return of the old regime’s figures for mere pragmatic reasons, they will not remain silent for long in the face of depravation. History has shown that major Tunisian uprisings were always linked to economic situations, as was the case during the Bread Riots that took place in 1984, with demonstrations against Bourguiba’s rule when subsidies on wheat and semolina were lifted. The current budget was met with such criticism that it led Chahed’s government to hire a German public relations company to represent it, according to a document leaked from a meeting of Chahed’s Republican Party.

On September 16, the ruling Nidaa Tunis coalition, backed by the Islamist Ennahdha movement, finally succeeded in passing a modified version of the Economic Reconciliation Bill that Essebsi pushed forward two years ago. This bill, now labeled the Administrative Reconciliation Act, was the first proposal suggested by the Tunisian presidency to the parliament, and Essebsi’s majoritarian bloc in the parliament defended it continuously for over two years, even holding a special parliamentary session during the summer parliamentary break. The decision to hold the session meant that the bill was voted upon without receiving the opinion of the Supreme Judicial Council, which viewed the bill as unconstitutional.

Less than 24 hours after the special session, the members of the parliament who joined the protesters outside the Bardo National Museum and boycotted the vote started gathering signatures for an appeal of the constitutionality of this law to the Interim Constitutional Committee. This raises the question of why Tunisia does not have a constitutional court, nearly seven years after the revolution and almost four years after the adoption of its new constitution. The answer is quite clear: This has never been a priority for the elected parliament and the ruling coalition of recycled Ben Ali regime members alongside Islamists who are grateful to have dodged the Egyptian scenario.

Tunisia’s hope of restoring the hijacked process of transitional justice and a real democratic transition was yet again aborted, at the hands of the Interim Constitutional Committee, an interim institution in absence of a constitutional supreme court. The committee, which examined the appeal of the Administrative Reconciliation Act, has been under pressure from the parliament, so the outcome of its deliberation was uncertain but predictable. The even number of members—six—leads to the return of any laws to the president for final say in case of a deadlock. In this case, Essebsi, who pushed this bill forward, will decide whether to approve it. The bill creates a parallel route for transitional justice, the path of which had been set and established a while ago. The most dangerous part is the absence of any measures for bringing the perpetrators to justice. It offers simply a general amnesty that would discourage honest and patriotic public servants from standing against corruption, since the worst of them could get away with it. In real life and out in the streets, most Tunisians may have given up on the hope of holding the icons of Ben Ali and Bourguiba’s regime accountable, including Essebsi himself, so that future generations do not have to face this again.

What can be learned from Tunisia’s experience following the overthrow of Ben Ali, the reelection of his party members, and the amnesty from his regime to his regime, is that the democratic transition probably cannot lead to democracy when it is too democratic: when many called for the ban of the former regime from rejoining the political life, permanently or for a few electoral cycles, most international and local organizations opposed this “undemocratic” measure. Today we are dealing with the consequences of tolerating the atrocities of the past and accepting with wide arms every criminal without a filtering process.

Babies who were born during the revolution time are now going to school, but with the beginning of the academic year, the average Tunisian was focused not on school but on news about next year’s budget cutting subsidies, which is being followed with great worry. As ordinary Tunisians are poised to be hit hardest by austerity, state corruption continues, amnesty is codified in law, and transitional justice is blocked.