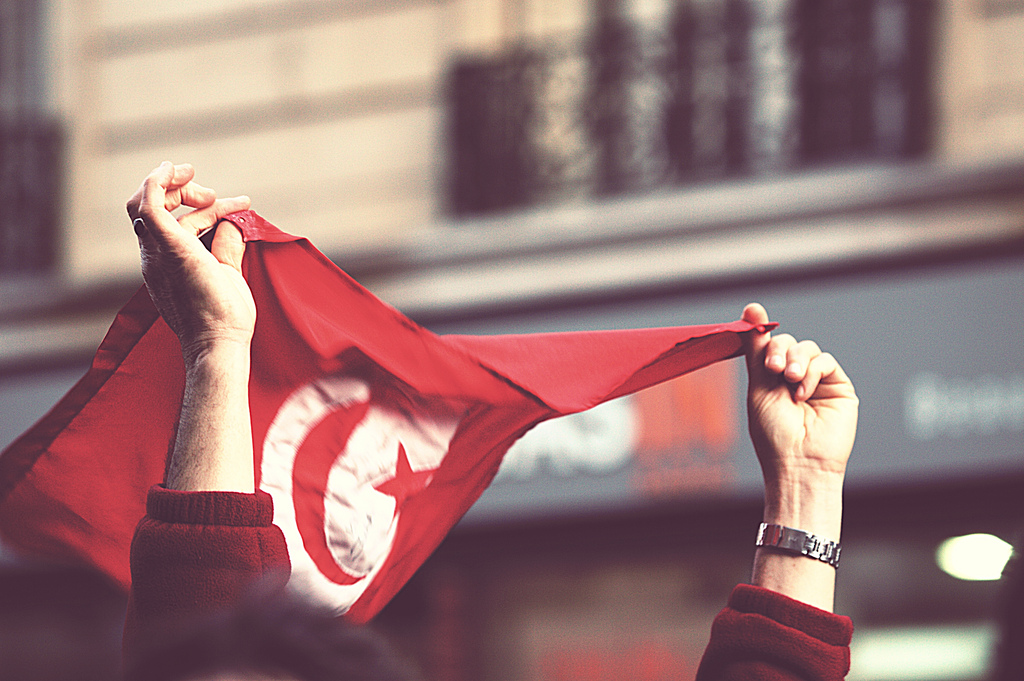 On December 10, Tunisia’s National Dialogue Quartet received the Nobel Peace Prize at a ceremony in Oslo, almost exactly five years after fruit vendor Mohamed Bouazizi set himself on fire in Sidi Bouzid on December 17, 2010, sparking the first revolution in the region. Tunisia is now widely praised for being the only Arab Spring state to have succeeded in its revolution. In Libya, Yemen, and Syria, chaos ensued, and a repressive system was reinstated in Egypt, but Tunisia wrote a new constitution and organized free elections. Nonetheless, many Tunisians do not feel included in the democratic transition and do not see any progress since the revolution.

The Crisis of 2013
Tunisia’s protests in December 2010 lead to the fall of Zine el-Abidine Ben Ali in January 2011. The bold move from Tunisians sparked a wave of revolutions that felled leaders in Egypt, Libya, and Yemen. Contrary to its neighbors, however, Tunisia had a relatively peaceful political transition. A democratic election was held in October 2011 and was won by the Islamist Ennahda (“Rennaissance”) movement. But things began to heat up in 2013, as opposition leader Chokri Belaid, a lawyer, was assassinated in February, as was fellow secularist Mohamed Brahmi in July. Tensions rose in Sidi Bouzid, Brahmi’s birthplace and cradle of the revolution. Violent protests erupted and quickly spread to the capital and around the country. Aziz Majoul, a young entrepreneur remembered attending protests near the Bardo National Museum in Tunis after Brahmi’s murder. “There were hundreds of thousands of people. It was the second political assassination, and people were determined to put the transition back on track. The political situation was extremely tense.”

Some were fearing Tunisia was at the edge of a civil war. The anger of Tunisian’s liberals was immense, as Islamists—specifically, Salafists affiliated with the radical group Ansar al-Sharia—were suspected of involvement in Belaid’s and Brahmi’s assassinations. A few weeks before, Tunisians watched as the Egyptian army toppled the unpopular Muslim Brotherhood. In Tunisia, the army is far weaker. But the stronger Tunisian civil society pushed for action.

Islamists from Ennahda—which is affiliated with the Muslim Brotherhood—feared the same fate as its Egyptian counterpart. In order to prevent deeper anger and wider demonstrations, the secular opposition and the Islamist ruling party agreed to dialogue. Four key components of civil society came together: the Tunisian General Labor Union (known by its French acronym, UGTT), the Tunisian Confederation of Industry, Trade, and Handicrafts (UTICA), the Tunisian Human Rights League (LTDH), and the Tunisian Order of Lawyers.

The Quartet began to work on the road map in July 2013, and the parties came together in September. Rached Ghannouchi, leader of Ennahda, met in Paris with Beji Caid Essebsi, the leader of Nidaa Tounes, the secular opposition alliance composed of leftists and former regime figures. Prime Minister Ali Larayedh, an Islamist, stepped down in January 2014 to make way for Mehdi Jomaa, an engineer and former minister of industry. A new constitution was adopted, and a new parliament was elected. In December 2014, Essebsi, who had been in government under the former authoritarian regime, was elected president and a new government was formed.

When it recognized the Quartet’s work, the Nobel Committee said, “More than anything, the prize is intended as an encouragement to the Tunisian people, who despite major challenges have laid the groundwork for a national fraternity which the Committee hopes will serve as an example to be followed by other countries.”

Amira Yahyaoui, an activist and co-founder of al-Bawsala, a non-governmental organization, agreed that the prize is an encouragement. “The quartet is national only in name; not one Tunisian was aware of the discussions behind closed doors. No one knew who [Jomaa] was….Some people who got the Nobel do not even talk to each other anymore. But the important thing is that groups with very different opinions managed to come out with a peaceful plan. And I’m proud of that.”

Sayida Ounissi, a member of parliament with Ennahda, was in Washington in November to receive an award from the National Democratic Institute, along with three other Tunisian leaders. She said that the Nobel recognition “sends the message to our neighbors that dialogue is key.”

Tunisians fear abuses in the name of counter-terrorism

Tunisia faces several challenges to the application of democracy, notably terrorism and the state’s fight against it. Deadly attacks have multiplied this year: 20 people were killed at the Bardo Museum on March 18, 38 tourists were killed on the beach at Sousse on June 26, 12 members of the Tunisian Presidential Guard were killed in the capital when a suicide bomber attacked their bus. A young shepherd was savagely beheaded in November by an armed group who pledged allegiance to ISIS. According to a recent assessment by UN experts, Tunisia has sent some 5,500 fighters to regional conflicts, like Syria and Libya; that number is the highest per capita rate in the world.

The poor social and economic situation and the humiliations many families faced during Ben Ali’s rule can partly explain the phenomenon; many fighters were radicalized in the old regime’s prisons. But the flow of jihadists is also a result of the revolution:  Islamists have been released from jails and are free to travel. With freedom of speech, radical Islamists have been preaching violence in mosques. The harsh measures of the former regime—including collective punishment for the families of jihadists—are gone, and the number of fighters is increasing.

After the presidential guard attack, a state of emergency was declared by Essebsi, for the second time in 2015. Human rights defenders fear that the country will take a step back on human rights while fighting terrorism. In a December 2 report , Amnesty International stated that since November 24, “At least 1,880 raids have been carried out across the country and at least 155 people arrested on suspicion of belonging to terrorist organizations. […] Some were beaten during transfer to the police station for questioning.” Freedom of the press—the “biggest achievement of the revolution,” according to Majid—is also endangered. In a report, Reporters Without Borders announced that more than 30 journalists who tried to cover the presidential guard bombing “were attacked physically or verbally by the security forces.” One of the Nobel Peace Prize recipients, Abdessatar Ben Moussa, confessed after receiving the award that he was worried. “Some voices say that if there’s terrorism, you have to put human rights aside.”

Deep Disenchantment Among the Population

Tunisia’s economy is in a terrible state. Tourists have deserted the country after repeated terrorist attacks. In the last years of the dictatorship, the growth rate was between five and six percent; in 2015, it was one percent. Tunisians have been disappointed by a lack of international economic support. While they were hoping for their own version of the Marshall Plan, the U.S. government allocated only $87 million in fiscal year 2016.

Many Tunisians feel that promises of the revolution have not been fulfilled—youth unemployment has increased, the security sector has not been reformed, the flagrant inequalities have not diminished. Youth living in the densely populated ghettos of Douar Hicher and Ettadhamen, outside Tunis, are disappointed, feeling that politicians serve only their own personal interests, and cite bribery and suppression of dissent as particular areas that have not improved. Nine in ten youth believe things have either deteriorated or not changed since the revolution.

In these poor areas, Islamist ideology is rising. A third of respondents cited Salafism as a defining feature of their neighborhood after the revolution, though no one rated this as a defining feature before the revolution. Most of the young Tunisians who began the revolution came from poor backgrounds, they had nothing to lose. As the young people are disenchanted, so too are the activists, with the return of much of the former regime—including Essebsi—in the current government. While Nidaa Tounes has a stable majority in parliament, it does not need to continue the dialogue with activists. Amira, the daughter of the late opponent judge Mokhtar Yahyaoui described the current situation as “catastrophic. The activists are extremely angry. The one who govern us have nothing to do with the revolution. We always say that the people get the government they deserve; well, it is very frustrating to know that this is what we deserve.”

Where Does Tunisia Go from Here?

Tunisia is still searching for its economic model. Aziz Majoul says that national unity works around some themes like sovereignty and the war on terror but that the debate is still ongoing on social and economic matters. While the Businesses Confederation leader Wided Bouchamaoui, one of the Nobel laureates, urged the international community to help the country with economic assistance, Majoul thinks that Tunisia should also focus on restructuring its economic system by reducing bureaucracy and formalizing the informal sector. Others focus on setting up social and economic safety nets like pensions and minimum wages.

In the south, Tunisia is desperately trying to control its border with Libya, which has become an open-air weapons depot. Tunisia’s army and contractors are building a barrier along part of the country’s border with Libya to try to keep out extremists. But as long as there will be a massive anger and hopelessness among the youth, it will take more than a wall to halt growth of extremism.

Wafa Makhlouf, one of the founders of Nidaa Tounes and a parliamentarian, tries to remain positive. Recently in Washington, for the NDI award ceremony, she assured the crowd that “Tunisians are builders.” Herself a businesswoman, she sees the economy as a factor to reenergize Tunisian civil society and to give hope to young people. “Social entrepreneurship is key to stability in our fragile democracy,” she said.

But many think it will take a long time before Tunisia becomes, indeed, a success. Amira says that a second revolution might be looming on the horizon, but this time she is not sure she will be ready to die for it. She thinks that Tunisia is going through a very difficult period, but that it is necessary for the people to learn of their mistakes, and that the country should learn to respect the dignity of people.

Tunisia has been a leader in the region, first in deposing its dictator andthen, through civil mediation, taking steps toward political pluralism. Despite its advances toward democracy, five years after Bouazizi set himself ablaze, many of the underlying issues remain. Local actors continue to take steps to develop the country economically and socially, but weariness and fear prevent substantial changes from occurring. The Nobel Prize signaled international support for Tunisia’s democracy, and the global community needs to continue to encourage a secure, prosperous, and free Tunisia.