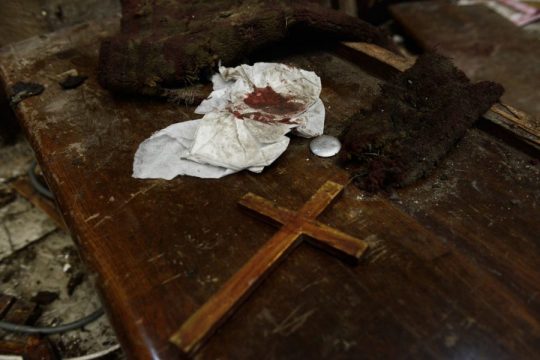 The aftermath at the chapel following the explosion. A bomb exploded in a chapel inside the Coptic Orthodox Cathedral of Abbasiya in Cairo, Egypt on December 11, 2016 leading to the death of 25 Christian Egyptians. Photo by Jonathan Rashad.

On Sunday, St. Peter and St. Paul Coptic Orthodox Church in Cairo’s Coptic cathedral complex was bombed, killing 29 and wounding four dozen others in an attack claimed by the Islamic State. The government charged with protecting Egypt’s Christians and bringing the perpetrators of this bombing to justice is the same government who looks down on Christians seeing and treating them as second class citizens. Christians in Egypt are left to depend on people who actively oppress them while using them and their suffering as pawns in their political maneuvering at home and abroad. Ultimately, what comfort can that really offer?

The sectarianism faced by Egypt’s Christians is sadly not relegated to a fringe in our society. While the vast majority of Egyptians rightfully condemns the murder of 25 worshippers at Sunday mass, other beliefs are pervasive, beliefs that perpetuate sectarianism throughout society and have been behind a majority of the violent sectarian attacks throughout the country. A majority of the country does not even accept that Christian citizens should have the right to build houses of worship as easily as Muslims can build mosques. This basic form of equality has been deeply controversial. The church building law passed in September maintains a set of rules and regulations for any sort of renovation and construction of a Christian house of worship, rules that mosques do not have to comply with. The different standards—and in the case of Christians, the more restrictive standards—drive structural and state-sanctioned inequality.

So when the state sets sectarianism as its example, it’s hardly surprising that society follows suit. Indeed, sectarian laws surrounding church building have been used as a pretext by vigilantes in rural areas to justify their attacks on Christian places of worship, whether they are private homes used to host prayers or churches seeking to renovate or repair their premises. Attackers often cite the restrictions on church building when defending their actions. The perpetrators frequently escape criminal prosecution, through either the use of reconciliation councils or through overall impunity.

Reconciliation sessions are held, in which community leaders meet to discuss a resolution. At best, Christians receive some monetary compensation for the crimes committed against them; at worst, they are banished from their community as a gesture to “relieve tension” or for their own protection. These meetings are organized and presided over by state and religious officials. The state itself, however, avoids using its legal system and giving Christians access to legal recourse in confronting those who attack them.

Other violence is based on religious personal status laws. Islamic law takes supremacy over Christian law on personal status questions, so if a Muslim man and Christian woman wish to marry, the law will recognize them and their union (as it should). This is, however, not due to respect of individual rights but to the fact that Muslim men, under Islamic law, are permitted to marry Christian women. However if a Muslim woman wishes to marry a Christian man it is expressly illegal. And many of these relationships, or even rumors of these relationships, have sparked mob violence against Christians. Once again the laws of Egypt serve as a pretext for sectarian violence and is often met with the same use of reconciliation councils and limited use of the courts, undercutting the legal rights of Egypt’s Christian citizens.

At the same time, the state regularly will highlight terrorist attacks on Christians to cast itself as the defenders of Christians in Egypt, with the Coptic Orthodox Church willingly supporting this protectorate. Egyptian officials often raise sectarian attacks in discussions with the media and governments abroad as proof of the continued terrorist threat to the country. They use it to justify its overbroad crackdown and repression, with little regard to the collateral damage when it frequently targets those who are unrelated to any act of violence, never mind terrorism.

That said, on some level, this paternalism between the state and the people applies to all Egyptians. The condescending fashion with which the state engages public opinion and questions of rights while more intense in reference to Christian Egyptians ultimately applies to all Egyptians. Until Egyptians set aside differences of personal faith and demand rights on the basis of equal recognition and respect as citizens, the sectarian tensions that flare up in Egypt will remain with us.

The state’s social contract is effectively a proposition in which Egyptians, regardless of their faith, are asked to accept hardship, repression and even abuse in exchange for a modicum of safety that is visibly absent on days like this past Sunday as well as some cheap sugar and bread. In Egypt, citizenship isn’t a foundation for demanding rights. Rather, it is a record for who the state can control.