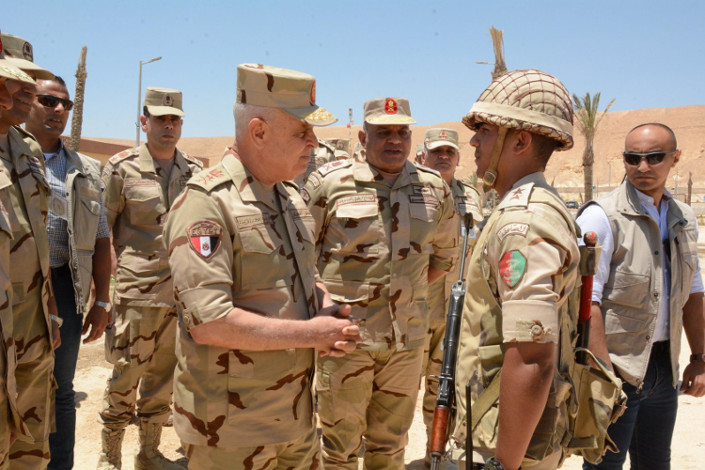 In a country in which transitional justice has been scoffed at as a secondary concern and in which the legislature has failed to pass a transitional justice law despite a constitutional requirement to do so, many observers found it ironic when Egypt’s House of Representatives preliminarily approved on July 3 a draft law that would grant amnesties to a designated cadre of high-ranking Egyptian military officers, effectively co-opting and politicizing the concept of an amnesty—one of the most controversial mechanisms of transitional justice. The draft law, which was reportedly submitted by the cabinet just one day prior, was sped through the parliamentary process and now awaits a final vote by a two-thirds majority.

Transitional justice literature defines amnesties as “measures that have the effect of barring future criminal prosecutions … against certain individuals or groups for specific criminal conduct committed before the amnesty’s adoption.” Although proponents of amnesties explain that granting amnesties to certain perpetrators can help assuage their fears of prosecution and thus bring about immediate peace in a society, others disagree. In previous cases, less-than-ideal amnesties have granted the victors emerging from a conflict or political transition protection from prosecution, while failing to afford the same to others; have taken place in a vacuum and alongside no other transitional justice tools that would allow victims to achieve the justice they seek via an alternative mechanism; and have been blanket in nature, potentially creating a culture of impunity for even the most serious crimes under international law.

Egypt’s new draft law threatens to do just that. The legislation, formally called the Draft Law Governing the Treatment of Certain Senior Commanders of the Armed Forces, empowers the president to designate a group of high-ranking military officers with lifelong reserve status, granting them the benefits and rights afforded to a sitting minister, as well as any other rights decreed by the president or set forth by other pieces of legislation. Most importantly, however, the draft law protects the designated group of military officers from prosecution for all acts committed during the course of duty or as a result of it during the period of time between the suspension of the Egyptian Constitution in July 2013 and the first convening of the House of Representatives in January 2016. When traveling abroad, the designated group of military officers are also afforded the immunity enjoyed by heads and members of diplomatic missions.

When initially submitted by the cabinet, the draft law defined the period of immunity with specific dates: between July 3, 2013, and June 8, 2014. After being marked up by a joint parliamentary committee, however, the new draft amended this protection to a longer and more descriptive time period, that between the constitution’s suspension and the seating of parliament—that is, between July 3, 2013, and January 10, 2016. This period includes a number of prominent events in modern Egyptian transitional history, including the Republican Guard clashes, the dispersals of the sit-ins Raba’a al-Adaweya and Nahda Squares, and numerous reports of extrajudicial killings amid a lengthy “war on terror.” Per the draft law, the president will be empowered to designate a group of military officers with lifelong reserve status without any specific guidelines on who is eligible for designation and without limitation on the frequency with which he can announce a designation; he thus enjoys the ability to pick and choose officers who are loyal to him, while potentially leaving others to fall on their swords if necessary. Once a designation is complete, any officers who are protected by it will enjoy lifelong immunity for the violations they may have committed during one of the country’s most significant transitional periods. More specifically, for example, a high-ranking officer who may have otherwise been held responsible for authorizing the dispersal of the Raba’a sit-in will never be held accountable for the murder of Egyptian citizens—even if these murders would have constituted serious international crimes. Instead, he will be revered for a lifetime, afforded the benefits of a sitting minister, and protected by diplomatic immunity as he travels abroad.

Amid criticism, the bill’s proponents have framed it not as a justice mechanism, but rather as a tool meant to honor members of the country’s armed forces for their contributions to and sacrifices for Egyptian society. From a legal perspective, however, the impact of the draft law is undoubtedly clear. First, it establishes a selective and arbitrary type of amnesty. Rather than grant amnesties for all non-serious crimes perpetrated by both civilian and military actors for a specific incident, it instead protects only members of the military—considered to be the “victor” emerging from Egypt’s transition—and grants them protection for a lengthy two-and-a-half-year period during which many human rights violations were observed. A number of these violations were perpetrated by the country’s armed and security forces. Second, the draft law exists in a justice vacuum, at a time when prosecutions for violations by former government and security sector officials have been limited, when fact-finding committees have tended to absolve the government of any wrongdoing, and when those who express alternative narratives have been silenced. Third, the draft law fails to carve out any exception for serious crimes. To create a culture of impunity around some of the most serious human rights violations that the country has witnessed in its modern transitional period—the Raba’a sit-in dispersal, for example—is to fail to provide justice for a significant portion of the population and leave unresolved one of the most important matters that would naturally be at the heart of any future reconciliation efforts.

Disregarding Egypt’s constitutional obligations to protect citizens from discrimination, uphold equality before the law, and protect the rights of victims to litigate, it is unclear how an amnesty of this type, one which fails to recognize previous crimes committed and does not provide victims with a space to achieve any form of justice, can do the country any good. From the Hosni Mubarak regime to the current government of President Abdel-Fattah El Sisi, there is no doubt that Egyptian authorities across the board have never prioritized justice for the country’s victims. What additionally becomes clear with this new draft, however, is that Egyptian authorities are also willing to co-opt the principles and mechanisms of justice, politicize them in application and effect, and repackage them in a framing in which the issue is no longer one of justice, but of honoring the armed forces. In a country with a highly patriotic citizenry characterized by a deep sense of commitment to its military, this draft law is a remarkably easy sell. But as the country’s parliament writes into law a culture of impunity for crimes committed by the armed forces, Egyptian authorities continue to write incidents out of children’s history textbooks; silence nongovernmental organizations, journalists, and individuals who maintain an alternate telling of events; and set forth an institutional culture that collectively eats away at the mechanisms of accountability. It is thus only natural that hopes for reconciliation among the country’s broken society will become even more elusive, and unresolved tensions exacerbated by a deepening sense of injustice will continue to build.