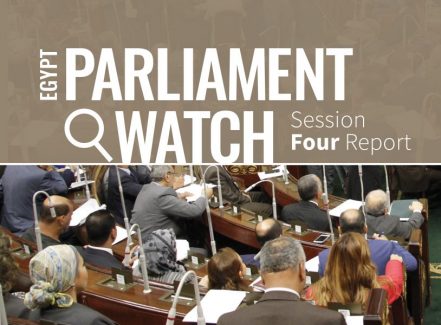 When Egypt’s current legislature gathered under the dome of the parliament building on January 10, 2016, the country completed the final step in its “democratic road map.” But simply convening as a parliament does not necessarily mean that the body is truly engaging in democratic practice; further analysis is necessary to examine the function of the parliament and the ability of members to uphold their sworn oath to respect rule of law and the interests of the Egyptian people. Thus, the Tahrir Institute for Middle East Policy (TIMEP) launched its Egypt Parliament Watch project to assess the performance of Egypt’s unicameral parliament, embodied in the House of Representatives, and the quality of the legislation it produces.

This report serves as the fourth full session report in the ongoing project. Along with the others in the Egypt Parliament Watch series, it provides analysis on the parliament with sections on parliamentary performance and legislation, along with appendices detailing a timeline of the fourth session and the report’s methodology.

This section reviews the parliament’s performance based on four key indicators, describing relevant developments and providing analysis and areas of concern.

Checks and Balances: Was the parliament able to act as an effective check and balance to the executive, the judiciary, and other state institutions?

In line with TIMEP’s previous legislation tracker project, this section provides an English-language register of laws passed by parliament during the session. Additional detail on prominent laws is available via the TIMEP Law Briefs, a separate output which complements this EPW report. 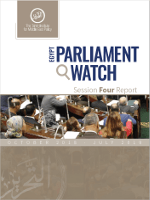