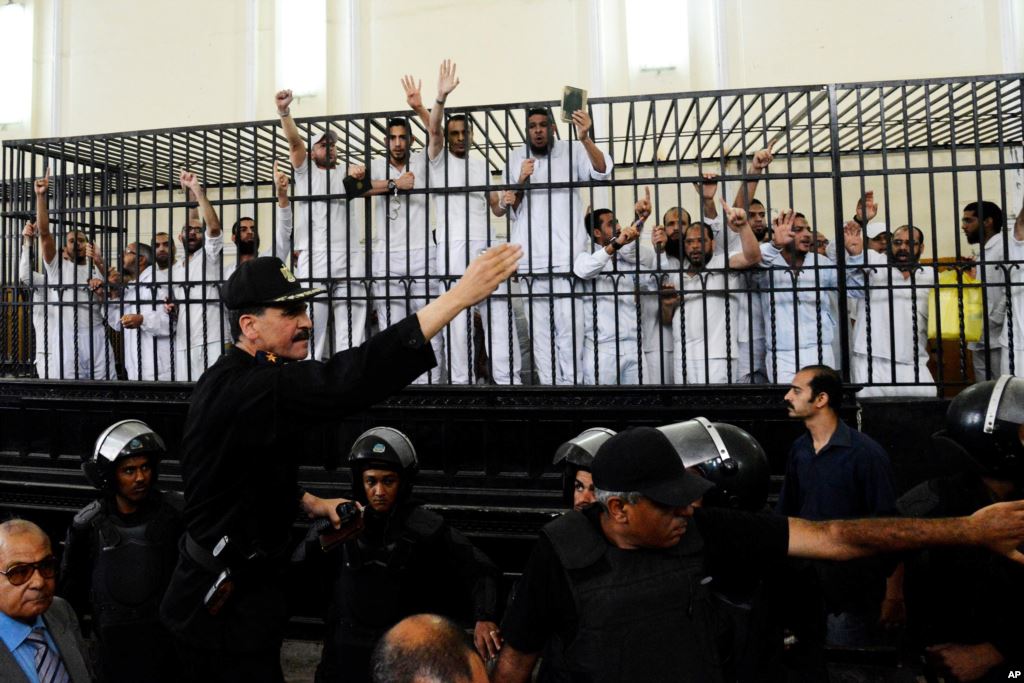 The recent sentencing of Al Jazeera journalists to prison for charges related to terrorism cast Egypt’s judiciary into the spotlight yet again. This case, along with the continuous mass-sentencing of alleged Muslim Brotherhood supporters, has observers wondering how a truly independent judiciary could offer such harsh sentences for those who have not been proven to carry out any violent terrorist act. A look at the development of terror legislation in Egypt reveals some highly problematic loopholes that have allowed for possible violations of Egypt’s international rights’ obligations.

Egyptian anti-terror laws have been on the books for decades: Responding to the spike in terrorism in the 1980s, Egypt renewed its state of emergency and issued orders authorizing the imprisonment of “anyone against whom there is credible evidence or is under suspicion of any activity that compromises public security or public order or threatens national unity or social stability.” Shortly thereafter, the country passed its first formal piece of anti-terrorism legislation when it amended its Penal Code, Criminal Procedures Code, and other relevant laws to formally introduce terrorism as a crime through Law No. 97 of 1992. In 2006, Decree 477 was issued to set up a committee to create a stand-alone piece of anti-terrorism legislation; while drafts were introduced over the years, no independent law was ever ratified by this committee. In March 2007 however, the Constitution of 1971 was amended to incorporate Article 179 that set forth a constitutional obligation to combat terrorism, giving the government free rein to crack down on anything it deemed to be terrorism, without respect for human and civil rights.

Since the ousting of former President Muhammed Morsi, talk of introducing new anti-terrorism legislation has surfaced; in September 2013, a draft bill was produced but not ratified. In April 2014, a new law and amendments to the Penal Code were approved by the cabinet and sent to interim President Adly Mansour for ratification. For reasons not yet clear, both pieces of legislation were sent back to the Ministry of Justice by Mansour; at this point, the legislation has neither been passed nor signed into law. The draft laws, rejected by most non-governmental organizations, had incorporated a significantly broader definition of terrorism. Additionally, these included provisions setting forth the establishment of a special terrorist crimes prosecution unit and specialized criminal courts, making it an offense to disseminate media that appears to support terrorism, escalating the prescription of the death penalty, and allowing authorities to hold detainees while depriving them of their due process rights.

As the legal scheme currently stands, Egypt’s Constitution commits the state to fighting all types and forms of terrorism and tracking sources of funding; Article 237, which governs the matter, is a transitional provision that sets forth the law as the ultimate source for the provisions and procedures necessary to fight terrorism. In the Penal Code, Article 86 broadly and vaguely defines “terrorism” as:

“any use of force or violence or any threat or intimidation to which the perpetrator resorts in order to disturb the peace or jeopardize the safety and security of society and of such nature as to harm or create fear in persons or imperil the lives, freedoms or security; harm the environment; damage or take possession of communications; prevent or impede the public authorities in the performance of their work; or thwart the application of the Constitution or of laws or regulations.”

The Article, considered to be the most central piece governing counter-terrorism legislation, also increases the number of crimes punishable by death (including attacks on the security of the state and the provision of weapons, ammunition, explosives, materials, instruments, funds, or information to groups, gangs, and other terrorist formations), raising potential violations to the International Covenant for Civil and Political Rights (ICCPR) which prohibits capital punishment for new offenses.

Various other articles throughout the country’s Penal Code also reference terrorism ((See Articles 86-102 (considered to be the bulk of Egypt’s anti-terrorist legislation), as well as Articles 124, 160, 162, 174, 219, 220, 234, 236, 240-243, 361, and 375, all of which also explicitly reference terrorism.)) and set forth circumstances in which terrorist acts or non-terrorist acts committed with a terrorist intent (including the destruction of public buildings, the creation of organizations that upset the social and economic systems of the state and incite hatred towards it, the encroaching upon public officials’ rights, the perturbing of religious ceremonies, the instigation against and attempts to overthrow the rule of law, and the murder and/or injury of individuals) are punished to various extent with capital punishment, hard labor, and prison terms. Other prominent features of Egypt’s anti-terrorism legislation include regulating the activities of political parties (going so far as to mandate and prohibit the possession of certain publications), increasing the amount of remand and provisional detention time, allowing police to detain citizens without pressing charges for up to tens of days (and thus denying them the right to a lawyer during this time), and subjecting minors between the ages of 15 to 18 to the same treatment as adult suspects above the age of 18.

In December 2013, the government issued a decree declaring the Muslim Brotherhood a terrorist organization. Under the decree, anyone who is a member of the Muslim Brotherhood, participates in its activities, promotes, or funds the group is subject to the Penal Code. Because the Brotherhood is formally a terrorist organization, anyone “found to be a member” will be tried as a terrorist; the recent designation may explain why judges have had the authority to issue harrowing verdicts like the mass execution sentence in the recent Minya trial. The protesters, who were ultimately charged with the killing of a police officer, were also found to be Muslim Brotherhood members and thus subject to heightened penalties as “terrorists” under the Penal Code. Recent court verdicts and political statements have explicitly put Ansar Bayt Al-Maqdis, Ajnad Misr, Hamas, and Hezbollah into a similar “terrorist” category, although absent a formal decree like the one issued for the Brotherhood, it is unclear the degree to which judges will apply the terrorism-related provisions of the Penal Code to suspected members.

Ultimately, as it currently exists, Egypt’s anti-terrorism legislation raises serious questions about the due process rights of suspected terrorists and creates a legal scheme in which almost any act that upsets the stability of the state can be tried under the Penal Code and accorded punishments as extreme as death and/or life imprisonment with hard labor. Under the country’s new Constitution and international legal obligations, Egypt has a duty to protect the rights of both suspected and convicted persons, as well as the rights of everyday citizens. The leaked drafts of recent anti-terrorism legislation only broaden the already-problematic definition of terrorism and empower state security to crackdown without accountability.

Solidifying a security state in which citizens can be accused of terrorism for publishing political opinions, and in which suspects can be detained without formal charge, only deepens a sense of injustice that may encourage the very instability that the nation is, ironically, attempting to remedy.