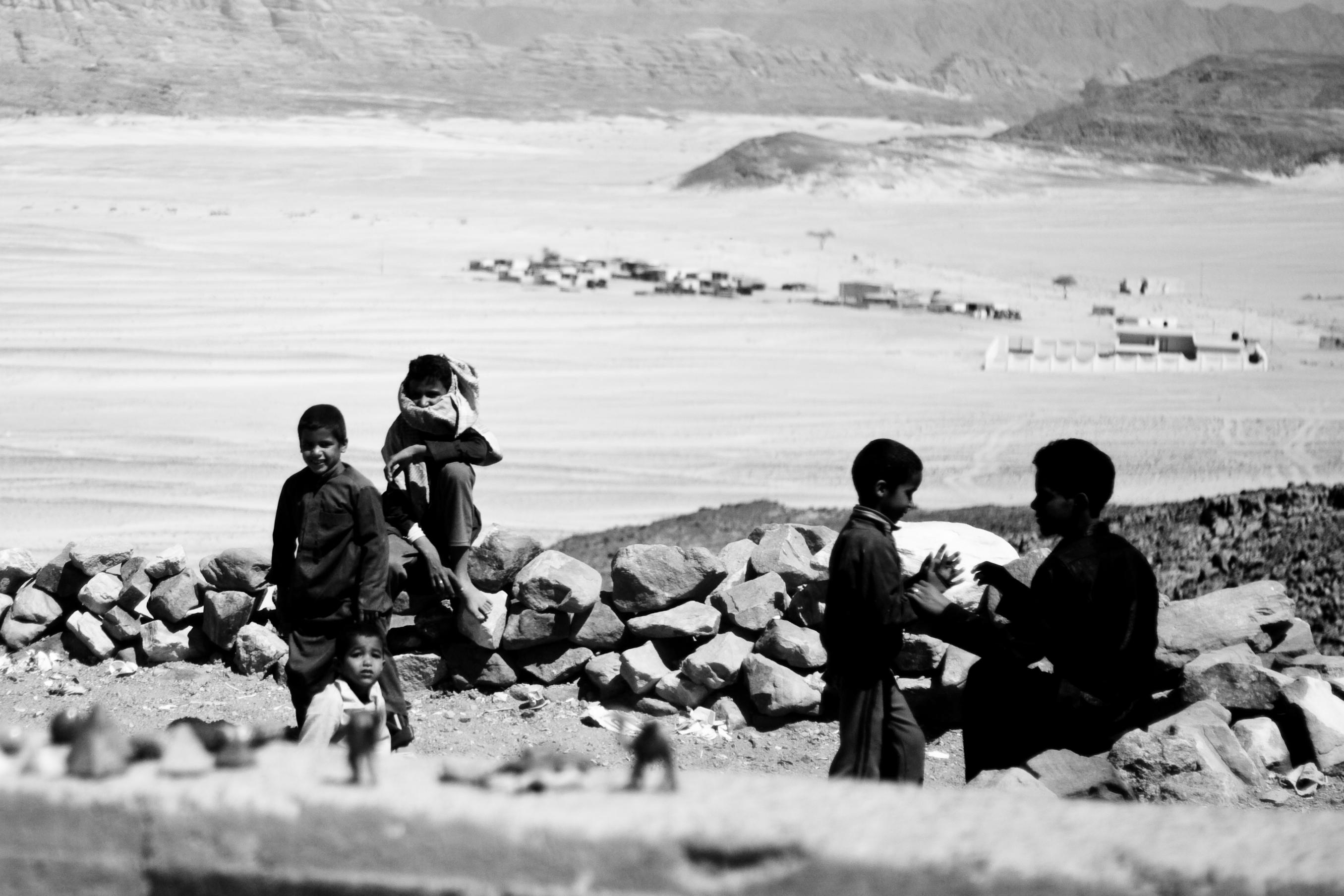 Throughout three years of reporting on Sinai’s unfolding events, researching its intertwined politics and security, and sifting through its unending social and economic issues, I came to realize that, over decades, the residents of Egypt’s eastern frontier continually landed at the bottom of the regime’s plans and policies, and sometimes were the victims of both this marginalization, and the threat of violence from extremist groups operating in the area. Due to its geographic nature, bordering the Gaza Strip and Israel, the north-eastern corner of Sinai received the majority of injustices.

In late 2012, two Bedouin farmers from Rafah’s Al-Rmeilat tribe traveled to Cairo to buy needed equipment for a new irrigation system. Their small journey was not necessarily threatening, but had the unfortunate fate of landing in the crosshairs of regional and domestic security politics; a few months after Muhammed Morsi had been elected to the presidency, and after terrorists had commanded attention with an August attack on the Israeli border, suspicions ran deep.

The farmers had learned from Palestinian counterparts—who are, notably, in far more constant communication with North Sinai than the Egyptian authorities—that installing a specific electronic timer over a certain kind of water pump guarantees cheap and safe irrigation. This kind of technology is essential to survive on the deep wells that Sinai and Gaza have relied on for hundreds of years. The know-how comes to Gaza from Israel while the equipment was normally shipped from Cairo to Rafah, smuggled through the underground tunnels to the Gaza Strip. The farmers, who could not afford the higher price of the smuggled materials, traveled to find them in Cairo.

The downtown Cairo merchant believed he landed the jackpot by catching terrorists shopping for bomb-making materials. “Electronic timers, pipes, wires, dialects that sounded like Palestinian, the two men fit the description of terrorists repeated by the state media for almost two decades,” said Mostafa Singer, a prominent activist and writer from Sheikh Zuweid.

The police arrived in 15 minutes and arrested the farmers. They remained in detention for several months.

By February 2014, Morsi had already been toppled and the military campaign in North Sinai had reached unprecedented hostility; I sat on the bottom floor of Ayman Mohsen’s still-under-construction house. Mohsen, an aspiring multimedia journalist in his mid-twenties, lived in a three story building that stood atop one of Sheikh Zuweid’s hills, overlooking the majority of the town.

Mohsen’s father had turned one of the to-be-tiled rooms into a Bedouin-style reception area with a fire pit, a few cushions, and a pile of wood in one corner. When I commented on how sweet the burning wood smelled, the father—who spoke infrequently, but wisely—replied:

“Yes, it’s from the olive and peach trees destroyed by the military campaign.”

The ruined wood of hundreds of acres of olive, peach, and citrus groves not only fueled the pit in this house, but represented the destroyed fieldsthat provided a livelihoodfor unfortunate farmers.To add insult to injury, the destroyed farms most probably included the same one that once awaited a new irrigation system before its owners were thrown in detention.

Walking out of the house into the grimness of Sheikh Zuweid’s night, Mohsen pointed out that the northern and southern facades of his house were scarred by several bullet holes. North of the hill where Mohsen lived stand the Zuhour Military Barracks, and south of it stand the Sheikh Zuweid police compound.

A government sponsored committee was charged with surveying the farmers’ losses caused by the military campaign in El-Arish, Sheikh Zweid and Rafah. And in May 2014, the Agriculture Ministry’s North Sinai Deputy, Atef Matar, unsurprisingly declared that “350 thousand trees were harmed.”

“The losses were surveyed in order to be reported to the responsible authorities and to decide the one responsible for compensating the farmers,” added Matar.

It is apparent: what happened to the farms of North Sinai is a microcosm of what happened to the whole society of North Sinai. It was simply caught between a military campaign and a growing militancy, and both fired their weapons with impunity and zero precision. Speaking to victims of the unfolding events in Sinai becomes confusing—the people who curse the militant groups with hatred are also those who condemn the blind and heavy-handed tactics of the regime that have sometimes left them homeless, farm-less, or crying over loved ones.

Some ten miles east of Shiekh Zuweid stands the Rafah Crossing Terminal.The farm of the Bedouins detained in Cairo was located in a village south of the terminal, while the borderline with Gaza running north toward the Mediterranean was dotted by hundreds of clandestine smuggling tunnels. The contrast between the farming and smuggling communities is simply staggering, yet, when the recent military campaign began, they both received similar treatment:a grove of 20 olive trees providing an annual income of less than $1000 USD per yearto a family of five or more was no different in the eyes of the Egyptian military than a kilometer-long tunnel generating hundreds of thousands of dollars to only one smuggling don.

The majority of the smuggling tunnels were destroyed—an action taken by the Egyptian military that pleased the majority of North Sinai’s residents and a lot of those who were neck deep in smuggling businesses since the early 2000s. Everyone hoped that crushing the black economy would open a window for lawful prosperity, but the hopes were short lived.

“I make money from it and the authorities have turned a blind eye on my smuggling business for several years, but I risk my life everyday and I know that sooner or later I will be hunted down by the same authorities,” a smuggler from Rafah told me in November 2012, after making me pledge not to mention his name. “Let them destroy [the smuggling networks] and build us some factories and infrastructure.”

What he said turned out to behalf true. In December 2013 his tunnel was destroyed, his house in Mehdeyya, south of Rafah, was shelled by an Apache gunship, and his farm was razed—but neither factories nor infrastructure were built.

Before the smuggling business exploded in Rafah, coinciding with the Israeli withdrawal from Gaza in 2005, poverty was rampant and unemployment was skyrocketing. Back then it was normal to see a family of five living in a shack made out of palm leaves. The tunnels multiplied in proportion with the intensity of Israel’s stifling of the Gaza Strip, and Hosni Mubarak’s regime watched as the economy of North Sinai became dependent on smuggling. The military campaign bombed the border area not only back to the state it was in duringthe 1990s before the smuggling tunnels, but back to its stateinthe 1980s when the Israeli military had just withdrawn after a lengthy occupation.

“Agriculture wasn’t generating enough income, and the smuggling tunnels lured the overwhelming majority of the workforce. Now both agriculture and smuggling are eliminated,” said Mona Barhom, a prominent activist from Rafah. “Not to mention destroying the already debilitated infrastructure, the incompetent authorities and the relentless militants.”

Since Morsi was toppled on July 3, 2013, telecommunications and internet networks have been suspended for over 12 hours every day. A choking curfew is imposed on two levels: it applies to highways west of El-Arish starting at 7p.m., while in Sheikh Zuweid and Rafah it applies in and out of towns starting at 4 p.m. and is far more deadly. More than five people were killed and others were injured merely for driving close to checkpoints or for simply being near mobilizing military convoys. As for running water, both Sheikh Zuweid and Rafah have suffered inexplicable, week-long suspensionsat least four times,as well as countless day long suspensions over the past year.

Mohamed Youssef, a North Sinai Water Authority engineer, was shot dead by military personnel at a checkpoint on March 4, 2014as he drove to Sheikh Zuweid in broad daylight to oversee the maintenance works required for the town’s water network. The 29-year-old engineer died a few weeks before the birth of his first child. And akin to everyone who fell victim to the military campaign’s widespread collateral damage, his family was never compensated.

The military campaign might have crushed the newly-established militant strongholds and wrecked a decades-old, multi-billion dollar smuggling economy, but so far it has utterly failed to reach a solution to political, economic, and societal issues that have existed since long before the first tunnel was dug. Worse yet, it has left behind a community more resentful than ever. As for security, Sinai remains relatively calm—only because of the iron grip imposed by tanks, Apache gunships, and randomly-shooting AK47s.

The only accomplishment left by the year-long military campaign is one critical and unanswered question: what will happen if the iron grip loosens?

After more than two years of massive military budgets drained by Sinai’s instability and unprecedented since the Camp David peace accords that demilitarized the majority of the peninsula, accompanied by a staggering economic depression and a rising popular resentment, this iron grip will loosen sooner or later.