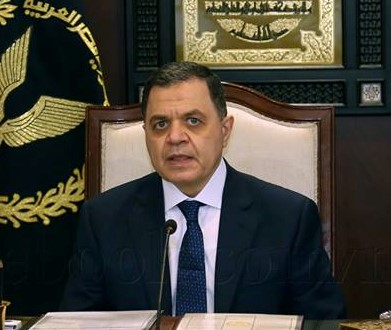 Mahmoud Tawfiq Abdel Gawad Qandil was born August 3, 1961, in Giza, and graduated from the Police Academy in 1982. Following graduation, Tawfiq worked for various sectors within the Ministry of Interior, including the Cairo Security Directorate, before joining the State Security Investigations Service and later its successor agency, Egyptian Homeland Security (also translated as the National Security Agency). At Homeland Security, he served as director of the agency’s external operations before being promoted to deputy director of the entire agency in 2015. At State Security and Homeland Security, Tawfiq was reportedly involved in monitoring and countering a number of terrorist groups, as well as the Muslim Brotherhood. In October 2017, days after terrorists ambushed police and killed at least 17 near Bahariya Oasis,  then-Minister of Interior Major General Magdy Abdel Ghaffar issued a limited reshuffle in the leadership of the security ranks, and appointed Tawfiq as the new director of Egyptian Homeland Security.

On June 14, 2018, President Abdel-Fattah El Sisi, having just started his second term in office, reshuffled several key ministries. Tawfiq was appointed as head of the Egyptian Ministry of Interior, replacing Abdel Ghaffar, who had been serving as minister since 2015. Tawfiq, known by his colleagues as “the fox” and a “hunter of terrorists,” has been lauded for his ability to bring enemy combatants to justice, and he has frequently been praised in recent times for his efforts in curtailing operations that the government blames on the Muslim Brotherhood.

No public, contemporaneous reporting exists tying Tawfiq to specific events before his ascent to director of Egyptian Homeland Security. His name appeared on a March 2011 list published by a pro-revolution Facebook group of State Security Investigations Service officers who the group believed should be put on trial, but that list did not make specific accusations of crimes. After his appointment as director of Homeland Security, and again after his appointment as interior minister, biographies listed Tawfiq’s involvement in several counter-terror operations, but his role in those events is unclear.