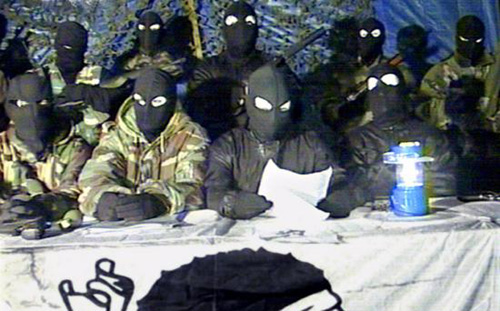 Characteristics: The group wears black masks and carries black flags bearing the confession: “There is no god but God.” The group is known to be well-organized and in possession of highly-advanced weapons.

Recent leadership: Abdel-Fattah Hasan Hussein Salem—Salem was arrested with an aide in October 2013.

Mohamed Eid al-Tihi—Tihi was arrested on November 13, 2011; sources claimed he died in a Cairo prison in February 2012.

Background: An earlier iteration of the group was led by Shokri Mustafa, who became radicalized in Egypt’s prisons during his imprisonment from 1965 to 1971; Mustafa was executed in 1977 after the group assassinated Muhammad al-Dhahbi, the former Minister of Waqf. At this time the group was largely driven underground.

However, the downfall of Mubarak in 2011 marked the emergence of a new entity calling themselves Takfir wal-Hijra, in the Sinai. Other than their reprise of Takfir wal-Hijra ideology and tactics, this group does not appear to have any substantial connections with the Takfir wal-Hijra of the 1970s.

While there has been some limited evidence to suggest the presence of Takfir wal-Hijra “networks” in the Middle East and North Africa throughout the period after 1977, there is no evidence to indicate anything but a nominal relationship between these groups and either the earlier or later group operating in Egypt.

Ideology: Initially the Jama’at al-Muslimin, the media began using the name Takfir wal-Hijra—roughly meaning “Excommunication and Emigration”—because of the group’s belief that jihad is not possible in today’s world, and thus members must isolate themselves physically and emotionally from society.

Notable Attacks: In November 2011, a raid on a Takfir wal-Hijra hideout resulted in the death of one police officer.

While Takfir wal-Hijra has not explicitly claimed attacks in recent years, groups with similar tactics and characteristics have enacted attacks in Sinai, including attacks on January 29 and February 7, 2011. Reports indicated that dozens of men carrying machine guns, rocket-propelled grenades, and other arms attacked a police station in Sheikh Zuweid, leaving five dead in the January incident, and injured two at a police barracks in Rafah in the later one.