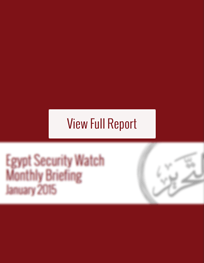 In the interest of providing the most accurate and timely information on which to assess security developments in Egypt, the Tahrir Institute for Middle East Policy (TIMEP) presents the fourth edition of its monthly Egypt Security Watch Briefings. These briefings will serve to update TIMEP’s first full comprehensive report: Egypt’s Security: Threat and Response.

The report and briefings are part of our larger, ongoing Egypt Security Watch project, which provides the most comprehensive available resource to monitor Egypt’s security situation, including an interactive map plotting all instances of violence or state operations, state actor, and terror group profiles, and expert analyses. Please find attached the fourth monthly briefing for January 2015.

Also in January, TIMEP revised and updated several of its profiles. These included an update to the profile of Shoaib Siaam, who was reassigned from his post as head of the Central Security Forces, and the addition of a profile of Medhat Menshawy, who replaced Siaam. Updates were added to the profile of Osama Askar, who was promoted to lead a unified command in the Sinai Peninsulas.