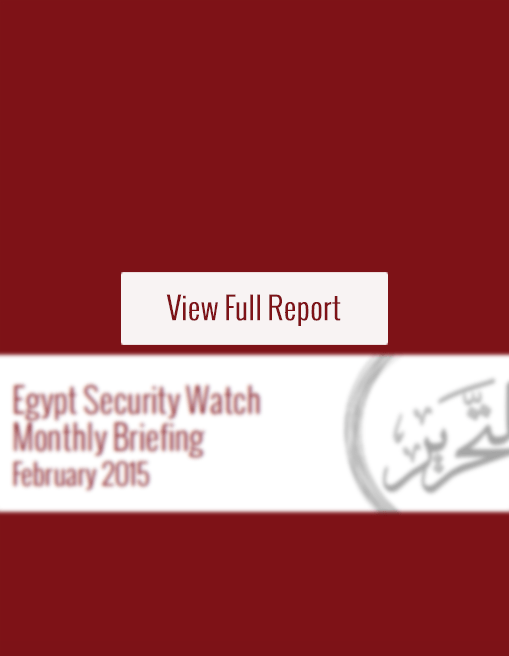 In the interest of providing the most accurate and timely information on which to assess security developments in Egypt, the Tahrir Institute for Middle East Policy (TIMEP) presents the fifth edition of its monthly Egypt Security Watch Briefings. These briefings will serve to update TIMEP’s first full comprehensive report: Egypt’s Security: Threat and Response. Please download below the full fifth monthly briefing for February 2015.

The report and briefings are part of our larger, ongoing Egypt Security Watch project, which provides the most comprehensive available resource to monitor Egypt’s security situation, including an interactive map plotting all instances of violence or state operations, state actor, and terror group profiles, and expert analyses.

Notable developments from the briefing include:

February 2015 saw the continuation of a high rate of terror attacks, with 109 attacks reported throughout Egypt.

While there were no large-scale coordinated attacks in February, the month saw the continuation of a trend in the increased use of improvised explosive devices (IEDs), with 49 IED attacks—more than any month in at least ten years

Also in February, TIMEP added a profile of Muhammad Abdellah, who replaced Osama Askar as the Commander of the Third Field Army headquartered in Suez and operating in South Sinai